Say hello to the "bathroom bill" for the third time this year — a proposal that has raised a divide between conservative and moderate Republicans and the rest of the Texas Legislature this year. The Senate, maintaining its full sprint just three days into the special session, quickly sent measures that would regulate restrooms for most transgender Texans to a committee that will hold a hearing on the legislation this morning. Here's what you need to know:

• Quick reminder: Lt. Gov. Dan Patrick's push for the legislation — and House Speaker Joe Straus' opposition to it — is partially why the Legislature is back this summer in the first place. People protested, testified and cried over the bathroom bill during the regular session — one overnight hearing in the Senate saw more than 400 people testify. Tensions over the issue came to a boil between the House and Senate as the 140-day clock ran out, but the measure's back and lawmakers have the next few weeks to decide whether to send a proposal to Abbott's desk.

• Today, testimony could last for hours. But the Senate panel considering the measures are mostly Republicans, and they're expected to quickly approve the legislation and send it to the full Senate for a vote. This fight's been years in the making and the opposition is mobilizing again: The National Episcopal Church urged the bill's defeat and the Texas Association of Business announced a "seven-figure media buy" ahead of this morning's Senate committee hearing. Watch a livestream of the hearing on our site, and follow Texas Tribune reporters Alexa Ura and Emma Platoff for updates.

• There's more happening in the Senate this weekend — like, a 13 meetings in three days type of thing. A Senate panel is considering a slew of local control legislation on Saturday — including efforts to preempt local rules on tree regulations and texting-while-driving — and other committees will later take up local spending limits, a state spending cap, property tax cap measures and teacher raises and benefits, among other things. On Sunday, more Senate hearings will address mail-in ballot fraud, municipal annexation reform and the union dues bill.

• Two other Senate committees are meeting this morning. The Health and Human Services Committee will meet at 9 a.m. to tackle legislation on abortion, maternal morbidity and patient protections regarding do-not-resuscitate orders. Follow Texas Tribune reporters Morgan Smith, Marissa Evans and Andy Duehren for updates on those issues. At 10 a.m., the Senate Education Committee is set to consider school vouchers and other school finance legislation; follow Aliyya Swaby for updates.

• What do you think of the slightly revised version of the "bathroom bill" a Senate panel is taking up today? Tweet us with #MyTexasTake.

• From Ross Ramsey: The special session is now in the hands of the Texas Legislature — not Gov. Abbott.

• See you in court, abortion rights groups told Texas when they sued over a new state law that will ban the most common second-trimester abortion procedure.

• The week-long trial over Texas' political maps ended last week. But will Texans see a remedy for the the state's alleged illegal redistricting?

• Former U.S. Sen. Kay Bailey Hutchison — who was nominated by President Trump to be the next ambassador for NATO — vowed she'd crack the whip on Russia, if she was confirmed for the position.

Riding with ICE: 'We're trying to do the right thing,' NPR 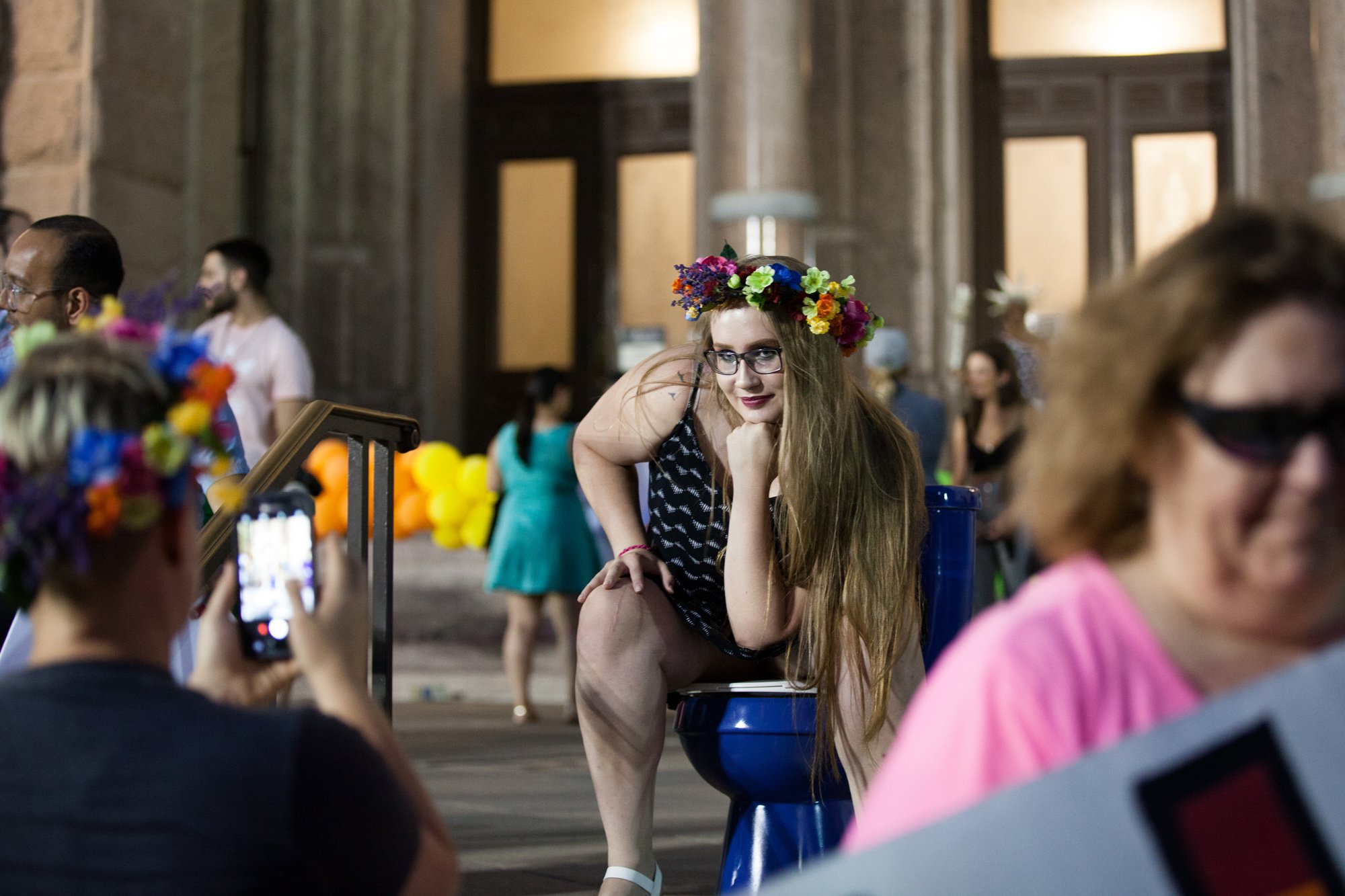 An attendee at the Stonewall celebration posed with a toilet on the steps of the Texas Capitol on June 28. Organizers from Austin Pride situated the rainbow-colored toilets in front of the building to demonstrate opposition to the "bathroom bill." Photo by Austin Price. See more photos on our Instagram account.

"Two-thirds of those serving life in Texas are people of color."

— Ashley Nellis, a research analyst with The Sentencing Project, and Elizabeth Henneke, an attorney, on why Texas should stop spending billions to incarcerate people for life.