Harvey continued to dump rain on the Houston area Tuesday as it headed east toward Louisiana. Here's what you need to know:

• In Houston, more than 50 inches of rain battered the area over just a few days. At least 22 are dead from Harvey, per reports, and Houston Mayor Sylvester Turner announced Tuesday he was imposing a midnight-to-5 a.m. curfew on the city "to prevent potential criminal acts." Harris County — home to more than 4 million people — had around 25 to 30 percent of its land flooded by Tuesday afternoon, according to Jeff Lindner, a meteorologist from the area. Another crazy bit, per Lindner: "1 trillion gallons of rainfall has fallen in Harris County over 4 days which would run Niagra Falls for 15 days."

• President Donald Trump spent yesterday in Texas, first visiting Corpus Christi and then Austin to survey recovery efforts. The president was joined by First Lady Melania Trump and Gov. Greg Abbott, who praised Trump and his administration for its swift response to the disaster. Be on the lookout for Congress to consider what Trump dubbed on Tuesday a "costly proposition" for aiding the state financially in recovery efforts. The president will be back in Texas this weekend, when he's likely to visit the Houston area.

• Other things happening throughout the state: Several Texas schools have had to delay their first day of classes thanks to Harvey — and some of them have even become shelters, aiding evacuees from the state coast who fled the storm. Also, the Texas Department of Transportation is set to immediately get $25 million from the federal government to help repair state roads, signs and traffic signs, among other things, Abbott announced Tuesday.  And two more Texas prisons have been evacuated as flooding has continued, bringing the total evacuation count to five prisons and nearly 6,000 inmates.

• From Ross Ramsey: If someone was popped seven or eight times over the same thing, would you think they have a problem?

• The state's new "sanctuary cities" law goes into effect Friday — unless a court blocks it.

• Harvey and its aftermath is still pummeling through Houston, but the city's reservoirs aren't likely to fail.

• Multiple Texas schools have had their start dates delayed because of Harvey. Instead, some of them have become shelters.

• Here are some scenes from Harvey we've captured over the last several days.

• A couple ExxonMobil refineries have been damaged because of Harvey and have released hazardous pollutants into the air. And some people are worried that as floodwaters rise, leaks could occur at one of Harris County's dozen or so toxic waste sites.

Join us today for a conversation with state Reps. Chris Paddie, R-Marshall, and Gary VanDeaver, R-New Boston, at Texarkana College. You can also watch a livestream here.

Law enforcement in Houston is starting to crack down on looters who are trying to capitalize on Harvey. (The Houston Chronicle $) 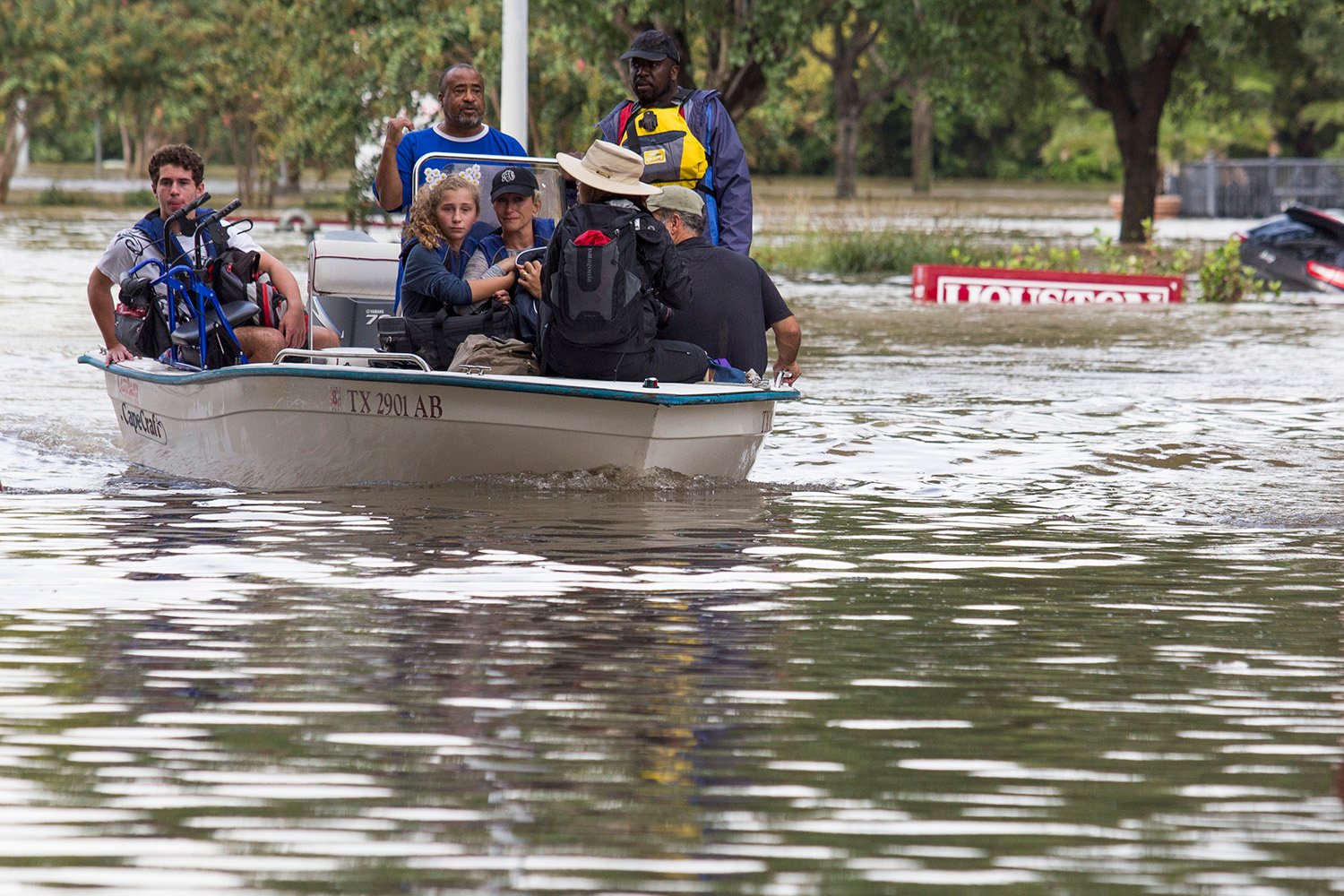 Evacuees fled flooding in a boat with a nearly submerged Houston sign behind them on Aug. 29. Photo by Michael Stravato for The Texas Tribune. See more photos on our Instagram account.