As the Texas Legislature heads into its final weekend before the regular session ends Monday, lots of parts at the Capitol are still churning. A special session isn't entirely out of the equation yet — House lawmakers face a deadline tonight, both chambers are slated to vote on the proposed state budget soon and big bills remain subject to negotiations. Here's what you need to know:

• Another day, another deadline. House lawmakers have until midnight tonight to act on Senate amendments, meaning they can agree with changes senators made to bills, or send them to a conference committee where members from both chambers can hash out the differences. But time is no longer on anyone's side, and after tonight, there will be around 72 hours left on the Legislature's 140-day clock.

• Both chambers will likely vote on a state budget Saturday. The $217 billion document has around $1 billion from the state's Rainy Day Fund and $106.8 billion from the state General Revenue, said Nelson, adding, the compromised budget "prioritizes education, addresses transportation, secures our border and strengthens protections for abused and neglected children."

• Key bills are still subject to negotiations. Some of this year's most controversial subjects — the "bathroom bill," voter ID overhaul, property tax reform and the sunset safety net bill — are still winding their way through the legislative process. Lt. Gov. Dan Patrick told reporters he's willing to go to a special session if the House doesn't act on property taxes and a "bathroom bill" — which would regulate which restrooms transgender Texans can use. Gov. Greg Abbott said Thursday he wanted to see both chambers compromise and come together in the final days of session.

• The consulting firm Public Blueprint is crowdsourcing a vote count for members of the State Republican Executive Committee who will pick the next Texas GOP chair. Houston-area businessman Rick Figueroa and James Dickey, the chairman of the Travis County Republican Party, are running to replace Tom Mechler, who resigned Saturday. SREC members will elect someone to finish Mechler's term at their June 3 meeting.

• From Ross Ramsey: Texans will get a close look at the state's top leaders over the next three days — the end of the regular legislative session — as they test their negotiating skills.

• A measure to repeal the widely unpopular Driver Responsibility Program made it out of the Texas House but died before hitting the Senate floor.

• The Texas House and Senate struck a deal on the "Buy American" iron and steel bill.

• Gov. Greg Abbott appears to be undecided on whether he will sign a proposed statewide ban on texting while driving that is now on his desk.

• Dallas' failing pension fund is poised for an overhaul as it heads to Gov. Greg Abbott's desk for a signature.

• Fearing a loss in 2018, Texas Republicans in Congress want the Texas Legislature to hold a special session on congressional redistricting — but Austin's not interested.

• There is still time for the Texas Legislature to strike a deal averting a special special, Gov. Greg Abbott said.

• Uber and Lyft are returning to Austin on Monday, the same day Gov. Greg Abbott is expected to sign ride-hailing legislation passed by Texas lawmakers.

Top colleges doing the most for the American dream, The New York Times ($)

May 31: Catch a conversation with U.S. Rep. Joaquin Castro, D-San Antonio, in person or on our livestream. 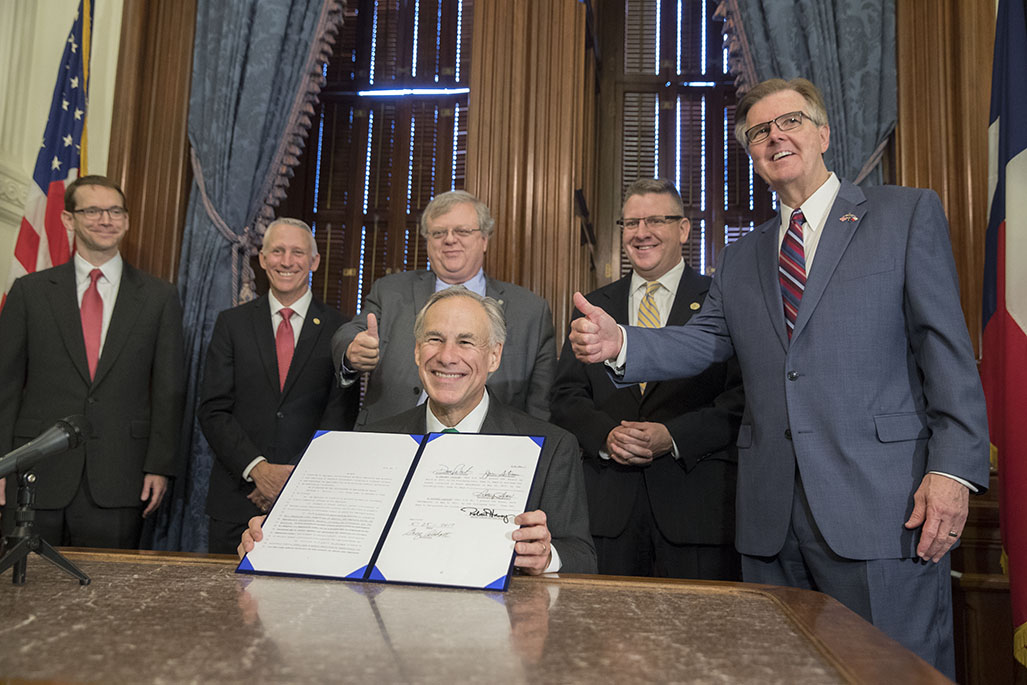 Gov. Greg Abbott displays Senate Bill 7, which toughens the penalties for inappropriate student-teacher relationships, after signing it into law alongside other Texas lawmakers and officials on May 25. Photo by Bob Daemmrich. See more photos on our Instagram account.

"The main thing I want to see is the House and Senate coming together. This is going to require compromise ... by both sides.”

— Texas Gov. Greg Abbott about the Texas Legislature avoiding the possibility of a special session.

The Brief is written and compiled by your morning news baristas, Bobby Blanchard and Cassi Pollock. If you have feedback or questions, please email thebrief@texastribune.org. Patrick Svitek contributed to this edition of The Brief.