Foreign terrorist groups and illegal immigration are the greatest threats to the United States, according to voters surveyed for the latest University of Texas/Texas Tribune Poll.

Polarization and intractable partisan conflict was their third greatest worry.

Republican and independent voters were in accord on the list; Democrats left immigration out of their top threats, behind gun violence/mass shootings and decaying American infrastructure.

Those concerns were echoed in voters’ responses to questions about the most important problems facing the state and the country.

Overall, immigration and border security topped the list of most important state problems, accounting for a third of all responses. They were followed on the list by political corruption/leadership, education and declining oil prices.

Republican voters account for the top ranking, as 54 percent of them had either border security or immigration as the most important problem. Both Democrats and independents listed immigration as one of their top choices, but they were much more likely to choose other issues. Democrats listed political corruption/leadership as their top concern; for independents, that came in second.

The voters’ list of most important problems facing the country was topped by the economy, national security/terrorism, political corruption/leadership, federal spending/national debt and immigration.

Oil and the economy

Among those who had heard at least something about declining oil prices, 62 percent said they are “somewhat” or “very” concerned. About a third said they are not particularly worried about the changes in price for a barrel of oil. 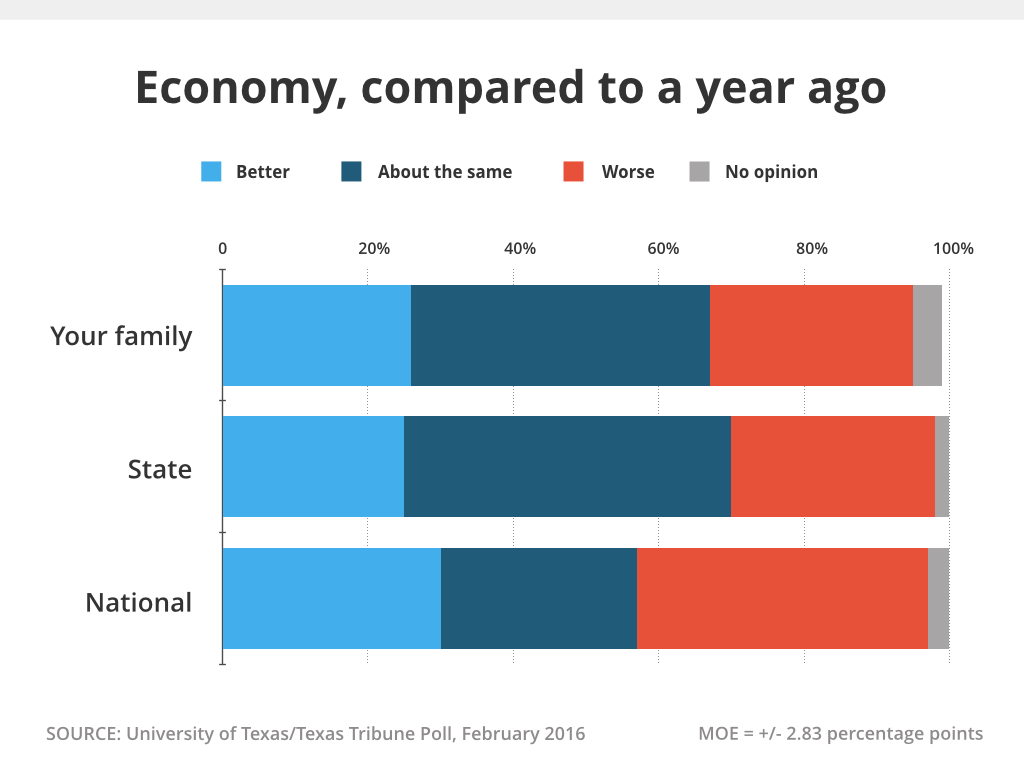 Two in five voters report that their family economies are about the same now as they were a year ago, while 26 percent said they are better off now and 28 percent said things are worse now than at this time last year.

As in previous UT/TT Polls, Texas voters are more positive about the direction of the state than the country — and there’s a partisan tang to those numbers.

Democrats were split on the country’s direction, 41 percent to 43 percent. But 88 percent of Republicans said the country is going in the wrong direction. The numbers flipped on the state assessment: 49 percent of Democrats think the state is going in the wrong direction, while 61 percent of Republicans said the state is on the right track. Each group was more likely to give positive ratings to the government headed by an executive from their own party.

President Barack Obama, Gov. Greg Abbott and U.S. Sen. Ted Cruz get the highest marks when Texas voters rate the work being done by top officeholders and institutions. But Obama and Cruz also get some of the worst marks. 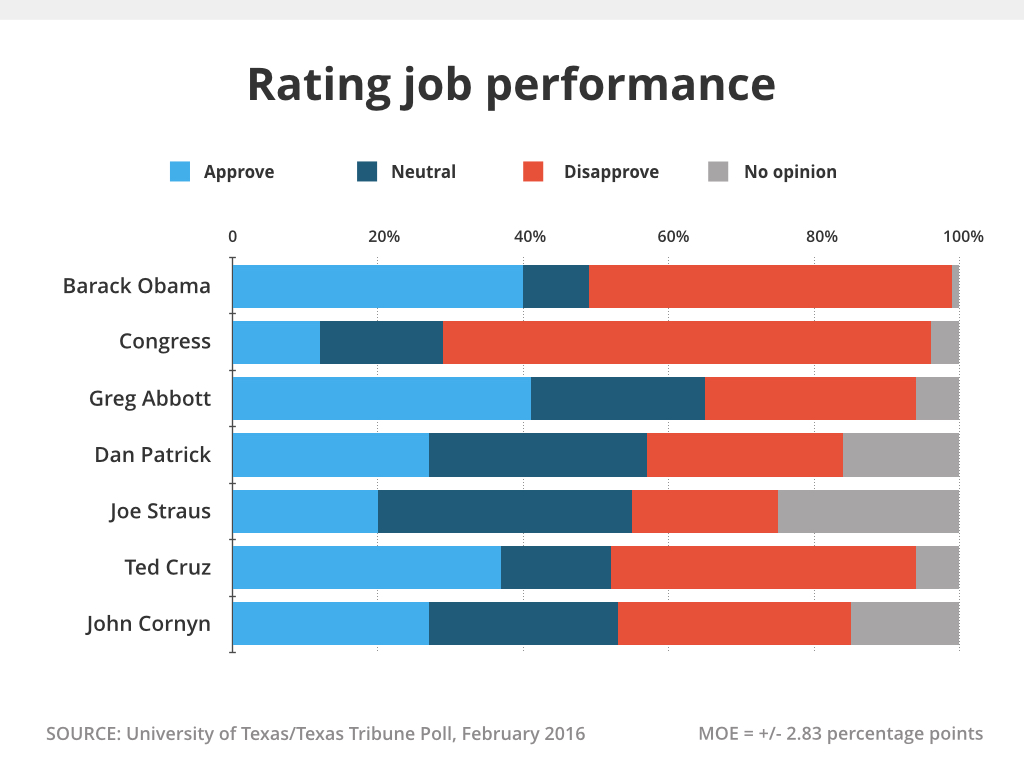 Congress gets the worst ratings on job performance: 12 percent of Texans approve of the work that body is doing, while 67 percent disapprove.

U.S. Sen. John Cornyn is doing a good job according to 27 percent of Texas voters, while 32 percent disapprove of his work.

This is one of a series of stories from the latest University of Texas/Texas Tribune Poll. Also today: Texans on handguns and other issues. Tuesday: How the candidates stand a week before the Republican and Democratic primary elections. Wednesday: Voter impressions of the presidential candidates. Thursday: Voters on Muslims and other immigrants, and on handguns.