With a week remaining before the Texas Republican primary, U.S. Sen. Ted Cruz has an 8-percentage-point lead over Donald Trump, according to the latest University of Texas/Texas Tribune Poll.

Cruz had 37 percent of the vote in the poll. Trump, the businessman and TV personality who finished first in two of the three states that have already voted, had the support of 29 percent, followed by U.S. Sen. Marco Rubio at 15 percent.

The rest of the candidates were far behind: Jeb Bush, who dropped out of the race after the South Carolina primary, had 6 percent; John Kasich, 5 percent; and Ben Carson, 4 percent. The rest of the candidates on the Texas Republican ballot barely registered: Rand Paul, Carly Fiorina, Rick Santorum, Elizabeth Gray, Lindsey Graham, Mike Huckabee and Chris Christie each got 2 percent or less. Several of those candidates have already suspended their campaigns but were included in the poll because all of their names remain on the Texas ballot.

“These numbers reflect what most  of us think was going on in Texas: It’s decent ground for Donald Trump because he’s a national candidate who’s touched a nerve everywhere, but it displays a little bit of a homefield advantage for Ted Cruz,” said Daron Shaw, co-director of the poll and a professor of government at the University of Texas at Austin.

What looked like a three-candidate race coming out of South Carolina looks more like a two-person race in Texas, with Cruz and Trump almost certainly in position to split the state’s 155 Republican delegates. Among likely Republican primary voters who identify with the Tea Party, Cruz leads Trump 56 percent to 26 percent in the UT/TT Poll. Among voters who identify as Republicans when given the choice to bolt for the Tea Party, the candidates were relatively even: Cruz had 32 percent to Trump’s 30 percent. Rubio had 18 percent of those voters, and 8 percent of those who identify with the Tea Party.

Shaw pointed out that the poll was completed on the eve of the South Carolina primary and said the results there — and Jeb Bush’s decision to drop out — could change the dynamics in Texas. He also said all three of the top candidates have good reason to campaign here since Texas is not a winner-take-all state and strong second- and third-place finishes could win some delegates here.

“Ted Cruz is popular among Texas Republicans, particularly among the more intense conservatives we expect to show up on primary election day,” said Jim Henson, director of the Texas Politics Project at UT-Austin and the poll’s co-director. “Second, Texas is not as unlike the rest of the United States as we sometimes like to think. Donald Trump’s celebrity and substantive appeal — such as it is — clearly has an audience among Texas Republicans.”

Henson also noted Bush’s small numbers. “There was no redemption in Texas for Jeb Bush, even before South Carolina,” he said. 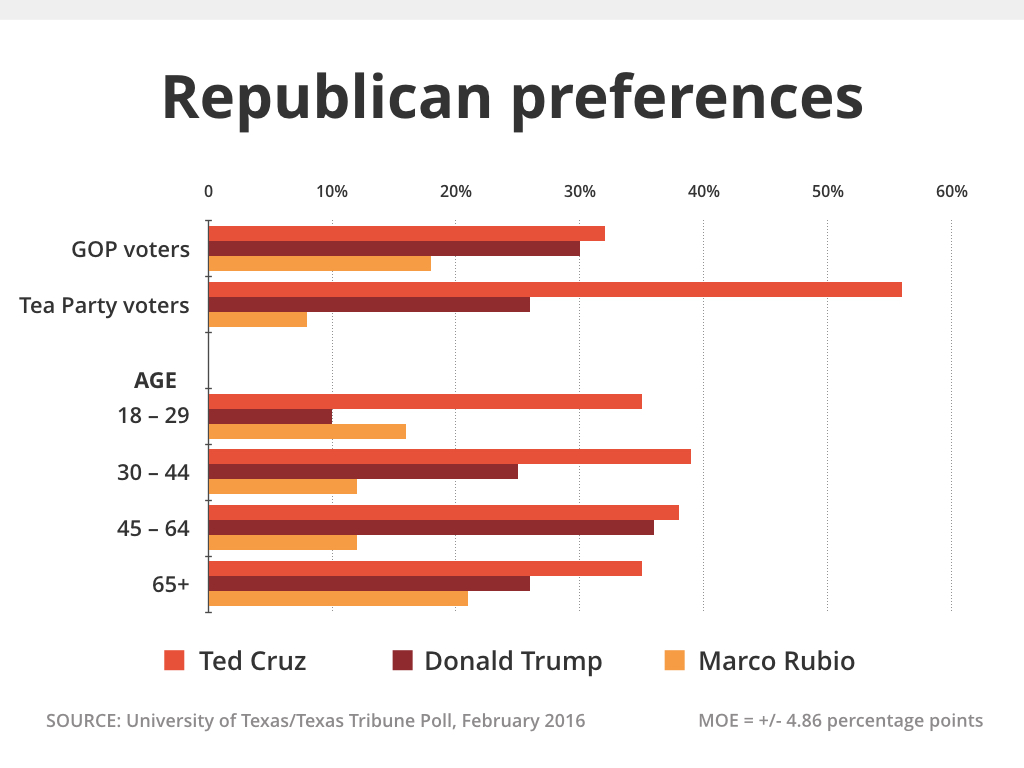 Cruz led in all age groups, notably among voters ages 18 to 29 and voters ages 30 to 44. Trump pulled close among 45- to 64-year-olds, and Cruz had a 9-percentage-point lead among voters over 65. Rubio had 21 percent of that oldest group — his best showing in the age brackets.

The Cruz and Trump voters were more certain of their choices than the voters attracted to other candidates. More than two-thirds of their voters said they were “extremely certain” about their choice of candidates, compared with 41 percent for Rubio, 29 percent for Carson, 27 percent for Kasich and 22 percent for Bush.

For all of the talk about shaking things up in this year’s elections, only 15 percent of Republican primary voters said that was the most important factor. Their first reason for choosing a particular candidate, with 21 percent, was to “improve the American economy,” followed by giving the Republican Party a good chance to win in November. 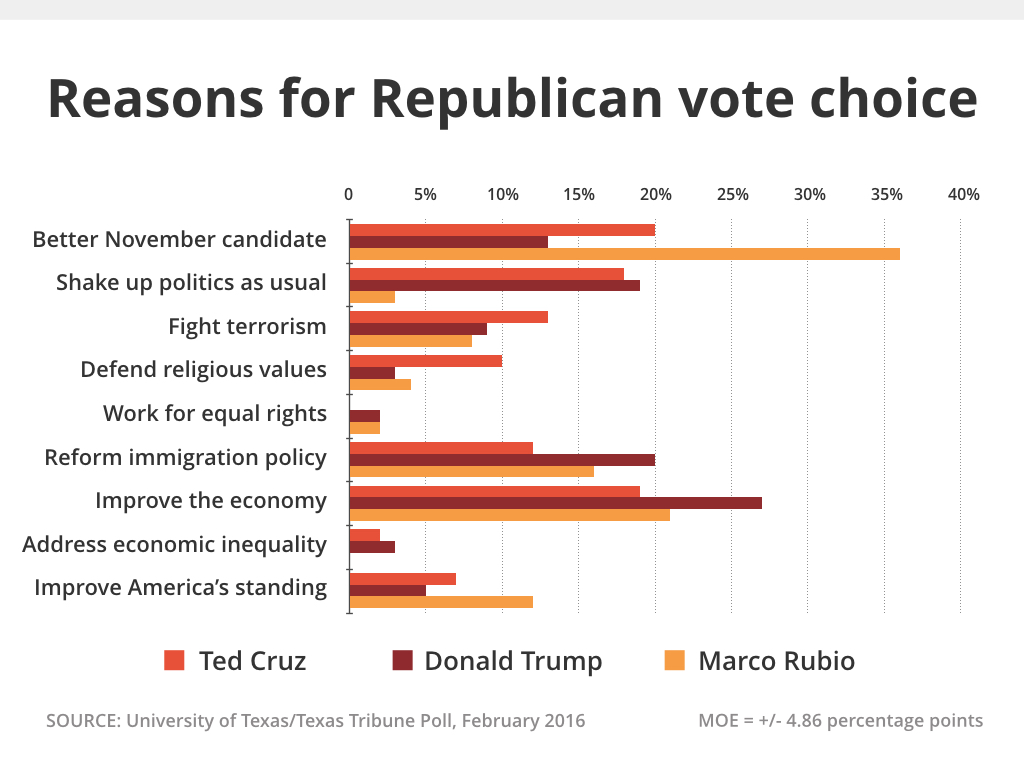 As it turns out, those were also the top two reasons for Cruz voters (he and Trump both got relatively high marks for “shake up politics as usual”). Trump’s voters said "improve the economy" and “reform immigration policy” were their top reasons for voting. More than a third of Rubio’s supporters — 36 percent — said they chose him because they thought having a good chance to win the general election was most important.

Cruz had a significant lead over his opponents among voters with “some college,” pulling 50 percent of those votes to 29 percent for Trump and 6 percent for Rubio. That flipped among post-graduates: Rubio got 35 percent, while Cruz and Trump each got 20 percent. Voters with two years of college favored Trump. Cruz led Trump by six percentage points among high school graduates and among voters with four years of college.

Cruz led the pack with male voters, getting 40 percent of them to Trump’s 26 percent and Rubio’s 15 percent. But Cruz, at 33 percent, and Trump, at 32 percent, were in a virtual tie among female voters. Rubio had the support of 14 percent of those voters.

Correction: After the poll results were published, the pollsters discovered a miscalculation in their margin of error for likely Republican voters. The correct MOE is +/- 4.86 percentage points.

This is one of two stories — the other is about the Democratic primaries — from the latest University of Texas/Texas Tribune Poll, and today’s stories are the first of several from that survey. Tomorrow: Texas voters on which candidates would make great — or terrible — presidents.