Texas voters overwhelmingly support mental and criminal background checks on all gun purchases in the United States — including gun shows and private sales, according to the latest University of Texas/Texas Tribune Poll.

Most Texas voters said they are not particularly alarmed by the state’s new open carry law, which allows people with concealed handgun licenses to carry their weapons publicly without concealing them, though there were significant differences among racial and ethnic groups.

While 37 percent said that new law makes them feel “less safe” than before, 22 percent said they feel “more safe” and 34 percent said open carry has “no effect” on their feelings of safety. The law took effect on Jan. 1.

Republican and independent voters were most likely to say they feel no effect from the change, while 62 percent of Democrats said the law makes them feel less safe. Among voters who identify with the Tea Party, 46 percent said they feel more safe since the new law took effect.

“It shows some of the shades of ambiguity. There is a default position among a lot of conservatives for whom this is not a front-and-center issue: That [position] is ‘no effect,’”said Jim Henson, director of the Texas Politics Project at the University of Texas at Austin and co-director of the poll. “We’re a state where the default position is a relatively pro-gun-rights culture.”

Income inequality and the minimum wage

Most Texans see income inequality as a problem but don’t think the federal government should do anything about it, the UT/TT Poll found.

A substantial number of the state’s likely voters — 44 percent — consider income inequality a “major problem.” Another 30 percent said it’s a “minor problem.” One in five said it’s no problem at all. 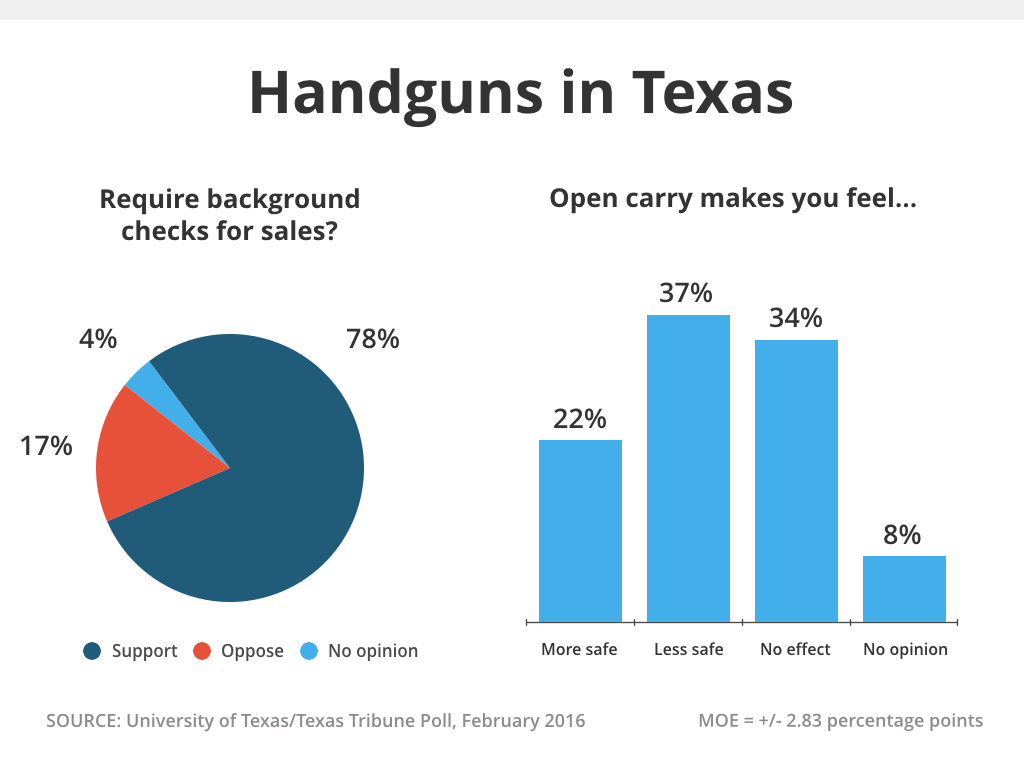 Daron Shaw, co-director of the poll and a government professor at UT-Austin, said many voters are conceding the point that incomes are out of balance without agreeing that the federal government is the best source of a solution. “Those who think it’s a major problem and who think the government should do more are about the same size,” he noted.

That said, 62 percent of those Texans said they would favor an increase in the federal minimum wage, which is currently $7.25 an hour. About a quarter of them, 27 percent, oppose an increase.

This is one of a series of stories from the latest University of Texas/Texas Tribune Poll. Also today: Texans on immigration and refugees. Tuesday: How the candidates stand a week before the Republican and Democratic primary elections. Wednesday: Voter impressions of the presidential candidates. Friday: The mood of the state.