Hillary Clinton’s lead over Bernie Sanders has narrowed considerably in Texas but remains in the double digits among the state’s likely Democratic primary voters, according to the latest University of Texas/Texas Tribune Poll.

The former secretary of state is leading, with 54 percent, a week before the Texas primary, while Sanders, a U.S. senator from Vermont, has the support of 44 percent of the respondents.

“This race is narrowing, but not narrowing in a way for the lines to actually cross — especially in Texas,” said Jim Henson, director of the Texas Politics Project at UT-Austin and the poll’s co-director. Clinton will win, he said, but the question mark, is the state’s Hispanic voters and their relatively low propensity to vote. “This will be a double-digit race, but I don’t think it’s going to be a 20-point race.”

Clinton has a formidable base of black and Hispanic voters, while Sanders is doing better with Anglos. She leads 70 percent to 27 percent among black voters and 60 percent to 37 percent among Hispanic voters. Sanders, meanwhile, has the support of 55 percent of white voters to Clinton’s 44 percent. Clinton’s advantage, the pollsters said, could swell if her campaign can boost the numbers of Hispanics voting in the state.

“It’s her state to lose,” said Daron Shaw, co-director of the poll and a professor of government at the University of Texas at Austin. “Whether this race is 10 points or 18 points rests almost entirely on your opinion of whether Hispanics are going to turn up to vote.” 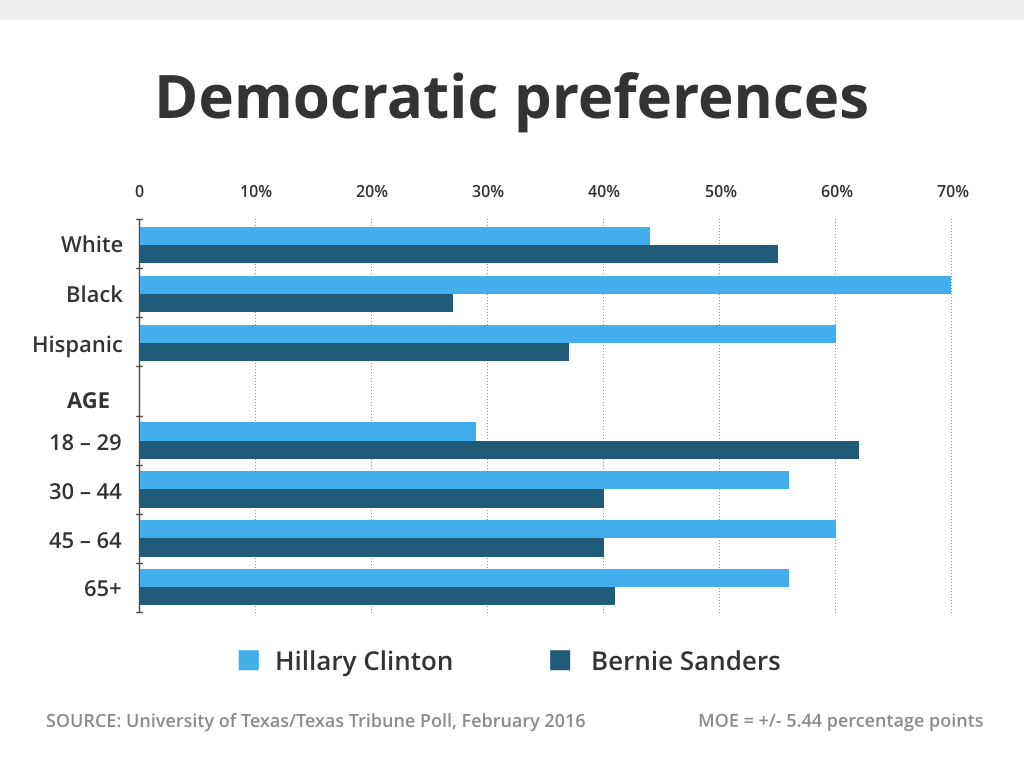 Clinton is also firmly in front in all but one age group, with more than 55 percent of the voters age 30 and older. Sanders has about two-fifths of those voters. But he’s the clear favorite of 18- to 29-year-olds, with 62 percent of them backing him and only 29 percent backing Clinton.

Voters who identified themselves as liberals favored Sanders 51 percent to 48 percent; self-identified moderates among the likely Democratic primary votes were with Clinton, 64 percent to 36 percent.

Voters with post-graduate education and those with no high school favored Sanders; high school graduates and those who went to college for any length of time favored Clinton. Churchgoers among the Democrats are Clinton voters, with the exception of those who said they attend church only once or twice a year. Texas Democrats who never go to church were split between the two candidates.

The Democrats have a gender gap, but Clinton has a clear advantage. She and Sanders were virtually tied among male voters — Clinton had 48 percent, Sanders 47 percent. But Clinton was the favorite of 58 percent of female voters while 41 percent favored Sanders.

Texas voters seem fairly certain of their choices for the Democratic nominee for president: 69 percent of Clinton’s voters and 62 percent of Sanders’ voters said they were “extremely certain” about their choice. All but a few of the remaining voters identified themselves as “somewhat certain” of their choice. 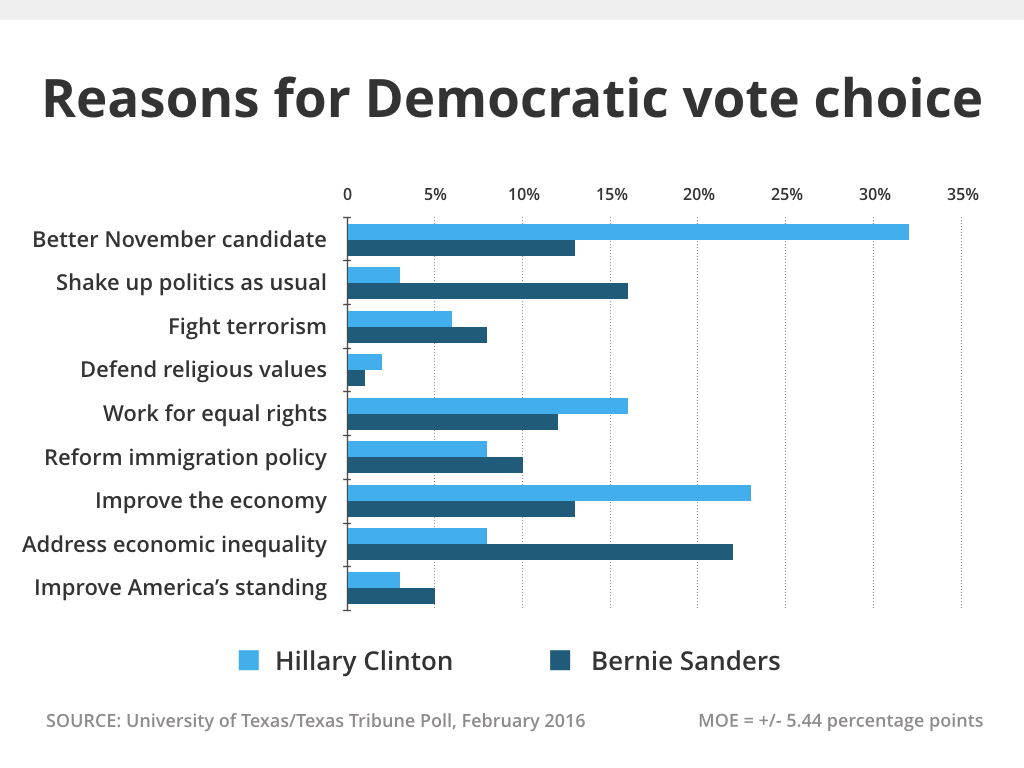 Why are they voting the way they’re voting? Among Clinton supporters, 32 percent said the most important reason for their vote was to “give the Democratic Party a good chance to win in November.” Another 23 percent said they wanted someone who would “improve the economy." The most important thing to 22 percent of Sanders’ voters was to “address economic inequality in the country,” followed by 16 percent who said they want to “shake up politics as usual.”

Correction: After the poll results were published, the pollsters discovered a miscalculation in their margin of error for likely Republican voters. The correct MOE is +/- 4.86 percentage points.

This is one of two stories — the other is about the Republican primaries — from the latest University of Texas/Texas Tribune Poll, and today’s stories are the first of several from that survey. Tomorrow: Texas voters on which candidates would make great — or terrible — presidents.