According to early vote totals reported by The Associated Press, Rubio led Cruz for second place — 23.7 percent to 20.2 percent. Trump led with 46.5 percent of the vote.

The latest University of Texas/Texas Tribune Poll revealed yesterday who were the leading candidates heading into next week’s Texas primary races: Cruz and Trump for the Republicans and Hillary Clinton and Bernie Sanders for the Democrats.

In today’s installment of the poll results, the survey found that voters overall aren’t that pleased with those candidates. At least 40 percent of Texas voters had unfavorable opinions about all four candidates. 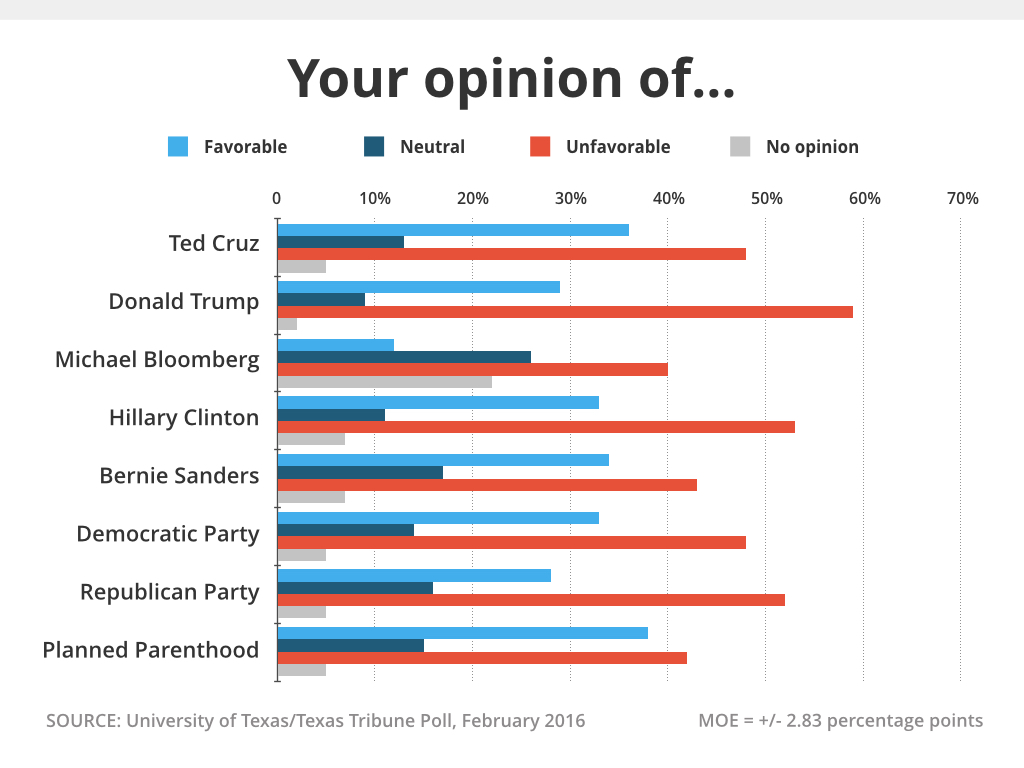 “The suggestion here is that for candidates, particularly Trump, where you have 12 percent who think he could be great,” said Daron Shaw, a professor of government at the University of Texas at Austin and co-director of the poll. “But then you get 42 percent saying he would be terrible, which outstrips everything.

“Hillary is a little bit the same way,” he said. “Even though she is such a known quantity, she’s polarizing.”

How Is Ken Paxton Paying For His Criminal Defense?, by Morgan Smith — How Ken Paxton is paying for his high-octane legal defense team is one of the ongoing puzzles in the criminal case against the Texas attorney general. Paxton has said he is not using public money or government funds, but that leaves more questions than answers.

In Final Weeks, Millions Spent in Handful of House Races, by Alexa Ura — As Texas primary races head into the final stretch, the latest campaign finance reports show House Speaker Joe Straus and a handful of his allies are spending big to fight off their Tea Party-backed challengers.

Former Lawmakers Make Bids to Return to Texas House, by Julián Aguilar and Lauren Flannery — Whether they were edged out in 2014 by thin margins or bowed out years ago and had a recent change of heart, several former House members want back under the dome next year.

•    Gov. Greg Abbott and presidential candidates Ted Cruz and Ben Carson are all scheduled to appear at the Harris County Republican Party’s Lincoln Reagan Day Dinner in Houston at 7:30 p.m., which is being held a day before GOP presidential candidates take part in the final debate before the Super Tuesday nominating contests.

Shouts of ‘liar’ are taking their toll on Ted Cruz’s campaign, The Washington Post

•    The Tribune's Executive Editor Ross Ramsey breaks down via video five things to watch for in the 2016 Texas primaries.

•    Live Post-Primary TribCast on March 2 at the Austin Club

•    Protecting Houston Before the Next Big Storm on March 3 at San Jacinto College Maritime Technology and Training Center in La Porte.

•    A Conversation with Sid Miller, Texas Agriculture Commissioner on March 10 at the Austin Club

•    How High is the Water? A Data Visualization Party on March 13 at Umbel Corp

•    A Conversation with Reps. Craig Goldman, Stephanie Klick and Ramon Romero Jr. on March 29 at Texas Christian University in Fort Worth.

•    A Conversation with Sen. Carlos Uresti and Rep. Poncho Nevárez on April 13 at Sul Ross State University in Alpine