With a week remaining until primary day in Texas, Ted Cruz leads Donald Trump by eight points in the GOP presidential contest while Hillary Clinton leads Bernie Sanders by 10 points in the Democratic contest, according to the latest University of Texas/Texas Tribune Poll.

The pollsters note that the dynamics that are setting up ahead of the March 1 party primaries seem to reflect both Trump's national standing as well as Cruz's popularity among Texas Republicans in his home state. 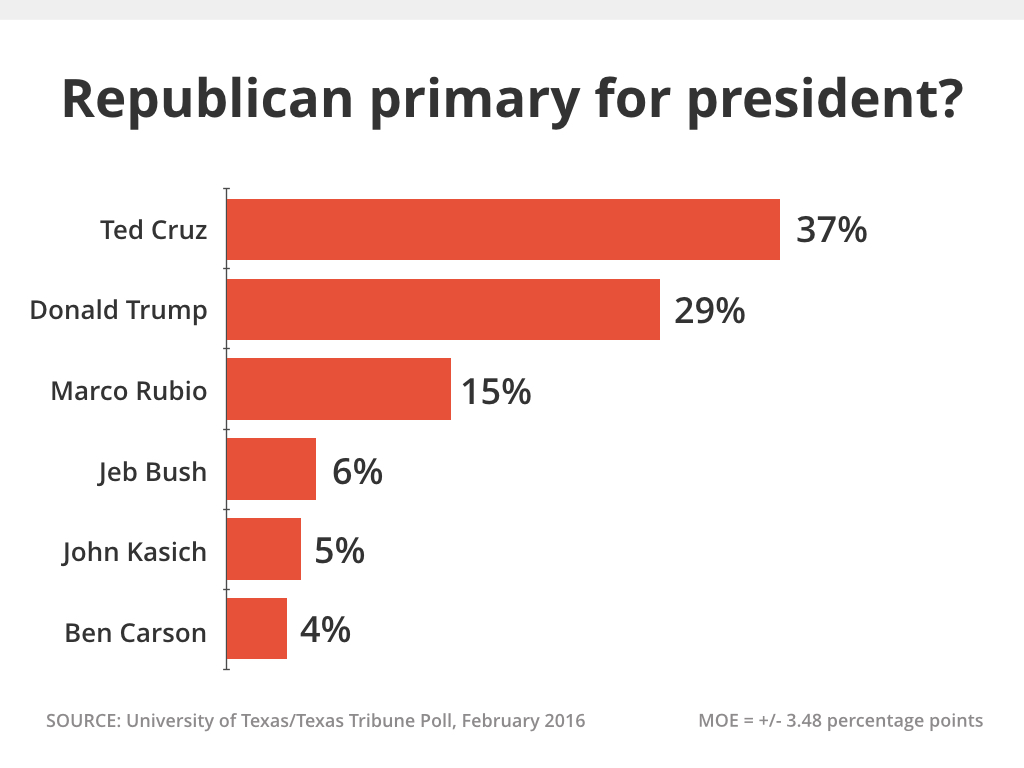 Notable here is that the contest in Texas is shaping up as a two-man race, the Tribune’s Ross Ramsey writes, “with Cruz and Trump almost certainly in position to split the state’s 155 Republican delegates.”

The grain of salt here is that the survey was completed before Saturday’s primary contest in South Carolina and before the decision by Jeb Bush to stop his presidential campaign.

As a result, Ramsey writes, “all three of the top candidates have good reason to campaign here, since Texas is not a winner-take-all state and strong second- and third-place finishes could win some delegates here.” 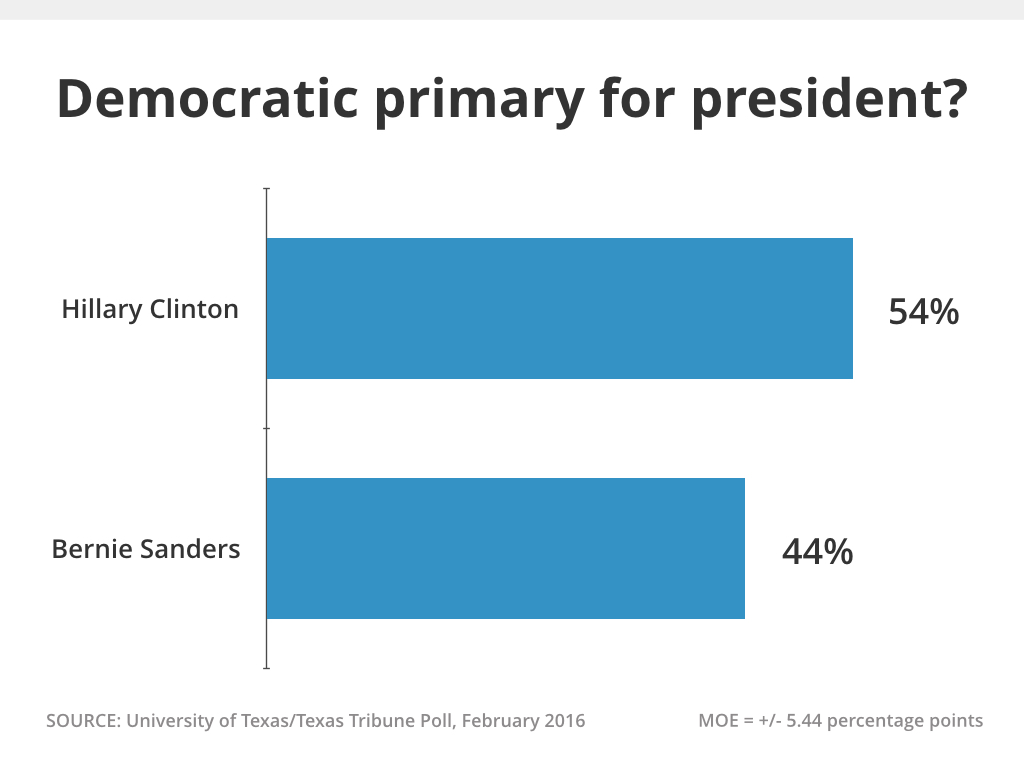 And now, the Democratic race:

Ramsey writes, "Clinton has a formidable base of black and Hispanic voters, while Sanders is doing better with Anglos. She leads 70 percent to 27 percent among black voters and 60 percent to 37 percent among Hispanic voters. Sanders, meanwhile, has the support of 55 percent of white voters to Clinton’s 44 percent. Clinton’s advantage, the pollsters said, could swell if her campaign can boost the numbers of Hispanics voting in the state."

“It’s her state to lose,” said Daron Shaw, co-director of the poll and a professor of government at the University of Texas at Austin, of Clinton’s chances. “Whether this race is 10 points or 18 points rests almost entirely on your opinion of whether Hispanics are going to turn up to vote.”

Border Communities Have Lower Crime Rates, by Julián Aguilar and Alexa Ura — Texas counties along the Rio Grande are relatively safe, state and federal crime statistics show, and they seem to be getting even safer as more law enforcement resources pour into the area. This story is part of our "Bordering on Insecurity" series.

Ted Cruz's Home-State Strength in Question, by Patrick Svitek — Ted Cruz is still favored to win Texas, but it may not be as easy or resounding of a victory as he would like, many Republican strategists say. Billionaire Donald Trump is seen as Cruz's biggest threat at home.

Bill Clinton Pitches Texans on Hillary Clinton, by Jamie Lovegrove and Abby Livingston — The former president's campaign swing, preceded by a Hillary Clinton rally Saturday night in Houston, comes as Texans head to the polls for the second week of early voting — and demonstrates the Clinton campaign's focus on minority outreach.

Battling Dishonesty Claims, Cruz Seeks Campaign Change, by Patrick Svitek — Battling the perception he is running a dishonest campaign, Ted Cruz on Monday asked for the resignation of Rick Tyler, his top spokesman, for what Cruz called a "grave error of judgment."

•    The House Urban Affairs Committee meets at 10 a.m. at the University of Texas at San Antonio. Lawmakers will hear invited testimony on how to address gaps in cities’ cybersecurity policy.

•    Gov. Greg Abbott will speak at noon at a downtown Austin luncheon celebrating the 25th anniversary of the Texas Court Appointed Special Advocates for Children (CASA). Abbott and first lady Cecilia Abbott will be honored as champions for Texas children.

•    Republican caucus-goers in Nevada will decide tonight who they want to be their candidate for president.

Taking a shot at Trump, Bill Clinton says at a Dallas college that America ‘never stopped being great,’ The Dallas Morning News

Ted Cruz tells O’Reilly he would round up and deport all 12 million, The Dallas Morning News

Fighting it out in HD-2, Houston Chronicle

“A lot of people looked at that really pretty picture that he painted of the future and they couldn’t find themselves. Our job is to put every American in that pretty picture.”

Battleground Texas is focused on the future, by Oscar Silva — Battleground Texas has never been about any single staffer or election — it's about building a volunteer organization to engage Texans all across our state.

•    Live Post-Primary TribCast on March 2 at the Austin Club

•    Protecting Houston Before the Next Big Storm on March 3 at San Jacinto College Maritime Technology and Training Center in La Porte.

•    A Conversation with Sid Miller, Texas Agriculture Commissioner on March 10 at the Austin Club

•    How High is the Water? A Data Visualization Party on March 13 at Umbel Corp

•    A Conversation with Reps. Craig Goldman, Stephanie Klick and Ramon Romero Jr. on March 29 at Texas Christian University in Fort Worth.

•    A Conversation with Sen. Carlos Uresti and Rep. Poncho Nevárez on April 13 at Sul Ross State University in Alpine