With a month to go before Election Day, challengers in 15 House races outraised incumbents during the most recent reporting period, according to the latest filings with the Texas Ethics Commission. In eight of those races, the challengers led in combined spending and saving, a rough measure of each campaign's financial strength.

Republicans in most statewide races are well ahead of their Democratic opponents on the financial front. In the governor's race, the candidates ended up in a virtual financial tie, with Rick Perry closing the financial gap that existed between him and Bill White at mid-year. Our updated interactive application lets you compare the numbers and includes links to the reports filed by the candidates.

The biggest fundraisers from July 1 to Sept. 23, not surprisingly, were Perry and White. The incumbent started behind, with $3.2 million less in his accounts than the challenger. He made up that ground and then some since July 1, raising $8.3 million to White's $4.7 million. Their spending patterns were different, with Perry ending the reporting period with $10 million in the bank, having spent $3.9 million, and White ending with $2.8 million on hand, having spent $11.2 million. 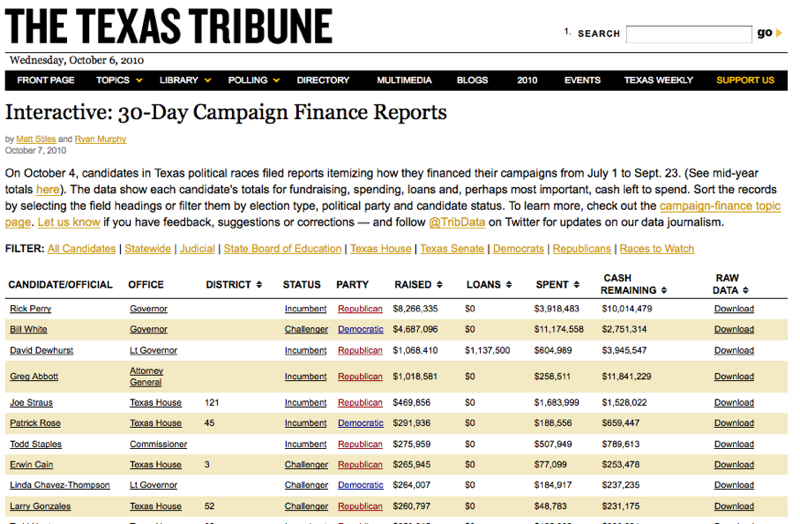 One way to estimate the financial strength of a campaign at this point is to combine spending so far during the general election cycle with cash still available. That puts Perry and White, for instance, on more or less equal footing, at $13.9 million each. That rough measure has caveats: White, for instance, was starting to advertise before the mid-year reports, and that spending isn't reflected, and the campaigns have been raising money at different clips, which could influence the finances they report to the state eight days before Election Day.

In the state's most competitive House races, challengers outraised incumbents in 15 contests, lagged behind them in 13 and came to virtual ties in three. Most of those challengers are Republicans, what with most of the swing seats in the Texas Legislature now in Democratic hands.

• The rankings of House candidates in fundraising during the three-month reporting period reveal more challengers than incumbents at the top. There's Cain, and then Larry Gonzales, who's after state Rep. Diana Maldonado, D-Round Rock, in HD-52; Kenneth Sheets, the challenger to state Rep. Allen Vaught, D-Dallas, in HD-107; Stefani Carter, who's after state Rep. Carol Kent, D-Dallas, in HD-102; and Jim Murphy, the former representative trying to win back his HD-133 seat from state Rep. Kristi Thibaut, D-Houston. Each raised $230,000 or more.

• The biggest borrowers on the list are state Rep. David Leibowitz, D-San Antonio, who had $1.6 million in outstanding campaign loans at the end of the reporting period, followed by Lt. Gov. David Dewhurst, at $1.1 million. Nobody else is in that league: Third on the list was state Rep. Van Taylor, R-Plano, whose campaign debts totaled $63,795.

• The biggest spender behind the gubernatorial candidates doesn't have a major party opponent next month, but he might have a race: House Speaker Joe Straus, R-San Antonio, spent $1.7 million, primarily on other legislators' races, during the three-month reporting period. If things go wrong for him in the elections next month, Straus could face a challenger for the speaker job when the Legislature convenes in January.