With one week of the Texas Legislature's 2017 regular session remaining, the House kicked into high gear over the weekend to pass several key items — including a version of the "bathroom bill" after facing pressure from Lt. Gov. Dan Patrick. Legislators also unveiled a deal to finalize the state's 2018-19 budget, and the Senate approved a controversial school finance bill. Here's what you need to know:

• The Texas House passed bathroom restrictions for transgender students. With Lt. Gov Dan Patrick threatening to hold bills hostage and force a special session over the House's lack of movement on the "bathroom bill," the lower chamber passed a measure that would keep transgender students from using school bathrooms in line with their gender identity. The last-minute vote amended a Senate bill focusing on school districts' emergency plans and added language requiring K-12 schools provide single-stall restrooms and other public areas to a student "who does not wish" to use facilities designated by "biological sex."

• The House moved other key measures. Representatives unanimously approved certain language from a property tax reform measure — another item Patrick deemed must-pass legislation — by attaching it as an amendment to another bill. It's unclear if Patrick and the upper chamber will approve the amendment, since it lacked a major provision that would require voter approval for some tax rate increases. And an amendment to extend the lives of several state agencies, known as the "sunset safety net," cleared the lower chamber after separate legislation that dealt with the issue died last week.

• Lawmakers announced a compromise budget. Amid a tight-fisted session, lawmakers agreed to pull around $1 billion from the state's savings account and to use another $2 billion using an accounting trick related to transportation funding approved in 2015. State Sen. Jane Nelson, R-Flower Mound, the Senate's top budget writer, called the compromise "responsible, compassionate and smart," and state Rep. John Zerwas, R-Richmond, Nelson's counterpart in the House, said it was "fiscally conservative" during "a time when it's a little bit more lean."

• The Senate put a voucher-like program in House Bill 21, the school finance bill. The upper chamber early Monday morning approved a bill that would simplify the formulas for funding public schools and allow parents of kids with disabilities to take state money to leave the public system for private schools or homeschooling. HB 21 now includes a provision the House hates and Patrick wants: state subsidies for parents who want to send their children with disabilities to private schools or need money for services to educate them at home.

• When U.S. Rep. Mike Conaway took over the House investigation into Russian interference of the 2016 election, his reputation for fairness preceded him.

• From Ross Ramsey: The Texas Legislature could easily slip into overtime, but it will only happen if they don't finish their work. And if it happens, it'll likely be on one particular official's terms.

• When The University of Texas denied this valedictorian, she got it to change its admissions rules.

• U.S. Rep. Al Green, D-Houston, released recordings of threatening voicemails he received after he called for the impeachment of President Trump.

• Texas moved one step closer to joining the large majority of states that consider sexual conduct between humans and animals a crime.

• A measure to let schools give meals to students without money in their accounts was revived as an amendment to another bill.

• Tom Mechler, chairman of the Republican Party of Texas since 2015, resigned from that post Saturday.

• A third time wasn't the charm for a state representative's school lunch legislation.

• The lower chamber passed a bill requiring students and police to learn how to interact with one another.

• The Sandra Bland Act was approved by the Texas House.

• A bill to ban texting while driving cleared the Texas Senate.

• A proposal to dramatically reshape the Texas Rainy Day Fund has effectively died in the final days of the legislative session.

• A state senator says he doesn't have enough votes to repeal or peel back the Top 10 Percent Rule for college admissions.

Trump to propose big cuts to safety-net in new budget, slashing Medicaid and opening door to other limits, The Washington Post ($)

How rollbacks at Scott Pruitt's E.P.A. are a boon to oil and gas, The New York Times ($) 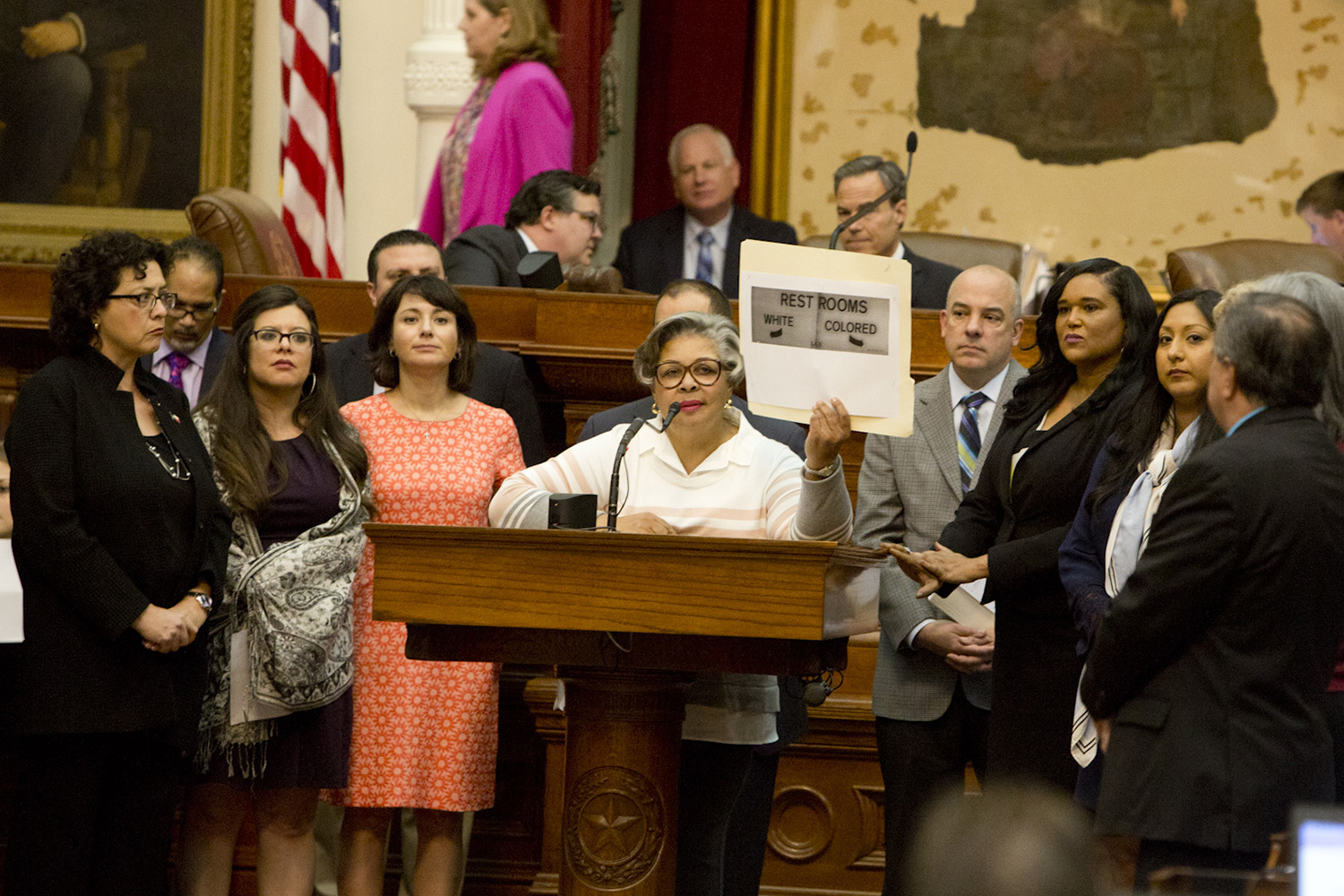 During a Sunday night debate on the "bathroom bill," state Rep. Senfronia Thompson, D-Houston, holds up a photo of a sign that reads, "RESTROOMS WHITE COLORED." Photo by Marjorie Kamys Cotera. See more photos on our Instagram account.

"Texas law now will be your strength and your sword and your shield. You will be shielded by any effort by any other government official in any other part of the state of Texas from having subpoenas to try to pry into what you’re doing here in your churches."