Before last week’s terrorist attacks in Beirut and Paris, Texas voters had illegal immigration and foreign terrorist groups at the top of their list of greatest threats to the U.S., according to the latest University of Texas/Texas Tribune Poll.

Given a list of possible threats to the country, 22 percent chose illegal immigration, followed by 18 percent who chose foreign terrorist groups such as ISIS and Al Qaeda. Other issues trailed behind, including political polarization, decaying infrastructure, gun violence and unfriendly foreign nations.

"Even before the terrorist attacks in Paris last Friday, Texans expressed deep concern over border security,” said Daron Shaw, co-director of the poll and a professor of government at the University of Texas at Austin. “I may be going out on a limb here, but I doubt Texas voters agree with Bernie Sanders' statement [in Saturday’s Democratic debate] that climate change represents a more urgent threat than jihadist terrorism."

Gov. Greg Abbott on Monday joined other state chief executives to say Texas would refuse to accept Syrian refugees for resettlement here. Jim Henson, co-director of the poll and head of the Texas Politics Project at UT-Austin, said there are clear policy reasons, as well as political reasons, for that kind of response.

“The initial responses we're seeing from both the Texas leadership as well as the field of presidential candidates reflect the partisan patterns in attitudes we saw in the poll prior to the Paris attacks,” he said.

“These approaches are very likely to resonate with the significant share of the Republican electorate that already have attitudes demonstrably hostile to present and future undocumented immigrants, as well as a smaller but still significant share of voters who view the threat of foreign terrorism as the most serious threat to the United States,” Henson said.

The list of most important problems facing the country was somewhat different in the poll, which, again, was conducted before the most recent attacks. Four items — the economy, political corruption/leadership, immigration, and federal spending/national debt — virtually tied for first on that list, each with about one in 10 voters choosing it as the top item. Only 6 percent listed national security/terrorism as the most important problem facing the U.S.

Immigration and border security continue to top the list of most important problems facing the state, according to Texas voters. Those two items together accounted for 35 percent of the responses. Other issues each were listed first by fewer than 10 percent of voters: political corruption/leadership, education, the economy and health care.

The state list has a distinct partisan tang: 57 percent of Republicans listed border security and immigration as the top problems facing Texas; 32 percent of independents said the same, as did 13 percent of Democrats. For that last group, the top two problems listed were political corruption/leadership and education. 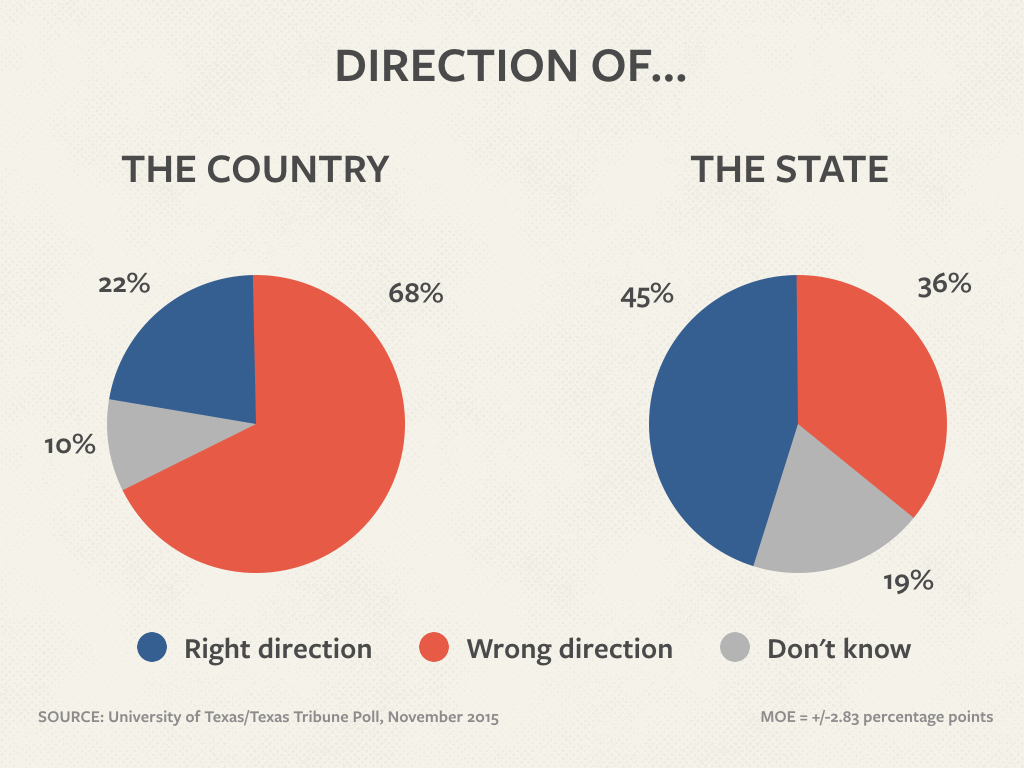 This is one of several stories on the latest University of Texas/Texas Tribune Poll. Thursday: The race for president. Friday: What Texas voters think about various state and federal officeholders and institutions. Monday: Guns, immigration, abortion and gay marriage.

Disclosure: The University of Texas at Austin is a corporate sponsor of The Texas Tribune.  A complete list of Tribune donors and sponsors can be viewed here.