U.S. Sen. Ted Cruz and businessman Donald Trump are in a dead heat for the Republican presidential nomination in Texas, according to the latest University of Texas/Texas Tribune Poll.

With four months to go before the March 1 primary, each had the support of 27 percent of likely Republican voters. Surgeon Ben Carson and U.S. Sen. Marco Rubio of Florida were well back of the leaders at 13 percent and 9 percent, respectively.

Former Secretary of State Hillary Clinton is the first choice of 61 percent of Texas Democrats, building on her earlier support in the state and remaining well ahead of her rivals, U.S. Sen. Bernie Sanders of Vermont and former Maryland Gov. Martin O’Malley. Sanders, running second, has been unable to change the fundamental dynamics of a primary where Clinton has the political advantage, as Barack Obama did in 2008. 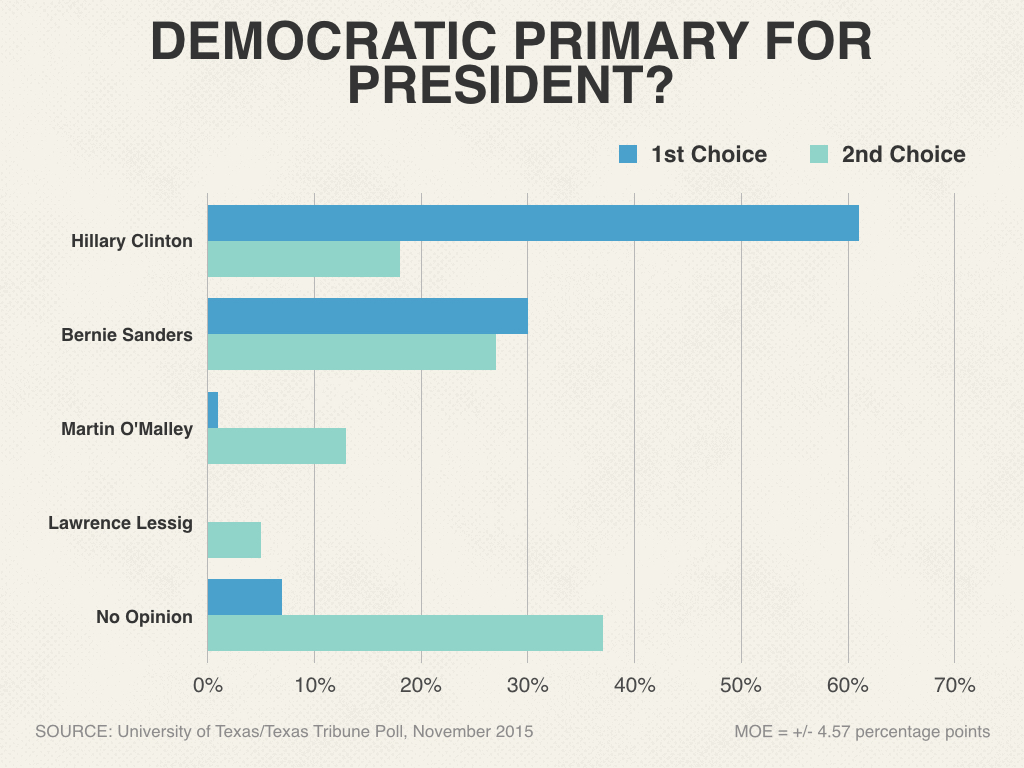 “I just don’t see any signs of weakness,” said Daron Shaw, co-director of the poll and a professor of government at the University of Texas at Austin.

Jeb Bush, the scion of the state’s best-known political family and a former governor of Florida, led the list of candidates that Republican voters said they would definitely not support: 25 percent of those voters said they wouldn’t vote for him. Bush was followed closely by U.S. Sen. Lindsey Graham of South Carolina, former New York Gov. George Pataki, New Jersey Gov. Chris Christie and former Virginia Gov. Jim Gilmore. 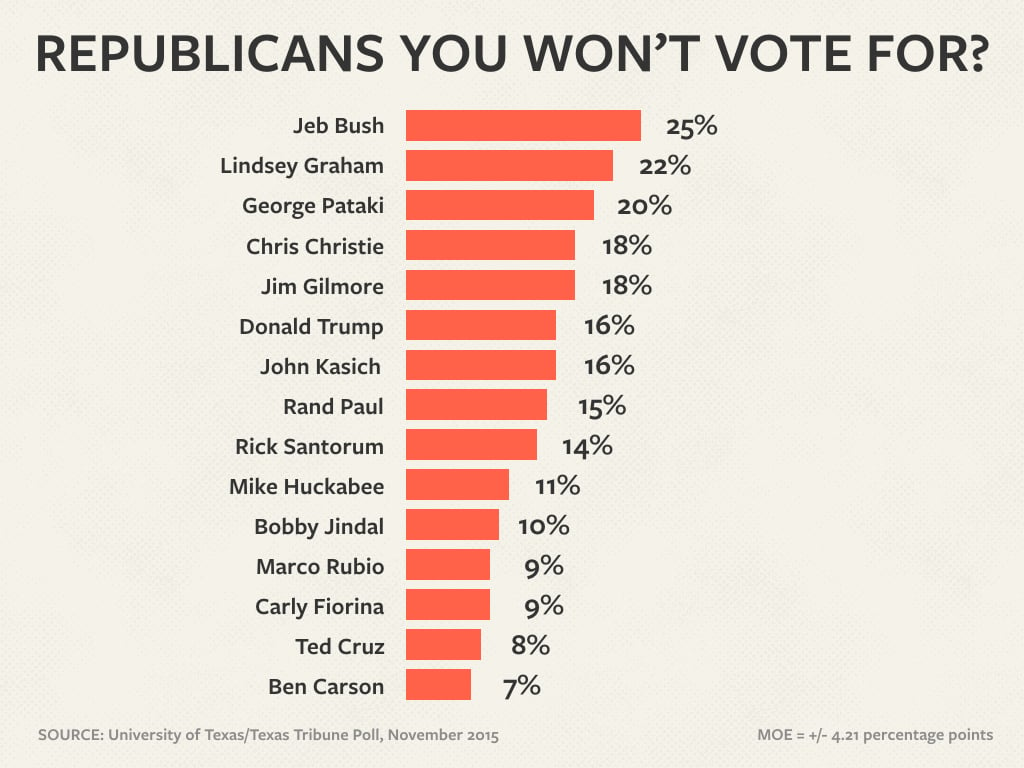 Trump was tied for sixth with Ohio Gov. John Kasich on that list of undesirables. Cruz was 14th; only Carson, at 7 percent, attracted a smaller number of “nevers” than Cruz.

“Bush is like old calendars — people are just not having it,” said Jim Henson, director of the Texas Politics Project at UT-Austin and the poll’s co-director. He noted that Bush was doing especially poorly with Republicans who identify with the Tea Party — the most active voters in the GOP. “This is the wrong time for Bush,” he said.

Democrats were more amenable to their candidates. Harvard University law professor Lawrence Lessig (6 percent), topped the list of candidates who Democratic voters said they would definitely not support.  O’Malley (4 percent), was last; the other two fell in between. 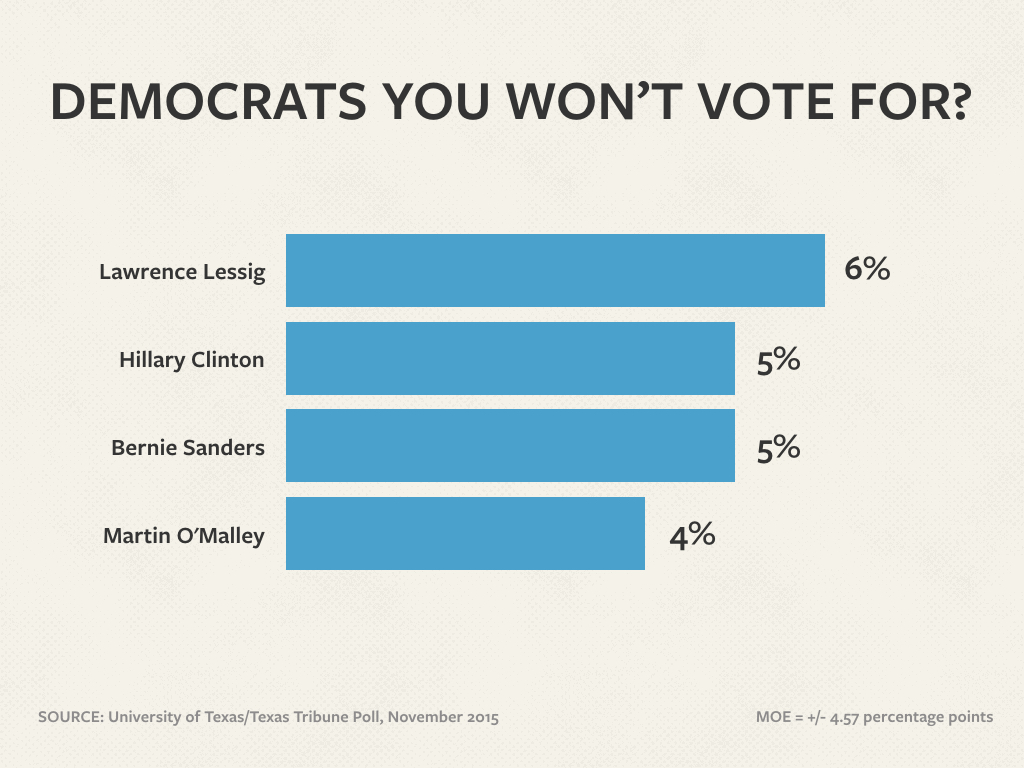 The numbers have shifted some since the previous UT/TT survey in June — a poll conducted when a number of official and unofficial exploratory campaigns were still underway.

Clinton led the Democratic field in the June UT/TT Poll with 53 percent support. Sanders’ numbers increased in the current poll, too, in part because two prospective candidates included in that survey — Vice President Joe Biden and U.S. Sen. Elizabeth Warren of Massachusetts — decided not to run.

The two leading Republican candidates in the latest survey — especially Trump — scooped up support that in June was going to two candidates who have since left the race: former Texas Gov. Rick Perry and Wisconsin Gov. Scott Walker. Cruz had 20 percent in that June poll; Trump was back in the dust at 2 percent.

“The summer of Trump had not started when we did the last poll,” Henson said. “He was not really in the race.”

Voters were also surveyed for their opinions of several officeholders, political figures and the political parties themselves.

“The idea that there is an insurgency in the GOP is not a metaphor — it’s a fact,” Henson said about those numbers. “Republicans have a big block of dissidents in their party.”

Overall, fewer voters feel strongly about Cornyn: 42 percent said they were either neutral or had no opinion. Only 20 percent checked that box when rating Cruz. 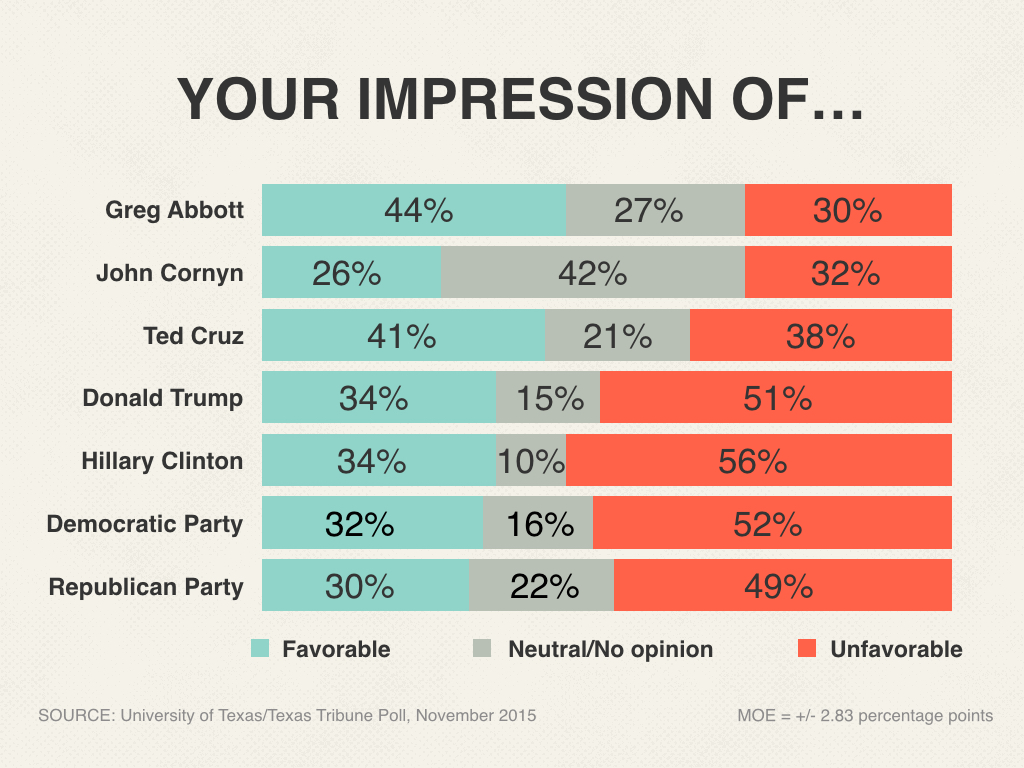 This is the first of several stories on the latest University of Texas/Texas Tribune Poll. Tomorrow: What Texas voters think about various state and federal officeholders and institutions.