Texas voters want their congressional representatives on short leashes, acting in line with voters’ wishes rather than their own beliefs, according to the latest University of Texas/Texas Tribune Poll.

Nearly two-thirds of voters said their members of Congress should act on the beliefs of their constituents rather than on their personal beliefs (12 percent) or those of their political parties (10 percent).

“There is a lack of faith in those representatives to represent people, and that kind of shows through in this,” said Jim Henson, co-director of the poll and head of the Texas Politics Project at the University of Texas at Austin. 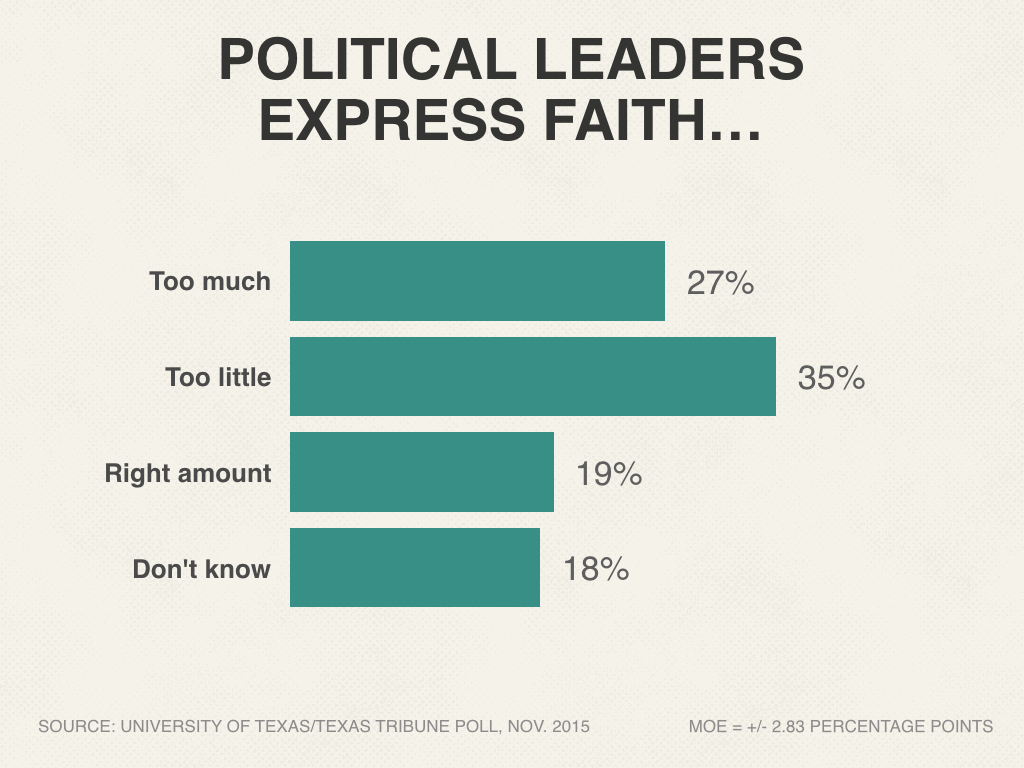 “They’ve moved away from the idea that representatives are supposed to bring home the pork,” said Daron Shaw, a government professor at UT-Austin and co-director of the poll.

Political leaders do not express their religious faith enough, according to 35 percent of Texas voters. Another 27 percent say leaders invoke faith too much, and 19 percent say those leaders have it about right. Conservatives were more likely to say too little (51 percent), liberals were more likely to say too much (65 percent) and self-described moderates were about evenly split.

“The thing I notice most is the funny disjuncture between people thinking their representatives should be looking out for the country as a whole but should be guided by ‘people like me,’” Henson said.

The state’s voters are not over their strong disapproval of Congress: Only 10 percent say Congress is doing a good job, and only 2 percent “approve strongly” of the job it’s doing. Meanwhile, 71 percent said they don’t approve, including 46 percent who strongly disapprove.

In that light, President Barack Obama’s numbers almost look good. But while 36 percent of Texas voters approve of the job the president is doing, 54 percent disapprove. That last number includes 46 percent who strongly disapprove.

The state’s U.S. senators get much higher ratings than Congress as a whole. While 38 percent express no opinion of John Cornyn’s work, 27 percent approve and 34 percent disapprove. Ted Cruz gets good marks from 44 percent, bad marks from 37 percent and 20 percent registered no opinion.

“For people who do in some way want to blow up the system, Ted Cruz is the champion,” Shaw said.

Voters’ level of trust is about evenly split between the legislative and executive branches of the federal government; each was the choice of 18 percent. A bigger number, 24 percent, said they most trust the judiciary. And 40 percent didn’t pick a favorite. 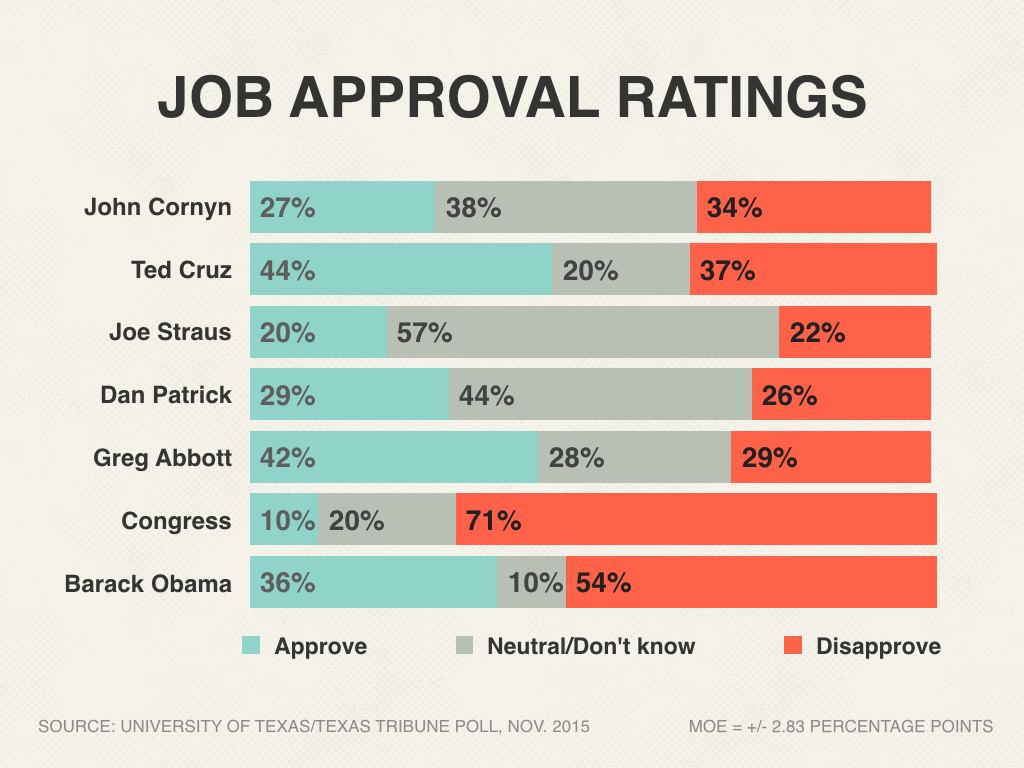 The state’s top legislative leaders are more likely than the governor not to register at all with voters. Lt. Gov. Dan Patrick won approvals from 29 percent, disapprovals from 26 percent, and 44 percent said either that they had no opinion or that they didn’t rate Patrick positively or negatively.

House Speaker Joe Straus’ work has the approval of 20 percent and disapproval from 22 percent. Most — 57 percent — remained neutral.

“Republicans and conservatives, by and large, seem to be pretty happy with the jobs done by the leaders of the Legislature,” Henson said.

He said the political challenges to the speaker from others in the GOP at the state Capitol aren’t reflected in the polling of rank-and-file Republican voters.

“For somebody that has been consistently seen as insufficiently Republican by dissident Republican elites, Joe Straus is doing very well with both Republicans and Tea Party voters,” Henson said. “He is still very much in positive territory — his negatives [in the electorate] come from Democrats.”

Ask voters whether they will turn out for the Republican or Democratic primary, and 50 percent choose the first while 35 percent choose the second. But ask how they would vote if the Tea Party had its own candidate for Congress and the numbers change: 22 percent Republican, 33 percent Democrat and 17 percent Tea. The number of uncommitted voters rises, too, when the Tea Party is included, to 26 percent from 15 percent. 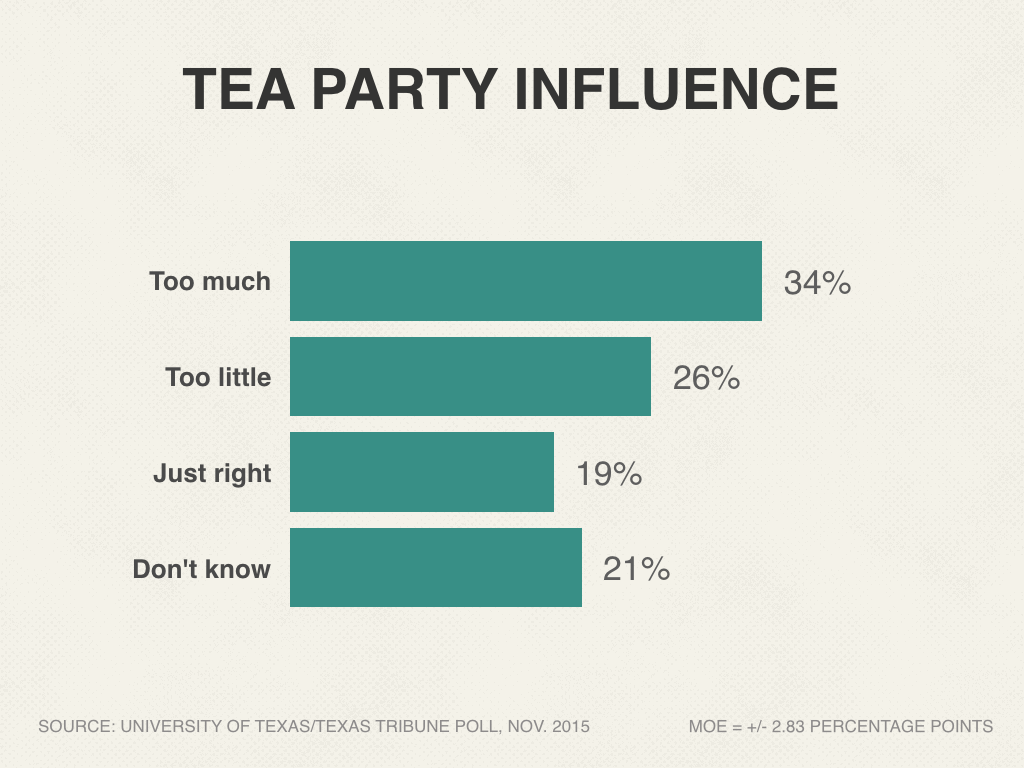 It’s a big part of the modern GOP in the state, Shaw said.

“If you’re running in a Texas Republican primary, 43 to 44 percent of the voters are Tea Party Republicans,” he said. “You have to talk to those people — you can’t just write them off.”

This is one of several stories on the latest University of Texas/Texas Tribune Poll. Yesterday: The race for president. Monday: Texans’ views on immigration, guns and social issues.