Texas voters are split on whether gays and lesbians should be allowed to marry and on whether businesses should be required to provide services to them, according to the latest University of Texas/Texas Tribune Poll.

Ahead of an impending U.S. Supreme Court decision on legal challenges to same-sex marriage bans, Texas voters — by a narrow margin — said gay and lesbian couples should be allowed to wed. But neither side of the question drew a majority of the support, and 14 percent said they don’t know which way the court should rule.

“Attitudes probably are changing in Texas, but they’re changing slowly,” said Jim Henson, co-director of the poll and head of the Texas Politics Project at the University of Texas at Austin. “Opinion among Republicans is changing more slowly than it is in the rest of the country. There is a gender gap. There is an urban-suburban-rural difference. But age is the big one.”

The overall numbers hide ideological, religious and other differences. Democrats favor gay marriage by a 3-to-1 margin; 25 percent of Republicans agree with them, while 60 percent oppose such unions.

Women favor it 50 percent to 36 percent; among men, 38 percent approve of gay marriage while 47 percent oppose it.

And to Henson’s point, the older Texans are, on average, the more opposed they are to gay marriage. While 66 percent of voters between the ages of 18 and 29 favor it, only 27 percent of those older than 64 approve.

“Religion and age, that’s huge,” said Daron Shaw, who teaches government at UT-Austin and co-directs the poll. “Republicans are kind of out on the island. I think it’s more party than age. Look at the gender numbers — that’s a gender gap way beyond party. 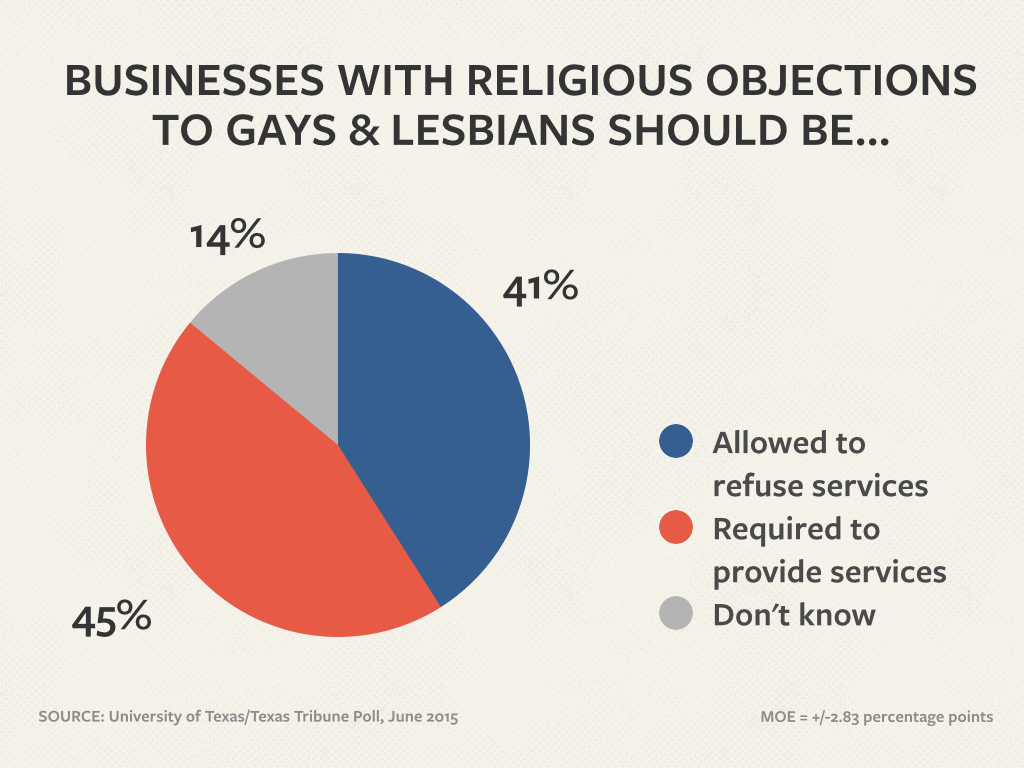 “We find comparable defection from party position on both sides,” Shaw added. “My guess is that it’s older male Democrats breaking and younger female Republicans who break.”

Similar fractures appear on the business services question, but some of the numbers stand out. For instance, while black voters are split 38 percent to 39 percent on the gay marriage question, 56 percent strongly favor requiring businesses to provide services to gays and lesbians and only 20 percent say businesses should be allowed to refuse service.

“When you put ‘allowed to refuse service’ in there and it looks like discrimination, you’re going to get that kind of movement among blacks and Hispanics,” Henson said. “It looks like a refusal of accommodation of a public service. When you provide for freedom of religion, you set off alarms for some Republicans. Different groups are reacting differently to different cues.”

Shaw, who has advised Republican candidates, said the numbers aren’t clear enough to reverse candidate positions in political races — not yet, anyway. “It depends on whether you’re talking about a primary or a general election, with a Republican candidate,” he said. “You run the risk of being primaried; there is a huge older slant in relation to primary elections. In a statewide election, it’s still slightly troublesome. Younger and female voters are already there. I wouldn’t be out on the vanguard, but check back in 2020.”

The maximum penalty for possession of small amounts of marijuana in Texas is stiff: 180 days in jail and a $2,000 fine. More than two-thirds of Texans would support lowering that penalty to a citation and a $250 fine, the poll found. Only 26 percent said they would oppose lowering the penalty, including 15 percent who “strongly oppose” the proposal. 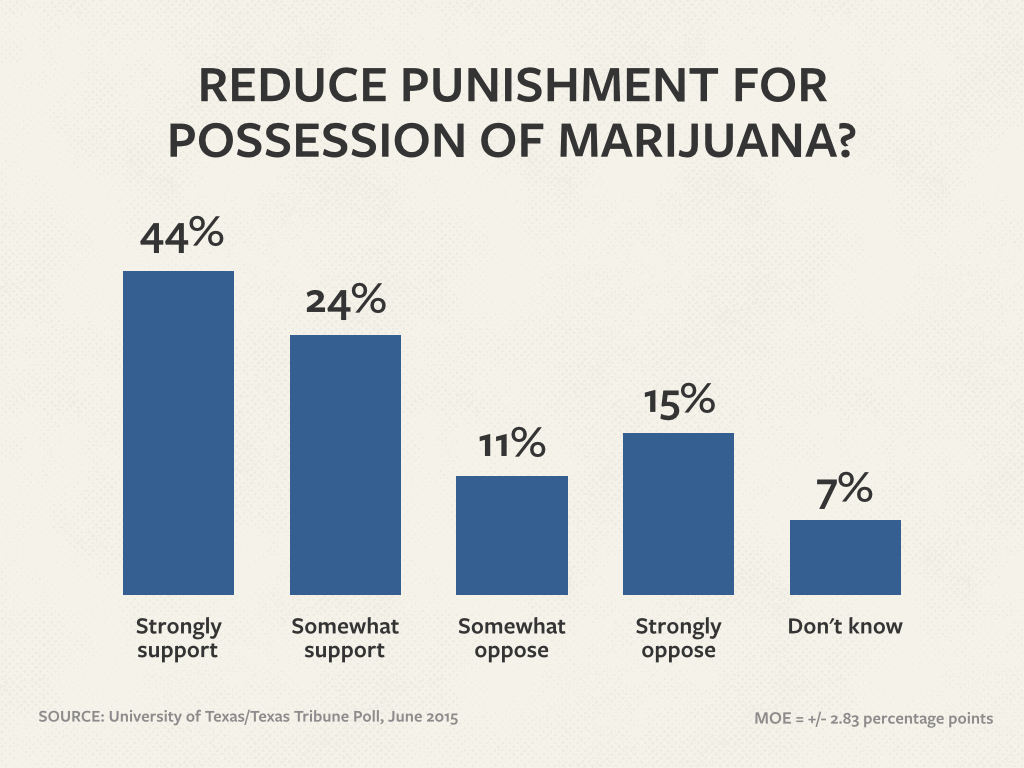 Unlike their hidden divisions on other policy questions, the support for lower penalties for possession was strong across all of the subgroups in the survey.

“This one is obvious,” Shaw said. “If you took a real pro-law-and-order stance 10 years ago, you have to go through some sort of conversion.” Support was uniform, in his words, “from hippy-dippy liberals to the Tea Party.”

The Texas Legislature left in place a policy that allows undocumented immigrants to pay in-state tuition at state colleges and universities if those kids graduate from Texas high schools, live in the state for three years and apply for citizenship. And Texas voters are divided on that, with 41 percent in favor of the policy and 43 percent against it.

What started as a bipartisan idea in the Legislature more than a decade ago is now appealing to 61 percent of Democrats and only 26 percent of Republicans, the poll found.

“In-state tuition, like the numbers on gay marriage, is hard for lawmakers to do something about because they get a lot of resistance,” Henson said. “There’s a lot of ‘no opinion’ on this among Republicans.”

The Legislature’s decision to tighten laws around parental consent for abortions appears to be in line with voter attitudes. Half of the state’s voters — and 62 percent of its Republican voters — support making it more difficult for minors seeking abortions to go to judges to bypass the parental consent requirements. Half of the Democratic voters oppose the restrictions, as do voters who identify themselves as “pro-choice,” but most other subgroups were in favor of them.

This is one of several stories on the latest University of Texas/Texas Tribune Poll. Previously: The presidential primaries, guns and discrimination, and the mood of the state. Tomorrow: Federal interventions, taxes and other legislative issues.