Walker was running neck-and-neck with Cruz in February, when his entry into the race was making daily news, but the Texans’ home-field advantage is showing again. Cruz had the support of 20 percent of registered voters, followed by Perry at 12 percent, Walker at 10 percent, U.S. Sen. Marco Rubio of Florida at 8 percent and former Florida Gov. Jeb Bush at 7 percent.

Poll co-director Daron Shaw, a professor of government at the University of Texas at Austin, said the results reflect a “native son effect” in Texas that boosts the performance of candidates who are from here in comparison with their showings in national polls.

“I was just sort of assuming that Texas was a microcosm of national politics, but that turns out not to be the case,” he said.

And although Cruz has the lead, it’s not a commanding one. Three more candidates — author and retired neurosurgeon Ben Carson, U.S. Sen. Rand Paul of Kentucky and former Arkansas Gov. Mike Huckabee — each were the choice of more than 5 percent of those who said they would vote in the GOP primary. Eight others had the support of 3 percent or less: former business executive Carly Fiorina, former U.S. Sen. Rick Santorum of Pennsylvania, developer and celebrity Donald Trump, New Jersey Gov. Chris Christie, Louisiana Gov. Bobby Jindal, Ohio Gov. John Kasich, U.S. Sen. Lindsey Graham of South Carolina and former New York Gov. George Pataki. Nearly one in six voters said they have not decided which candidate to support. 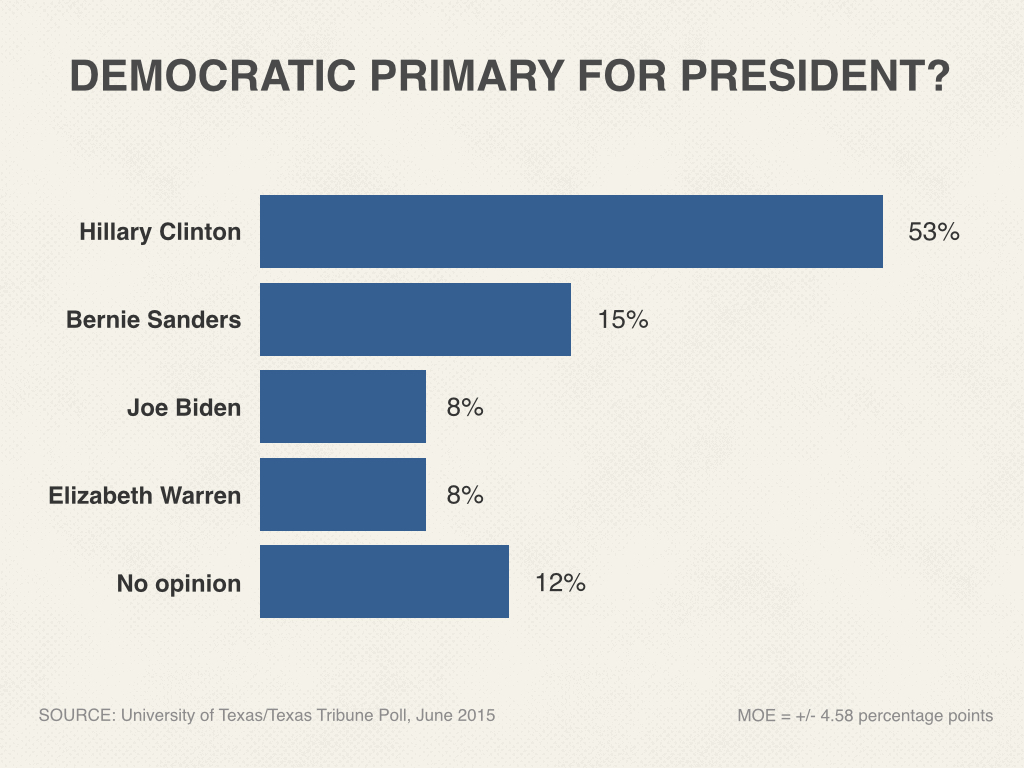 “There is clearly a top tier here in Texas. There is a clear front-runner here, but not a winner,” Jim Henson, co-director of the poll and head of the Texas Politics Project at UT-Austin, said of the candidates seeking the GOP nomination. “If you’re Ted Cruz, even if you get clobbered in Iowa, New Hampshire and South Carolina, you have no incentive to get out, because of the early Texas primary.”

A candidate could lose in those early states and still recover with a good performance here and in other March primaries, he said.

Cruz led the Republican pack among the Tea Party folk, with 35 percent to Walker’s 16 percent; no one else had more than 8 percent. Among the non-Tea Party Republicans, Perry was the favorite of 17 percent, followed by Cruz at 14 percent, Bush at 11 percent and Rubio at 8 percent. Nobody else got more than 6 percent.

The picture is much clearer in the Democratic primary, where Hillary Clinton, the former secretary of state, U.S. senator and first lady, had the support of 53 percent of registered voters planning to vote in the Democratic primary next year. U.S. Sen. Bernie Sanders of Vermont was next, at 15 percent, followed by Vice President Joe Biden and U.S. Sen. Elizabeth Warren of Massachusetts, with 8 percent.

“Hillary Clinton is still an almost prohibitive favorite, but with Bernie Sanders and Joe Biden in the news for different reasons and with the primaries getting closer, we see a little bit of movement,” Henson said. “I wouldn’t say it’s anything for Clinton to worry about.” 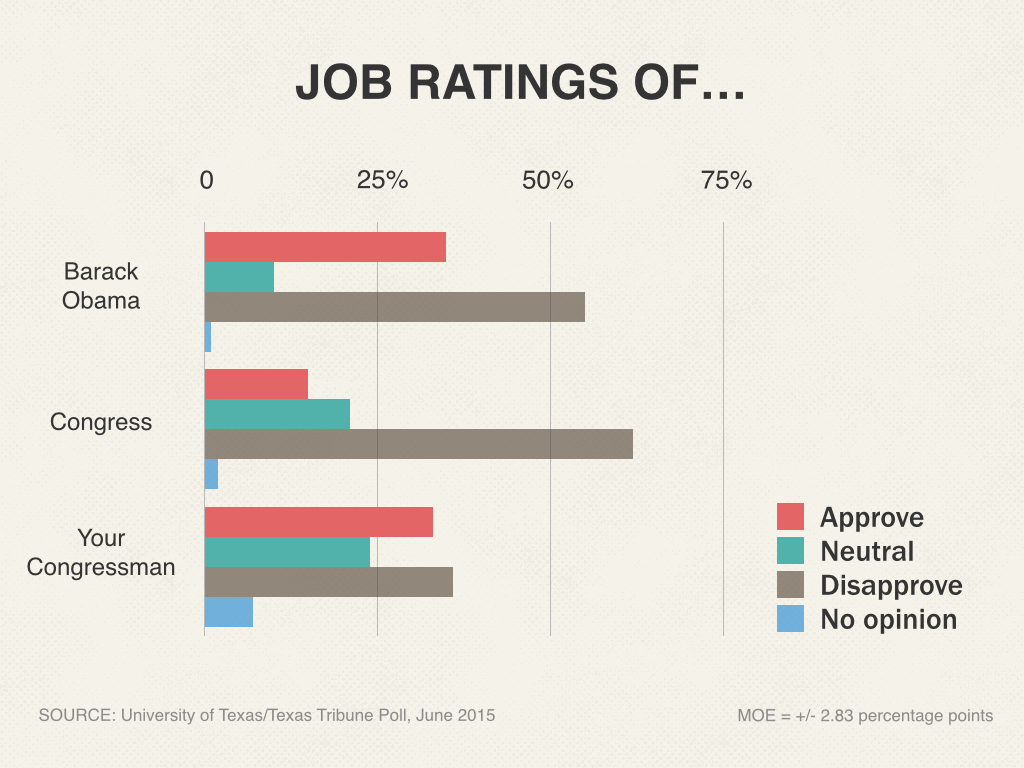 When voters were asked who their second choice in the Democratic primary would be should their first choice stumble, Biden led the pack with 25 percent. Warren was next at 20 percent, followed by Clinton at 17 percent and Sanders at 11 percent. 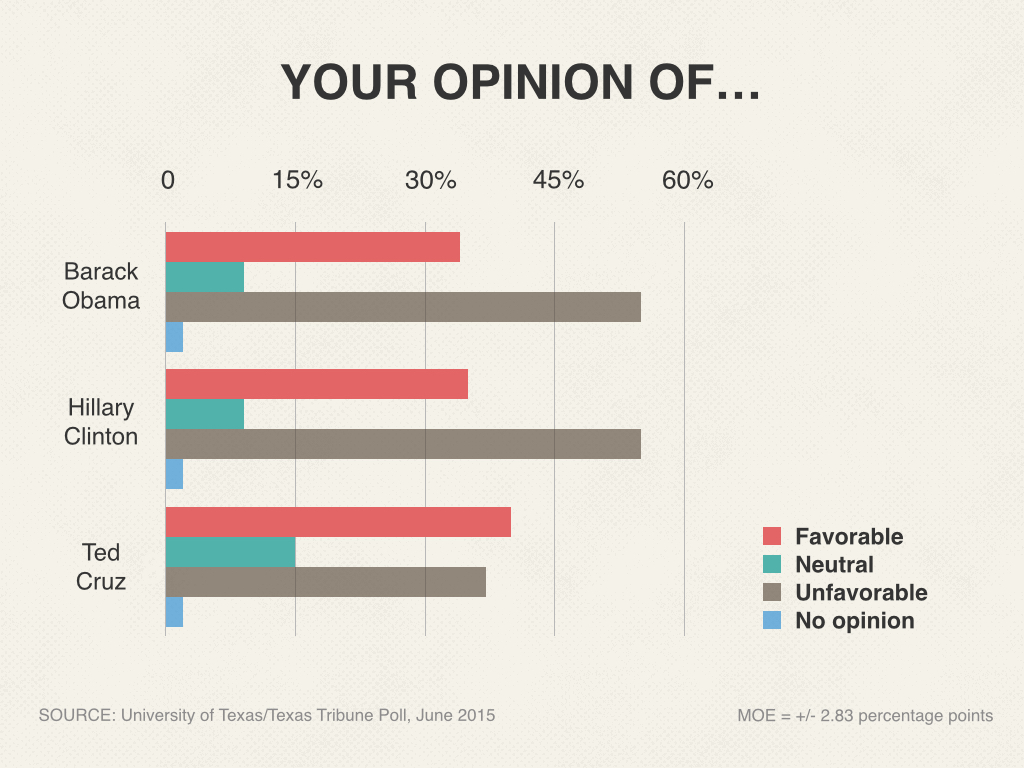 This is the first of several stories on the latest University of Texas/Texas Tribune Poll. Tomorrow: Guns, discrimination and the mood of the state.