Support for criminal and mental health background checks on gun purchases is overwhelming in Texas, but voters are split when it comes to carrying concealed weapons on college campuses, according to the latest University of Texas/Texas Tribune Poll.

Nearly three-quarters of Texas voters said they would support background checks on all gun purchases in the U.S., including at gun shows and for private sales. A solid majority of 57 percent strongly supports such checks. Of the 24 percent who oppose the checks, 14 percent strongly oppose them. And just about everyone has an opinion — a scant 3 percent said they don’t have an opinion.

Allowing faculty, staff and students to carry concealed handguns on college campuses is supported by 46 percent of Texas voters and opposed by 48 percent. The most strongly held opinions are on the negative side, with 34 percent strongly opposing campus carry and 26 percent strongly supporting it. 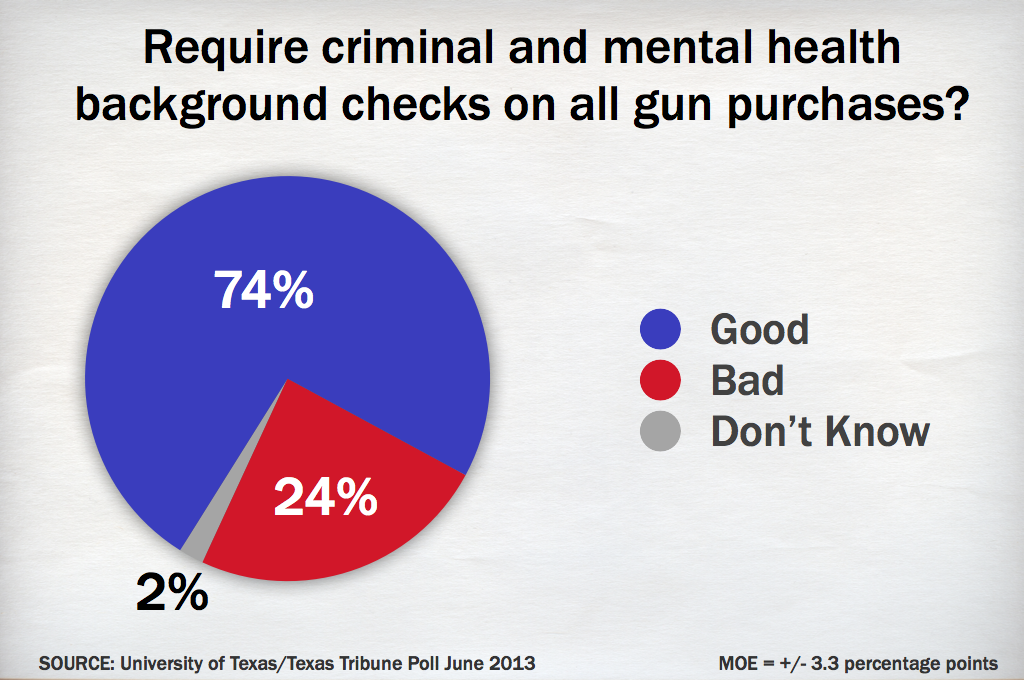 “While we have a strong amount of support overall, we saw Republican support for background checks drop and opposition increase, which is almost certainly attributable to the partisan framing of the issue,” said Jim Henson, co-director of the UT/TT Poll and head of the Texas Politics Project at UT-Austin. 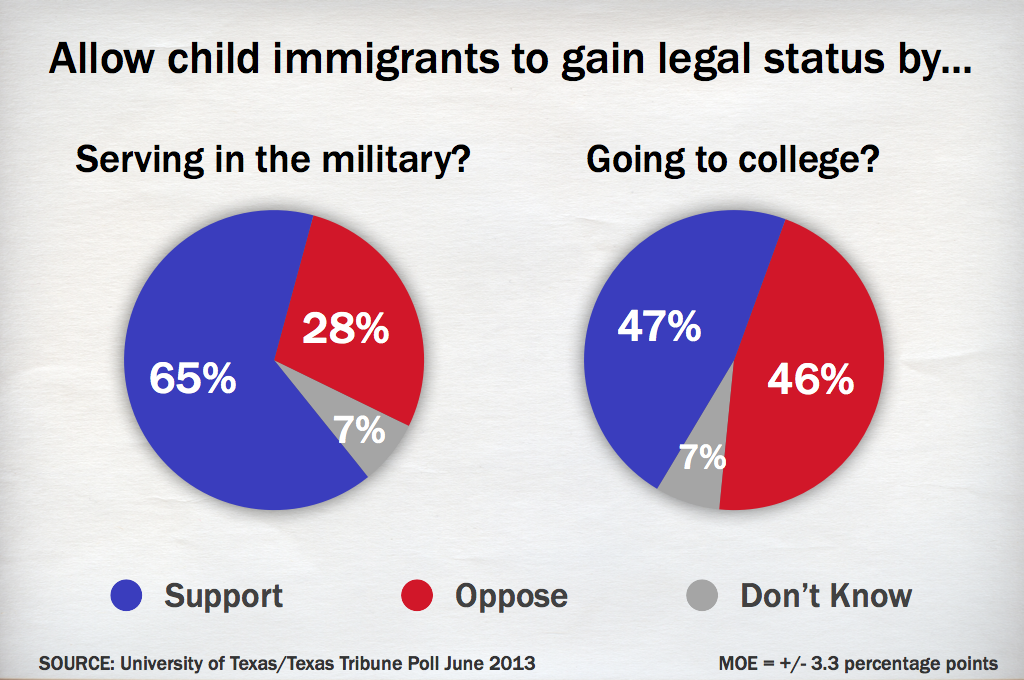 A plurality of Texas voters — not quite a majority — said immigration is, on the whole, a good thing for the country. And they would be willing to grant legal status to children illegally in the U.S. in return for military service; 65 percent support that notion. Less than half — 47 percent — would be willing to convey legal status to illegal immigrants brought to the U.S. children for going to college.

Almost half of Texas voters said they would support a pathway to citizenship for most illegal immigrants living in the U.S. now, but 41 percent oppose that policy, including 29 percent who strongly oppose it.

“You basically have just under 30 percent who don’t care if you’re a superhero,” said poll co-director Daron Shaw, a professor of government at UT-Austin. “They don’t like any of that.” 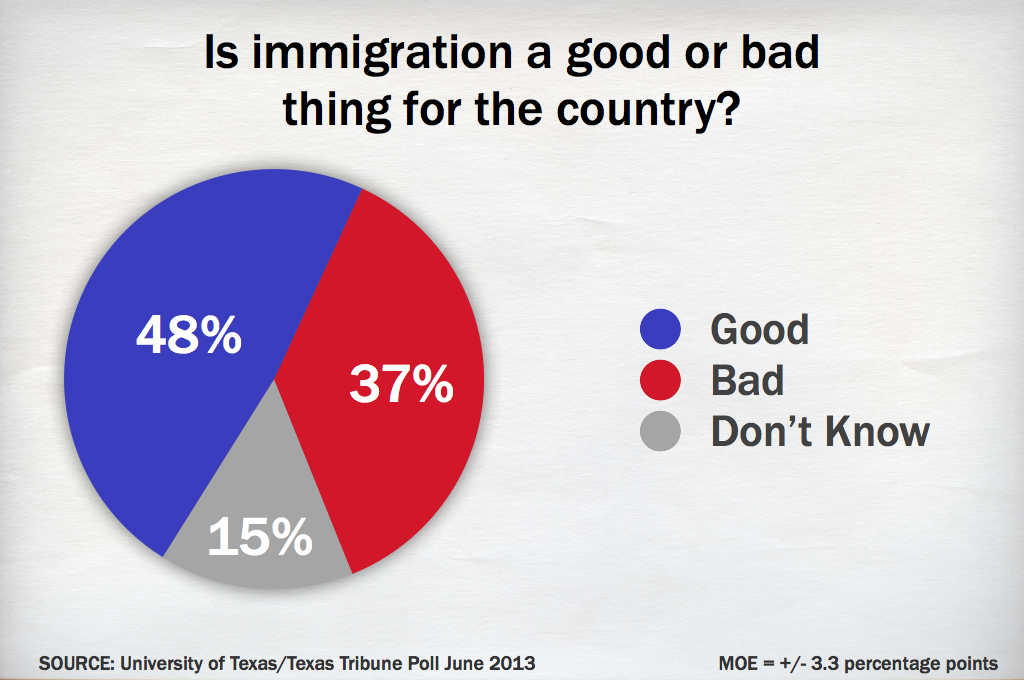 “Issues that are very divisive, they look more closely divided when you break them down a little bit, you see some partisan structure in them,” Henson said. “Republicans are much more skeptical, which tells us a little about the fight in the party.”

How far can a Republican stray from conservative voters’ antipathy to pathways to citizenship? “That seems to be the logic that is driving some of our most ambitious politicians in the Republican Party right now,” he said.

Collecting a public pension and a state paycheck at the same time is a no-no with 75 percent of Texans, who support a ban on that policy. That includes 60 percent who strongly support a ban. Gov. Rick Perry is the most prominent example of someone who does that; he revealed, in financial filings during his presidential run, that he is collecting his state pension even though there has never been a break in his state salary. Only 16 percent of Texans would oppose a prohibition.

“No big surprises there,” Henson said. “If you ask people what they think about public officials, they expect them to be open, and they don’t like the idea, particularly, of double-dipping by public officials.”

Political redistricting — a debate going on right now in the Texas Legislature’s special session — ought to be taken from lawmakers and instead given to an independent, appointed commission, according to 43 percent of Texas voters. Another 28 percent oppose it, and a large group — also 28 percent — said they didn’t know which alternative they’d prefer.

“Everybody likes the idea of making it nonpartisan, but you can’t do that — the connection between partisanship and demography is just too great,” Shaw said. “There’s no empirical evidence that it produces better maps. There is, however, public confidence to consider. I think people have a vague notion that when the Legislature does it, it’s too political.”

This is the last of five stories on the latest University of Texas/Texas Tribune Poll. Monday: head-to-head races for president, governor and lieutenant governor. Tuesday: what voters think of top political figures and institutions. Wednesday: voters’ take on the most important issues and the economic climate. Thursday: issues and the Texas Legislature.