Texas voters remain split on the permissibility of abortion but favor banning the procedure after 20 weeks of a pregnancy, according to the latest University of Texas/Texas Tribune Poll.

The survey also found a divergence of opinion about public schools: Voters with school-age children give schools much better ratings than all voters as a group.

The divide on abortion — evident in past UT/TT polls — persists. Forty-six percent of Texas voters say it should never be permitted or permitted only in cases involving incest, rape or when the woman's life is in danger. On the other hand, 49 percent say it should be allowed after the need for an abortion has been clearly established, or that the choice should be completely left to the woman. Within those numbers, 16 percent said abortion should never be allowed, and 36 percent said that a woman should always be able to get an abortion as a matter of personal choice. 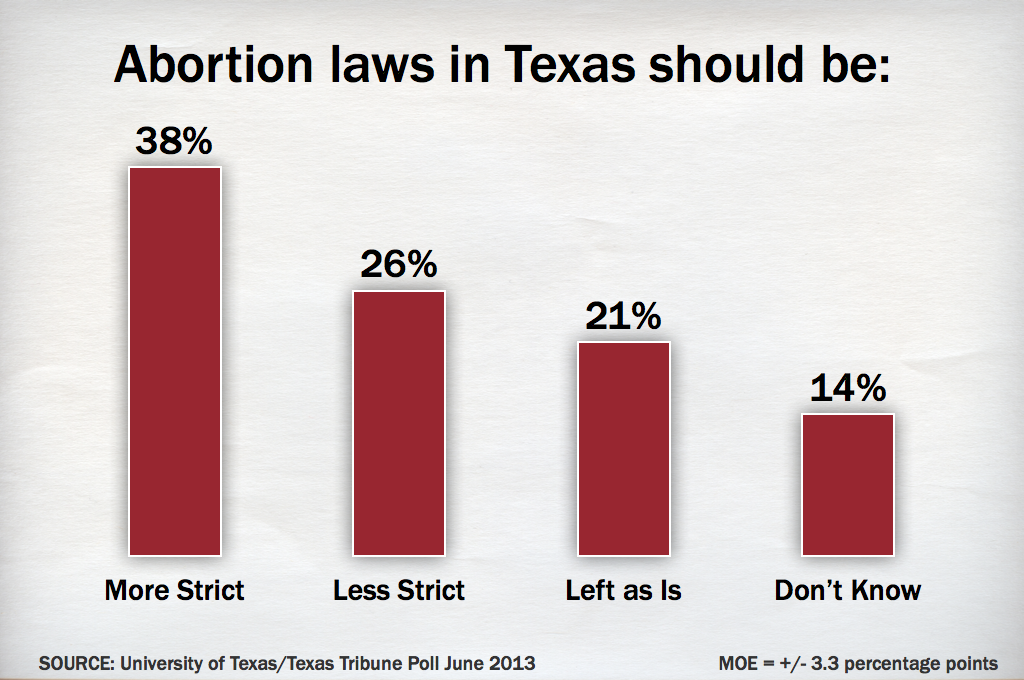 “What you see is what you would expect in a relatively red state,” said poll co-director Daron Shaw, a professor of government at the University of Texas at Austin. “It’s a slight pro-life lean. It’s probably pushed a little bit because of the question about late-term abortions.”

“In terms of substantive policy, most of this is not particularly right-wing,” Shaw said. “Maybe the abortion stuff. These are abortion positions that are actually not strongly opposed — there is a 2-to-1 preference for that.” 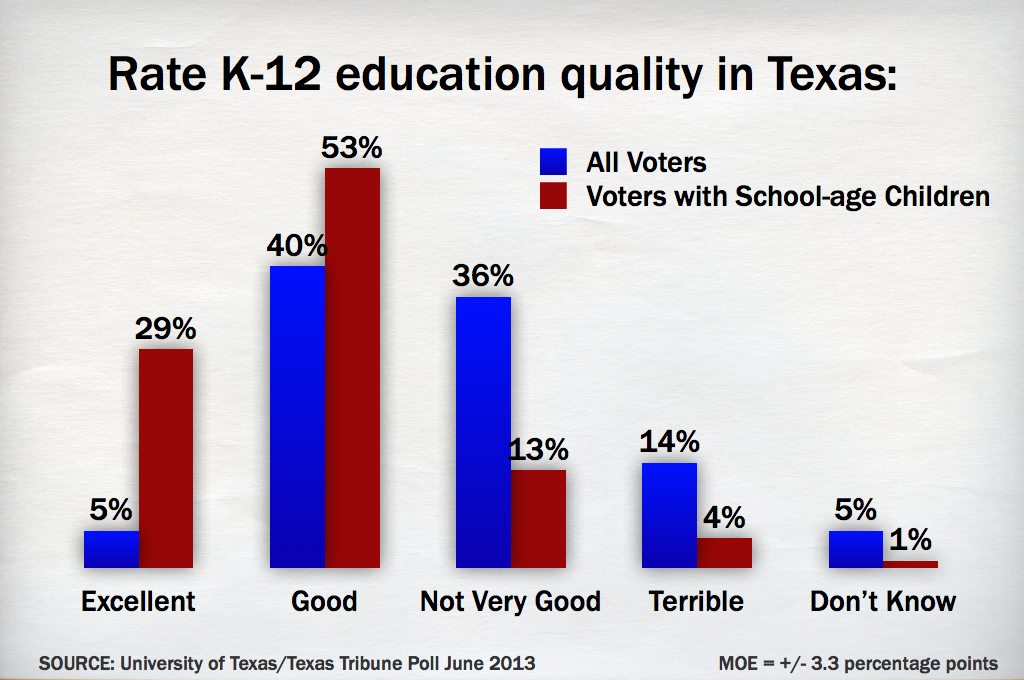 When asked about the public schools, 45 percent of voters give K-12 education ratings of excellent or good. Voters with children currently enrolled in school were much more positive, with 82 percent giving their own children's schools excellent or good ratings. About the same numbers — 14 percent of all voters and 13 percent of those with kids in school — gave public education (or their own children's schools) a “terrible” rating.

“It’s not unlike what you see with other institutions, like with Congress,” said Jim Henson, who runs the Texas Politics Project at UT-Austin and co-directs the UT/TT Poll. “In the way that voters tend to like their members of Congress and elect them over and over again and then turn around and say they disapprove of Congress, people tend to see flaws in the education system overall, but they know their teachers, they like them, they’re taking care of their kids.”

Many candidates in 2012 heard from voters about tests required for high school graduation, and lawmakers decided to cut the number of those exams to five from 15. That move has the support of 60 percent of voters, including strong support from 35 percent. Nearly a third of voters opposed cutting the number high-stakes tests. 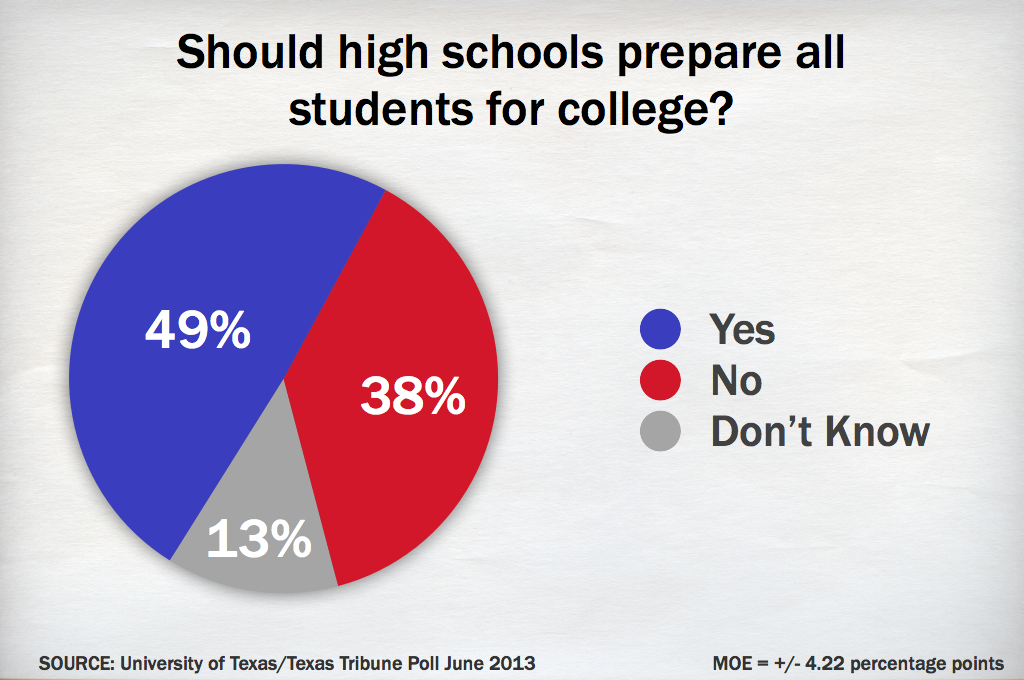 During the regular session of the Legislature, lawmakers tinkered with high school curriculum and graduation requirements to take professional training for non-college-bound students into account. Nearly half of Texas voters said schools should set requirements to encourage all students to go to college, while 38 percent said the schools shouldn’t do that.

“That 38 percent are the people who think that public education isn’t geared strictly to get people into college, that there are other paths and that the schools ought to facilitate that,” Shaw said.

With most of the state in the midst of a record-setting drought, lawmakers put together a $2 billion water plan that will be presented to voters in November as a constitutional amendment. That money would come from the state’s Rainy Day Fund, an idea supported by 68 percent of the voters, and opposed by only 20 percent.

“This is one of the areas where we were eager to see if the flare-up of fiscal conservatives to funding the water from the Rainy Day Fund was going to register in public opinion,” Henson said. “There’s no evidence of that. That could have implications going into a fall constitutional amendment election.

“As it stands now, you have an uphill battle to beat the amendment,” he said.

This is the fourth of five stories on the latest University of Texas/Texas Tribune Poll. Monday: head-to-head races for president, governor and lieutenant governor. Tuesday: what voters think of top political figures and institutions. Wednesday: voters’ take on the most important issues and the economic climate. Tomorrow: immigration and other policy questions.