“The Legislature has water on the brain, so to speak, but it doesn’t seem that the public is following,” said Jim Henson, co-director of the poll and head of the Texas Politics Project at the University of Texas at Austin. “If you look at the most important problems facing Texas, water still doesn’t move the needle. But if you ask if water is important, nobody will say it’s not important.”

How should the state pay for water projects? Lawmakers are talking about taking $2 billion from the state’s Rainy Day Fund to get projects started and have discussed continuing sources of funding. A quarter of the voters would fund projects with a one-time expenditure to create a fund, while 39 percent would do it with a surcharge based on the amount of water used by individuals and businesses. Another 15 percent prefer a tap fee on water bills, and 21 percent didn’t register an opinion.

“The top choice gets to this notion of fairness — that you pay based on how much you use,” said Daron Shaw, poll co-director and a professor of government at UT-Austin. “People read that as properly expanding the tax base.” 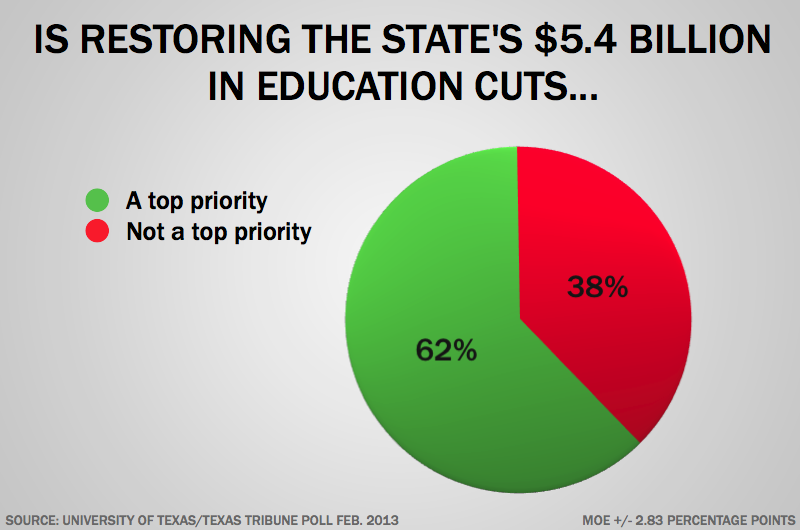 Voter opinion is divided over the budget cuts made by Texas lawmakers in 2011, with 30 percent saying the cuts made to education and health and human services should be restored, and 32 percent saying the Legislature’s top priority should be continuing to limit government with no new spending and no new taxes, according to the poll. Smaller groups said lowering taxes should be the top priority and spending on infrastructure should come first.

“The public is seeing the budget through a partisan lens,” Henson said. “School spending is dividing Democrats more than it is Republicans. The argument that Republican advocates make has more resonance with Republicans than the alternative argument has with Democrats.”

When asked specifically about education, voters leaned strongly toward spending, with 62 percent saying they prefer “the top priority of the Legislature in the 2013 session should be to restore that funding, especially given a better budget outlook for 2013-2014.” The alternative — “public education funding is already quite good compared with other large states, restoring the budget cuts should not be a top priority” — was preferred by 38 percent.

The former position was strongly favored by 90 percent of self-identified Democrats and 57 percent of independents, while 61 percent of Republicans favored the alternative. 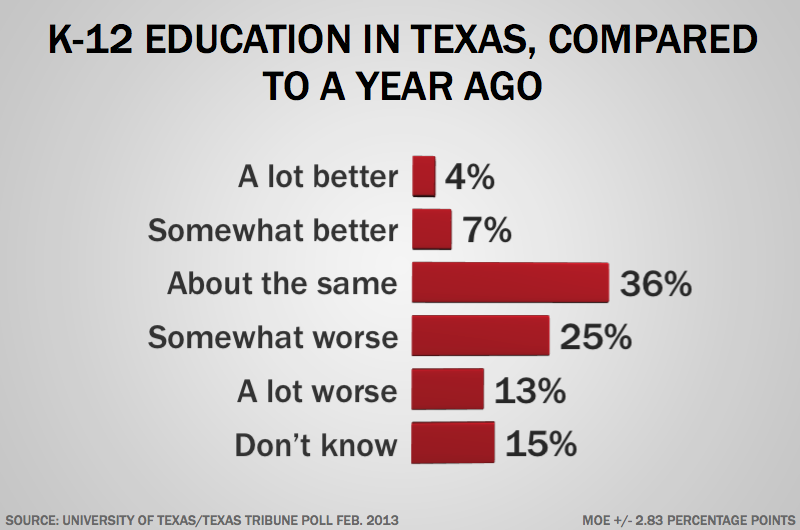 Public education is worse than it was a year ago, according to 38 percent of Texas voters. About as many — 36 percent — said it’s about the same, and only 11 percent said the quality of K-12 education is better than it was 12 months ago. Democrats were more likely than Republicans to say the quality of public education has fallen over the last year, and Republicans were more likely to say it’s about the same now as then.

Most Texans — 63 percent — agreed with this statement: “Government-funded school voucher or scholarship programs give parents the opportunity to remove children from failing schools and allow for greater choice.” The rest preferred this statement over the other: “Government-funded school voucher or scholarship programs remove state funds from the schools that need them most and don’t solve systemic problems with the education system.”

Republicans and independents were much more likely to choose the first statement over the second, while the majority of Democrats chose the second. Shaw suggested results like that show policymakers how to make their sales pitch to voters.

“You need to drive the agenda,” he said. “You need to control framing. Democrats nationally have been able to control the framing of [public education funding] issues. How you ask the question has a huge impact on how it goes.”

“The problems there just haven’t sunk in with the public,” Henson said.

This is the four of five days of stories on the latest University of Texas/Texas Tribune Poll. Yesterday: The mood of the state and social issues. Tomorrow: Immigration and the Voting Rights Act.