Texas voters remain concerned about the economy and immigration, and they continue to believe the state is moving in the right direction while the country is on the wrong track, according to the University of Texas/Texas Tribune Poll.

The economy leads the list of most important problems facing the country, at 24 percent, followed by federal spending/national debt at 19 percent and political corruption/leadership, at 11 percent. Those three items together accounted for more than half of the responses to that question.

Immigration, at 15 percent, and border security, at 13 percent, lead the state list, followed by unemployment/jobs, the economy and education. Those rankings have a partisan undertow. Republicans were more likely to list immigration and border security as problems. Democrats were more likely to list political corruption/leadership and education as the state’s top problems. 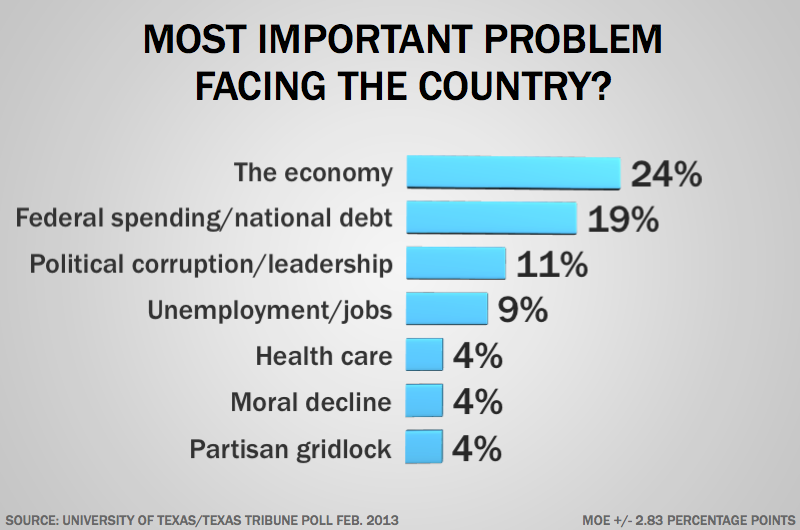 “For about a quarter of Republicans in the poll, immigration is still the biggest problem facing the state,” said Jim Henson, co-director of the poll and head of the Texas Politics Project at the University of Texas at Austin. “Democrats don’t share those perceptions. This is going to have implications for how state leaders position themselves on immigration.”

The answers also varied by race: Black and Hispanic voters listed the economy and jobs as the top state issues, while white voters listed immigration and border security as their top concerns.

"On the national stuff, it’s the first time I think I’ve seen federal spending and national debt at one-fifth. That’s a really strong number," said Daron Shaw, c0-director of the poll and a government professor at UT-Austin. "What is clear is that people simply want their leaders to solve the problem and start making progress on the problem. They’ll talk about different things depending on their constituents, but it’s not clear what they ought to be saying. The public wants the government to perform. They’re not delivering the goods on basic questions where their constituents are demanding action."

"The budget deficit issue is a marker issue for governmental incompetence," he said. 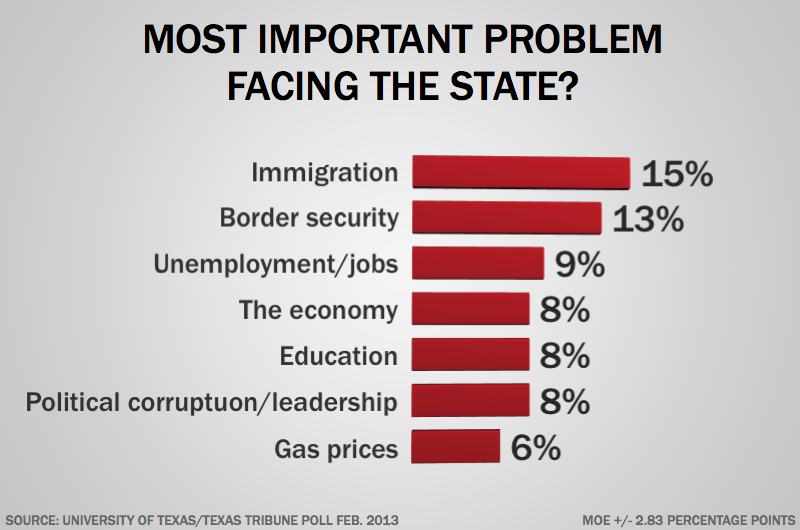 Congress remains remarkably unpopular with Texas voters. Only 3 percent approve strongly of the job Congress is doing, and only 11 percent approve somewhat. Another 12 percent neither approve nor disapprove, and the rest is negative: 23 percent somewhat disapprove of federal legislators’ work, and 48 percent disapprove strongly. Unlike some of the other results, the antipathy toward federal lawmakers crosses partisan lines.

“What can you say about Congress?” Henson asked. “You see Congress in double digits, at all, and you’re surprised. It’s the least respected political institution in the state right now, and that’s right in line with the rest of the country.”

National and state executives nearly glow by comparison. President Obama gets favorable marks from 39 percent and unfavorable marks from 53 percent. But the people who “strongly disapprove” of the job he’s doing account for 46 percent of the total, while 21 percent strongly approve.

“The governor is still in a pretty strong position,” Henson said. “That said, there’s not overwhelming support for him. If you compare his numbers to Obama’s, they don’t like Perry with nearly the same certitude that they disapprove of President Obama.”

This is the third day of stories on the latest University of Texas/Texas Tribune Poll. Also: see today’s related story on social issues. Yesterday: guns in Texas. Tomorrow: education, the state budget and water.