Most Texans favor a so-called fetal pain proposal to outlaw abortions after 20 weeks of pregnancy, according to the latest University of Texas/Texas Tribune Poll.

Their overall views on the availability of abortion haven’t changed; they favor abortion rights.

But a majority — 57 percent — support the “fetal pain” legislation, possibly because of its name, while 26 percent oppose it. A large number — 42 percent — said they “strongly support” the proposal, which Republican lawmakers have filed in the House.

“Part of this is a framing issue. The idea that you would be in favor of ‘fetal pain’ is a pretty tough position,” said Daron Shaw, co-director of the poll and a professor of government at the University of Texas-Austin.

“In Texas, the leadership on a litmus test issue, abortion, has framed the issue in a way where they’re likely to do pretty well,” he added. “But in 2012, the national election landscape was littered with people who didn’t know how to talk about the issue. If Republicans talk about parental notification or fetal pain, they do pretty well; if they talk about rape or incest, that’s a loser.” 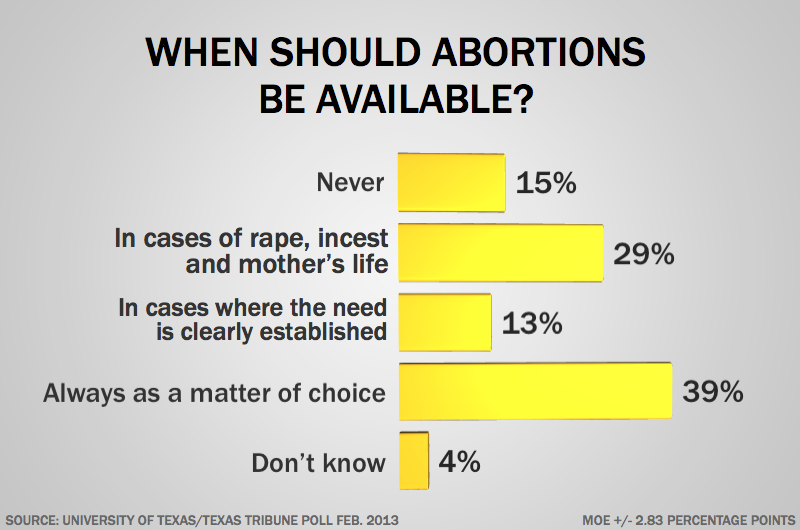 “One of the things that drives the fetal pain number up is that the phrase strongly resonates with Republicans,” said Jim Henson, director of the Texas Politics Project at UT-Austin and co-director of the poll. “If you look at the Republican numbers, they’re pretty striking.”

Gov. Rick Perry endorsed that proposal in his State of the State speech earlier this year, using the language tested a month later in the poll question. “The governor clearly knows his audience on that issue,” Henson said.

Most Texas voters don’t believe gays and lesbians should be allowed to marry, but a large majority would approve either of marriage or of civil unions, the poll found. More than a quarter — 28 percent — would allow no legal unions at all. Another 28 percent would allow civil unions but not marriage, and 37 percent said gays and lesbians should be allowed to get married in Texas.

Shaw said the numbers can also be read to say 56 percent of Texans are against gay marriage — when the civil unions-only group is combined with those who believe no unions or marriages should be allowed.

“There is clearly more of a libertarian element to responses on this question,” he said. “The balance is favorably inclined toward some accommodation.”

This is the third day of stories on the latest University of Texas/Texas Tribune Poll. Also: See today’s related story on the political mood of the state. Yesterday: guns in Texas. Tomorrow: education, the state budget and water.