Editor's note: In a previous column, Mark P. Jones, chairman of Rice University's political science department, ranked Texas state senators based on their votes during the 2011 regular and special sessions. Now he's done a similar analysis on Lt. Gov. David Dewhurst, finding the state Senate's presiding officer less conservative than some senators, but in line with about two-thirds of the Republicans in that body. Jones' paper follows.

A set of competing U.S. Senate Republican primary campaign ads aired this year, including one (by the Club for Growth) that attacked Lt. Gov. David Dewhurst for being a "moderate," and another (by Sen. Jim DeMint's Senate Conservatives Fund) that presented Dewhurst rival Ted Cruz as the "conservative alternative to Dewhurst." The Dewhurst campaign responded with an ad in which former presidential candidate and Arkansas Gov. Mike Huckabee declared the lieutenant governor to be the "right conservative for the Senate." These dueling campaign spots highlight the debate within Republican circles over Dewhurst's conservative credentials.

Based on the analysis presented here, I conclude that Dewhurst managed the 2011 legislative agenda in the Texas Senate in a manner consistent with the ideological and policy goals of a majority of the 19 Republican senators. Dewhurst also appears to be neither significantly less nor more conservative than almost two-thirds of the Republican Senate delegation, suggesting considerable ideological affinity between Dewhurst and a majority of the Republican senators.

The lieutenant governor exercises considerable control over the legislative process in the Texas Senate. Among other things, he names all committee and subcommittee chairs and members, decides to which committees bills are assigned, and through his appointed committee chairs and members indirectly determines which bills make it to the floor for a final passage vote. In addition, unlike the speaker of the House, the lieutenant governor is directly elected by voters, and therefore enjoys a greater level of autonomy than his counterpart on the other side of the Capitol. 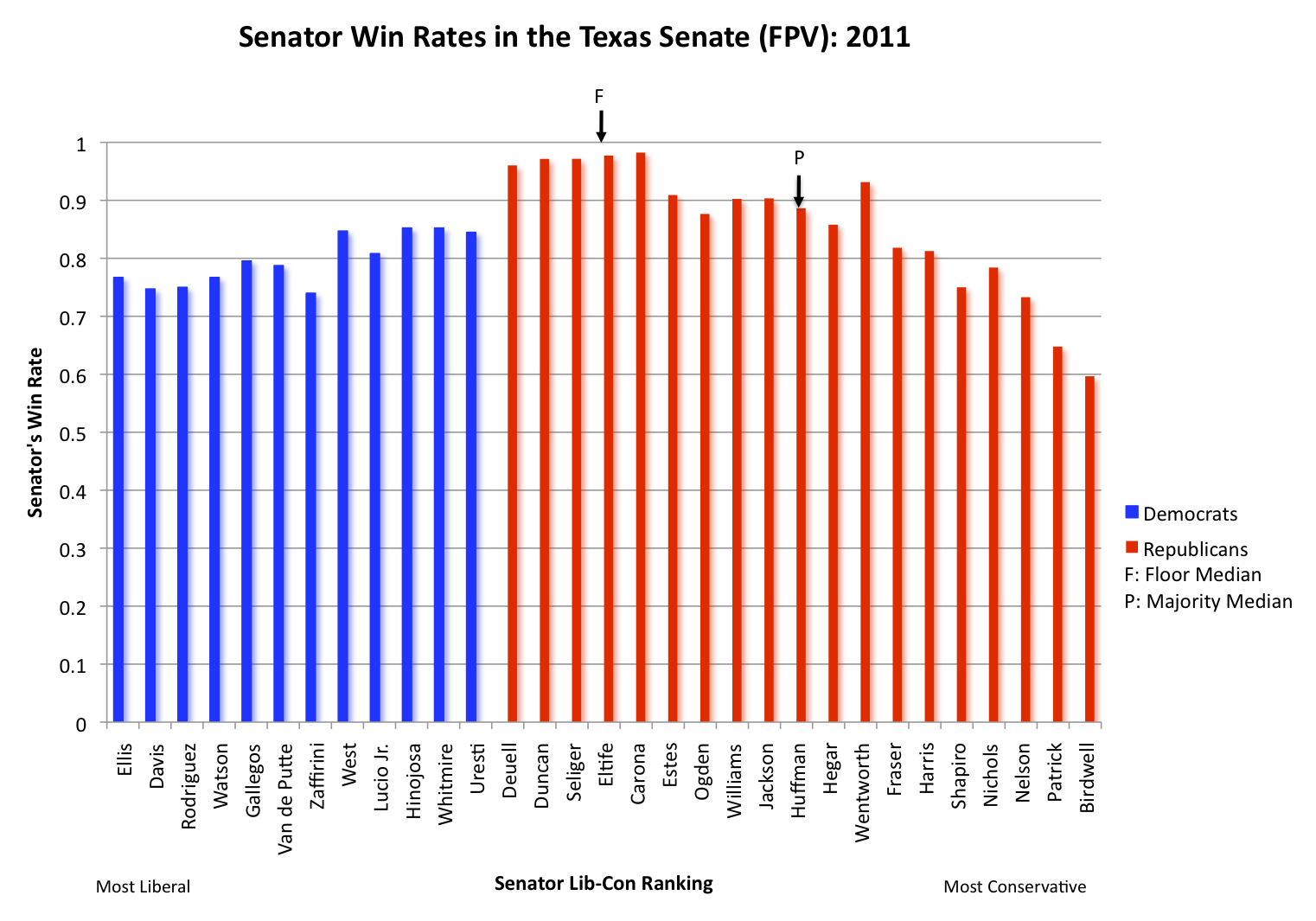 The figure here utilizes two sets of data. The first (located along the X axis) is the Liberal-Conservative Score (based on 684 nonlopsided roll call votes) for the 31 senators during the 2011 session, ranging from the liberal extreme of -1.46 (Rodney Ellis, D-Houston) to the conservative extreme of 0.54 (Birdwell). Additional information on the Liberal-Conservative Score as well as the score and ranking of all senators can be found here.

The second (located along the Y axis) is the FPV win rate for the 31 senators, reflecting the percentage of votes where the senator voted and was on the winning side of a Final Passage Vote. (Democrats are in blue; Republicans in red). In all, during the regular and special sessions in 2011, there were a total of 176 nonlopsided FPVs (i.e., where at least two senators were on the losing side of the vote). The figure highlights that it is far more common for a senator to be on the winning side of a FPV than the losing side, with a median win rate of 85 percent.

But the figure also reveals some variance among the senators, especially within the Republican Party. Senators such as John Carona (win rate of 98 percent), Kevin Eltife (98 percent), Kel Seliger (97 percent), Robert Duncan (97 percent) and Bob Deuell (96 percent) were almost always on the winning side of FPVs. In contrast, Birdwell (60 percent) and Patrick (65 percent) were on the losing side of more than a third of FPVs, and Jane Nelson (73 percent) on more than a quarter. Birdwell, Patrick and Nelson had the three lowest win rates in the Senate.

There exists much less win rate variance within the Democratic Party, with highs of 85 percent (Juan "Chuy" Hinojosa, John Whitmire, Royce West and Carlos Uresti) and relatively proximate lows of 75 percent (José Rodríguez and Wendy Davis) and 74 percent (Judith Zaffirini). All Senate Democrats had lower win rates than the least conservative (based on their Liberal-Conservative Score) dozen members of the Republican delegation. Several of the more conservative Democrats, however, had higher win rates than multiple Republicans. For example, Uresti, Whitmire, Hinojosa and West all possessed higher win rates than the seven most conservative Republicans. Perhaps not coincidentally, under the Senate's two-thirds rule (which in practice requires the support of two-thirds of the senators to allow a bill to be considered), Dewhurst needed the support of at least two Democrats (and more, when not all 19 Republicans were on board) to pass most legislation during the 2011 regular session.

The figure reveals a Dewhurst-run Senate where the senators who enjoyed the most success were in the moderate and center wings of the Republican Party. Bills opposed by these senators rarely were passed — a sharp contrast with both their more conservative colleagues as well as the most liberal members of the Democratic delegation.

Based on this data, we can infer that Dewhurst's ideological location (whether based on sincere preference or pragmatic calculations) on the liberal-conservative spectrum most likely lies somewhere near that of the Senate's more moderate Republican members such as Deuell, Duncan, Seliger, Eltife and Carona. However, given the uncertainty inherent in any indirect method of estimation, one could also reasonably infer from this data that the lieutenant governor's ideological position might approximate those of the more centrist Republicans (ranging from left to right): Craig Estes, Steve Ogden, Tommy Williams, Mike Jackson, Joan Huffman, Glenn Hegar and Jeff Wentworth.

Carona possesses the highest win rate in the Senate. We can thus utilize Carona's Liberal-Conservative Score (and 95 percent credible interval [CI]) as a rough proxy for Dewhurst's location on the Liberal-Conservative dimension. Following this procedure, we would conclude that the lieutenant governor is not significantly less conservative than any of the 12 senators from the above-mentioned moderate and centrist groups, with the exception of Wentworth (whose CI is only barely beyond the range of Carona's, and who at the same time possesses the sixth-highest win rate).

Furthermore, it appears evident from the data that the lieutenant governor guided the legislative policy process in pursuit of the best interests of the Senate Republican delegation as a whole, a reality underscored by the party's very low "roll rate" on FPVs. A party is rolled on a legislative vote when the majority of its members are on the losing side. During the 2011 sessions, the Republican Party roll rate was a mere 3 percent for FPVs and 4 percent for all votes (the rates for the Democratic Party were 20 percent and 27 percent). By comparison, the House Republican Party's FPV roll rate in 2011 under Speaker Joe Straus was 11 percent while the lowest Republican FPV roll rate during Tom Craddick's three terms as speaker was 4 percent in 2003.

What does seem clear from the data is that Dewhurst's policy preferences and degree of conservatism differ in important and significant ways from those of the Senate's most conservative members, especially Birdwell and Patrick. The two were frequently on the losing side of FPVs, noticeably more often than both their fellow Republicans as well as all Democrats. It is thus unsurprising that DeMint (the U.S. Senate's second most conservative member, and a clear outlier within the Republican delegation in D.C., according to voteview.org) is actively supporting Cruz in the Republican Senate primary in Texas. One can imagine that in Dewhurst, DeMint sees someone whose ideological profile will locate him in the center or center-right of the Republican U.S. Senate delegation, relatively distant from DeMint's position on the outer reaches of the ideological spectrum.

Is Dewhurst a "moderate?" Yes, if by that one means that he would appear to be significantly less conservative than approximately one-third of the Republican delegation in the Texas Senate.

Is Dewhurst the "right conservative" to represent Texas in the U.S. Senate? Yes, if by that one means that during the 2011 legislative sessions virtually all legislation passed by the Texas Senate was supported by a majority of the Republican delegation and that Dewhurst would appear to have an ideological profile which is not significantly different from that of close to two-thirds of the Republican delegation in the Texas Senate.