The end of the first-called special session may be in sight for the Texas Legislature, which spent most of the weekend debating measures Gov. Greg Abbott wants it to pass and worked into Sunday night trying to reconcile differences over school finance, retired teacher insurance and property tax legislation. Far from the business at the Capitol, a white nationalist rally in Virginia turned deadly — and as Texas officials weighed in, news broke that a similar event is scheduled at a Texas university next month. Here's what you need to know:

• What did the Legislature pass over the weekend? State lawmakers on Friday sent "sunset" legislation extending the lives of several state agencies and a bill aimed at cracking down on mail-in ballot fraud — even though it repeals a similar measure in the process — to Abbott, who signed the bills shortly afterward. Legislation adding abortion reporting requirements was also passed, and as of Sunday night, local annexation reform and a bill restricting abortion insurance were en route to the governor's desk. Legislators also made progress on measures requiring certain patient approval for do-not-resuscitate orders and extending the state's maternal mortality task force.

• And what didn't happen at the Legislature over the weekend? Three big issues are still wrapped up in end-of-session negotiations: School finance, teachers' health care insurance and property tax reform, the last of which is Abbott's chief priority of the special session. The "bathroom bill" — perhaps the most contentious issue of them all — appears all but dead, as do a few other measures such as a tree removal bill and a measure that would end union and association payroll deductions for most public employees in the state.

• ICYMI: A white nationalist rally in Charlottesville, Virginia, this weekend over removing Confederate statues ended in deadly violence. How did Texas officials respond? Here you go — Abbott called what happened "un-American and unacceptable," and U.S. Sen. Ted Cruz wants the Department of Justice to investigate the incident as an "act of domestic terrorism." Since we're on the topic, there's a white nationalist rally happening at Texas A&M University next month, featuring self-described "alt-right" leader Richard Spencer. Students are already planning a counter protest.

• After working most of the weekend, the House is coming in at 1 this afternoon and the Senate at 4. The lower chamber is expected to act on items such as property tax legislation, and the upper chamber is set to consider a school finance measure, among other things.

• Months after a controversial high-speed train project emerged largely unscathed from the regular legislative session, its developer has tapped two companies to help refine construction plans and cost estimates. Texas Central Partners said in a release Monday morning that Irving-based Fluor Enterprises and the subsidiary of an Italian infrastructure company could also end up designing and building the $12 billion project.

• From Ross Ramsey: The Austin school district's taxpayers will be sending the state more than $2 billion from property taxes over the next five years. That's inspiring some crazy ideas from the city of Austin.

• Activists are launching an effort along the U.S.-Mexico line to protest President Trump's proposed border wall, starting with a Rio Grande Valley church that'd be trapped between the wall and river if the construction project goes through.

• Baylor University was ordered to turn over records from an infamous sexual assault investigation.

Join us for a live recording of TribCast this Tuesday morning at the Austin Club.

U.S. Rep. Will Hurd is stopping at Dairy Queens — and other places — in a fight for political survival in the state's most competitive congressional district. (Texas Monthly)

More than 15 undocumented immigrants were found inside a tractor-trailer in Edinburg over the weekend. (The Monitor)

Advocates for disabled children are still banking on a measure at the Texas Legislature that would partially reverse therapy cuts. But chances are slim that the proposal goes anywhere, for now. (Waco Tribune-Herald)

The tree-regulating bill Gov. Abbott wants passed during the special session has hit a stump. (The Austin American-Statesman $) 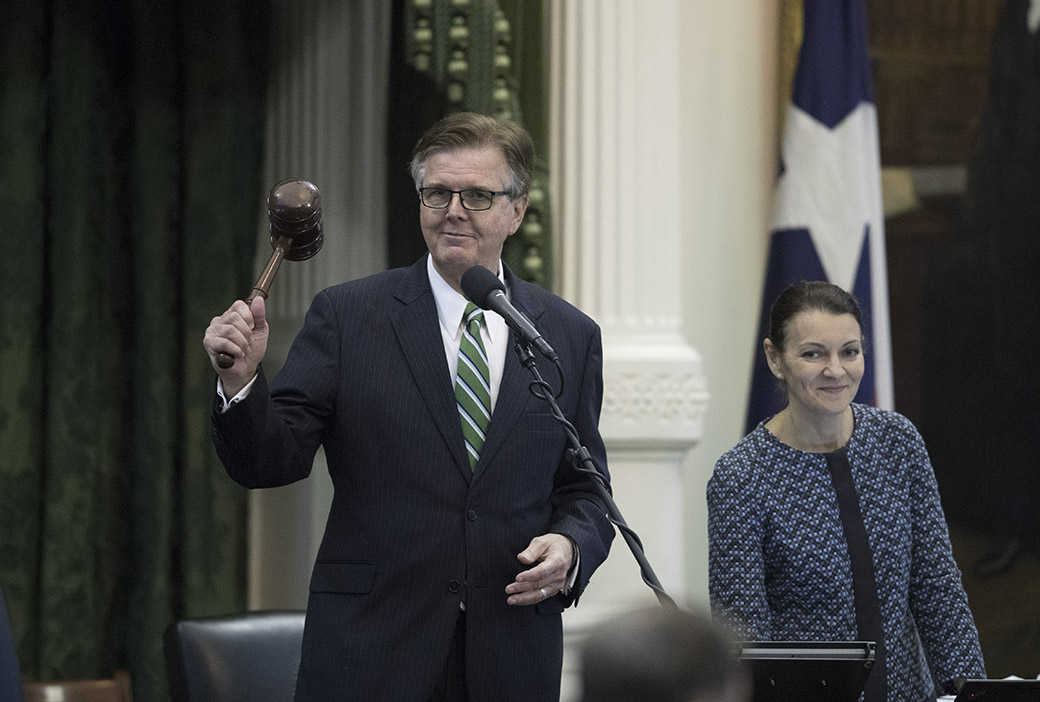 Lt. Gov. Dan Patrick gavels the Texas Senate in for a new day in the early evening of Aug. 13, with potentially four days of the special session remaining. Photo by Bob Daemmrich. See more photos on our Instagram account.

"White supremacists keep coming to our campus thinking we’re going to support them."

— Adam Key, a doctoral student at A&M University and organizer of the counter-protest to a white nationalist rally happening at the school next month.