It will connect Dallas and Houston in 90 minutes with the nation’s first high-speed rail line. And it will get the $12 billion job done without public funding.

Proponents of the Texas bullet train say it’s not only possible, but inevitable, as the United States’ interstates, bridges and tunnels near the end of their useful lives.

The key, executives say, is that there’s money to be made.

“Entrepreneurial risk will be borne by investors who understand that,” Texas Central President Tim Keith said. “The appetite for infrastructure assets by global investors is huge.”

The idea that the free market will pick up where government leaves off sounds straightforward enough. It’s one that has gained steam, especially since President Donald Trump has made overhauling the nation’s infrastructure a top priority.

But, really, how does a private company go about lining up the billions of dollars it needs to pay for a 240-mile bullet train line? And is it possible for it to actually turn a profit?

Financing is how Texas Central will get enough money to build the high-speed rail line in the first place. Funding is the revenue that will keep the train running.

Financing is the more complicated side of the equation because it’s essentially a high-stakes gamble that may not pay off for decades.

Texas Central executives are confident they’ll be able to find the money, in large part because investors are hungry for “real assets” — tangible projects, basically — that could provide bigger returns than what’s available in today’s market.

Managers of huge pots of money, like private equity funds or pension funds, “have obligations to pay their plan holders and they need long-dated assets,” Keith said.

In other words, low interest rates and other factors have meant that there aren’t a lot of places to park portions of those pools that will reliably pay out to investors over long periods of time.

That’s part of why pension funds, which are supposed to be how workers get paid their retirement, are seeking out safer investments.

Upfront money from investors will pay for roughly a third of the project, Keith said. The other two-thirds will be debt.

So far, Texas Central has raised about $115 million from investors.

“As the government moves away from funding projects on a grant basis … these loans allow them to take a less meaningful role … and allows the markets to solve for the difference,” he said.

Another potential source of cheap financing is the Japanese Bank for International Cooperation, a national development bank, which has an economic interest in shepherding Japanese technology into foreign markets.

Central Japan Railway, the company that developed the technology for the Japanese Shinkansen bullet train, is partnering with Texas Central.

“They have been following the project for years … and they continue to express interest in advancing discussions when we hit the right milestones,” Keith said.

Tetsuro Amano, the Houston-based general consul of Japan for Texas and Oklahoma, said the technology partnership with Japan Central Railway is definitely “good business,” but it’s too soon to speculate on the Japanese bank’s level of involvement.

More private capital is finding its way into projects that were once the domain of government.

The McKinsey Global Institute recently noted that institutional investors — like the pension and private equity funds Keith mentioned — “seem like an obvious source of capital” in a world where increasingly urgent infrastructure projects are seriously underfunded.

Its report said institutional investors have $120 trillion to move around. Blackstone Group, the world’s biggest private equity firm, is reported to be raising as much as $40 billion for infrastructure investments.

Of course, there are caveats.

“To attract these investors, governments and other stakeholders need to develop their project pipelines, remove regulatory and structural barriers, and build stronger markets for infrastructure assets,” the McKinsey report said.

Public-private partnerships, like toll roads, have had mixed success, including in Texas.

Still, the McKinsey report underscores the hunger for worthy projects.

“Insurance companies and banks recount instances in which investors outbid each other in a rush to finance the rare infrastructure deals they consider ‘bankable’ and that have appropriate risk-return profiles,” the report said.

All that goes to say there are institutions that could theoretically bankroll a high-speed rail line. But only if it’s a sustainable business.

And that points back to the second part of paying for a big infrastructure project: funding.

Texas Central has promised not to use tax money as funding. That leaves ticket sales, plus smaller sources of side revenue from station parking fees and concessions. Texas Central has said the project passes muster, by that measure.

“This project is fully financeable based on ticket sales,” Keith said.

That’s what experts — and critics — are skeptical about.

A 2015 study commissioned by Texas Central estimated the line would spur $36 billion in economic development over 25 years. The company estimates 5 million people will ride the train each year, with that number growing to 10 million.

While the company hasn’t worked out details such as how much passengers will be charged, executives say it will be low enough to entice Texans to leave their cars at home. By comparison, a typical flight from Dallas-Fort Worth to Houston costs $195 one way.

“We do expect to be able to attract people from their vehicles as well as airplanes,” Keith said. “We believe we’ll be competitive with airfare for business travelers.” 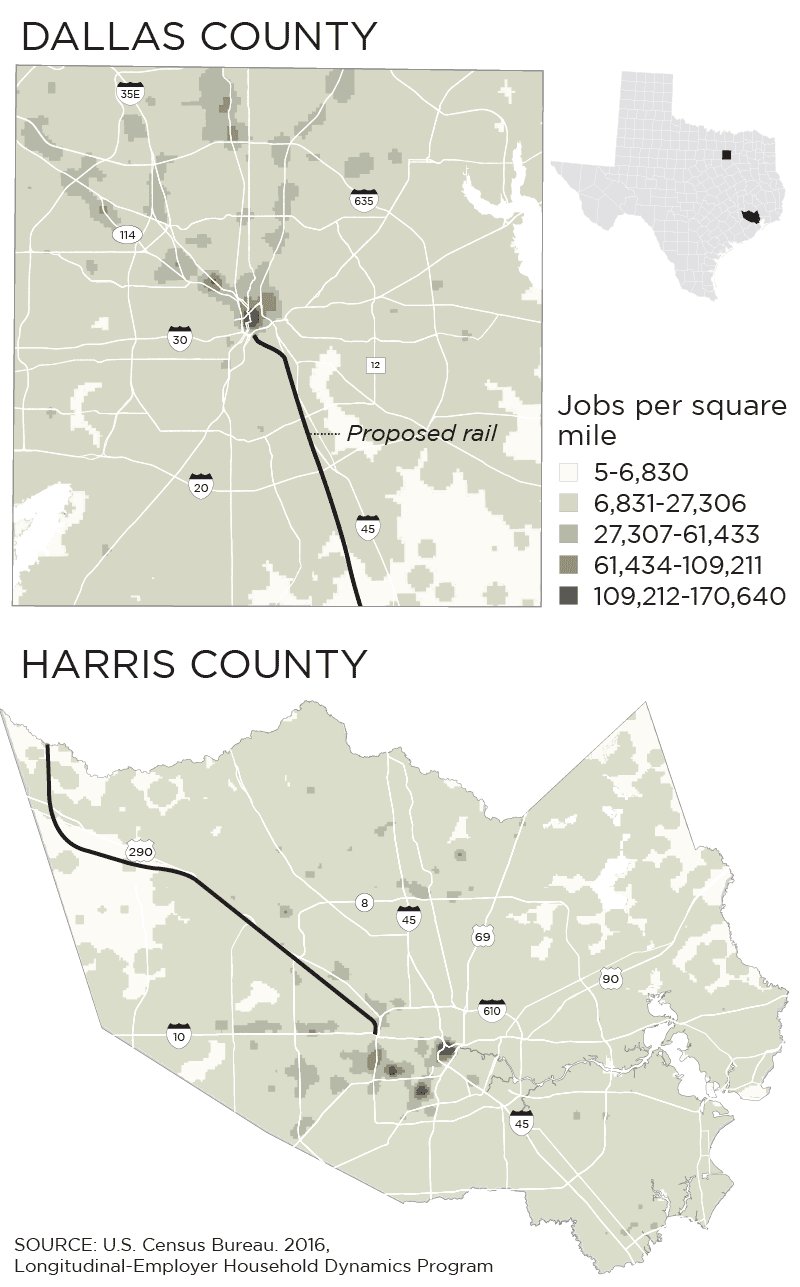 Critics suggest those projections are optimistic to the point of delusion. They contend Texans won’t forgo their cars, especially when it’s unclear how riders would get around the sprawling Dallas and Houston metros once they step off the bullet train.

And a recent report by the libertarian Reason Foundation predicted the project would operate at a loss and leave taxpayers on the hook for billions of dollars.

“In spite of their large and growing populations, Dallas and Houston are poster children for big cities where high-speed rail has no chance of succeeding without public funding unless land use and transit patterns change dramatically,” the foundation’s report said.

Texas Central sent out a lengthy rebuttal, in which the company said the report’s authors didn’t take them up on offers to look at their internal data.

“The recently published Reason Foundation report is deeply flawed and rife with uninformed biases about how Texans travel,” a company statement said.

More broadly, Bennon said, research has shown that very few rail lines around the world are profitable from ticket sales alone — and the ones that are profitable have multiple huge cities along the route where riders can easily transfer to local transit.

None of that means a Texas bullet train is doomed to fail, though, Bennon wrote in an email.

“This project is in a whole new league,” he said. “There’s no real precedent for high-speed rail financed completely by the private market in the U.S.”

Many of the factors that led Texas Central to pick its Dallas-to-Houston route in the first place are crucial. The distance makes a high-speed rail line competitive with airlines, and ride-hailing apps like Lyft and Uber mean that readily accessible public transit is becoming less of a factor.

Plus, the mere fact that Texas Central’s plan relies almost entirely on private investment means its ridership projections have to stand up to stronger scrutiny, Bennon wrote.

“Investors in that company and eventually the lenders will certainly have every incentive to get the numbers right,” he said. “It’s their money that’s going to be on the line.”

So what if the critics are right and no one rides the train?

Bennon said that a lot of things would have to go very wrong in order for taxpayers to be stuck with the full tab. If ridership is lower than expected, first, investors would lose their money, then the project would have to go into bankruptcy and lenders would take a loss.

“In terms of the benefit to the taxpayers of Dallas and Houston, this can be a win-win scenario,” Bennon said. “If it’s structured correctly, only in the most extreme cases of very low ridership or massive cost overruns would a project get built and later have to cease operations or get a bailout.”

Texas legislators don’t seem inclined to let that happen. Among the slate of more than 20 bills legislators filed this month to derail the bullet train project were measures that would prohibit the state from spending its money operating a failing rail line.

Brandon Formby of The Texas Tribune contributed to this report.

Read more in this series:

Disclosure: Texas Central Partners, Uber and Lyft have been financial supporters of The Texas Tribune. A complete list of Tribune donors and sponsors can be viewed here.

Stories written solely by The Texas Tribune are available for republication. For republishing opportunities, contact Natalie Choate at nchoate@texastribune.org.