The Texas Legislature is in its final weeks and Sandra Bland's family says lawmakers have disappointed them with the bill named in Bland's honor. Here's what you need to know:

• The family of Sandra Bland called the bill named in her honor a "missed opportunity" and said it doesn't address the cause of her arrest. "It's a complete oversight of the root causes of why she was jailed in the first place," said Sharon Cooper, Bland's sister and family spokeswoman.

• The "Sandra Bland Act" now focuses primarily on mental health issues and county jail operations. The criminal justice components of the bill — which would have addressed Bland's arrest — were struck amid criticism from police groups that it would hamper law enforcement's work.

• Bland was pulled over in 2015 after failing to use her turn signal. The routine traffic stop escalated, and Bland was arrested. She died by suicide in a county jail several days later. The officer that arrested her was later fired.

• The House left an important bill in a dangerous spot, lost it, and might have created an advantage for the Senate.

• Thursday was a big deadline for the Texas House. Here is the long and frustrating day in pictures.

• Sen. John Cornyn could face resistance from his fellow senators if he's tapped by Donald Trump to lead the FBI.

• In a rare twist, Republicans and Democrats are jointly pushing an effort to crack down on voter fraud. The measure targets ballots cast at nursing homes, and it could make it easier for older Texans to vote.

• At least three members of the U.S. House are mulling a run for a possible U.S. Senate vacancy, should President Donald Trump appoint U.S. Sen. John Cornyn as the new FBI director.

• Texas Southern University on Friday canceled a commencement speech by Republican Sen. John Cornyn of Texas. There had been outcry among students at the historically black university.

• Ahead of Mother's Day weekend, the Texas House’s self-labeled Freedom Caucus killed two bills aimed at helping the state curb its alarming rise in mothers dying less than a year after childbirth.

• A Fort Worth man who claims he did not intentionally kill an 89-year-old man had his looming execution halted Friday afternoon.

• A bill meant to regulate ride-hailing companies has now made its way to the Senate — and senators have revived controversial language that would define "sex" as "the physical condition of being male or female."

• Senators believe they have found a way to save $80 million on health care for state employees.

• Long-simmering tensions among House Republicans have boiled over.

Mother’s Day in an ICE Detention Center, The Intercept

Lindsey Graham says Cornyn would be too political a pick to head FBI, Austin American-Statesman 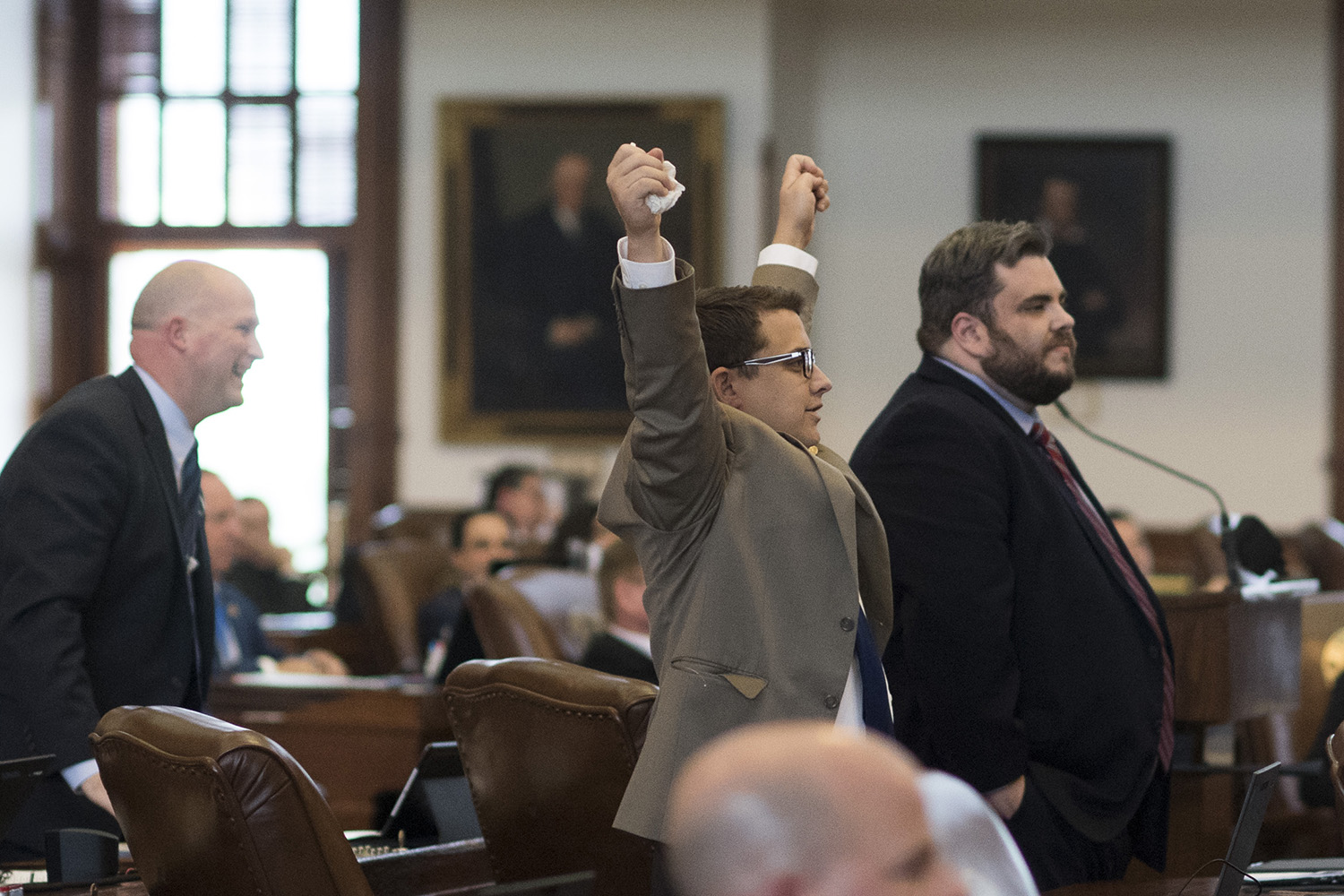 State Rep. Briscoe Cain, R-Deer Park, one of the members of the Texas Freedom Caucus, raises his arms in celebration. Photo by Bob Daemmrich for The Texas Tribune. See more photos on our Instagram account.

“When was the last time you heard about a voter fraud bill that actually made it easier to vote?”

— Rep. Tom Oliverson of Cypress, one of several Republicans championing an effort to crack down on voter fraud.

The Brief is written and compiled by your morning news barista, Bobby Blanchard. If you have feedback or questions, please email thebrief@texastribune.org.