Issues surrounding surveillance and questions of paranoia kept coming up this week: Lawmakers secretly filmed; “cop watchers” keeping eyes on the police; the governor instructing the Texas State Guard to keep an eye on the feds; and food — lots of it, not just the occasional taco — being pilfered from Capitol committee rooms ... can 24-hour food cams be far behind?

Or are they already there?

This week’s Texas news-inspired playlist has a quartet of paranoia-themed songs — but we’re not telling you where they’ll crop up.

Reporters last week got their hands on this memo: 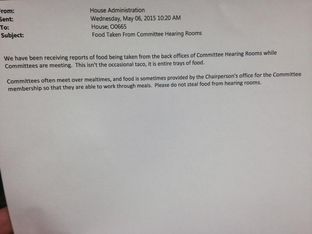 Later, the Tribune’s Todd Wiseman took this picture at the Capitol: 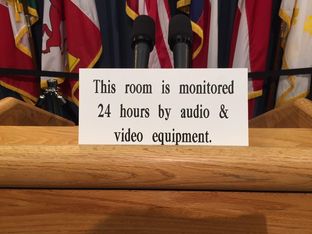 All the while, people tied to a group called the American Phoenix Foundation have been reportedly shadowing lawmakers and lobbyists — at the Capitol, in restaurants and possibly elsewhere — secretly filming them, on the hunt, they say, for hypocrisy. Now the Texas Department of Public Safety is investigating, so here’s  “Os Dps de Sao Paulo” from Bezerra de Silva.

The Texas Rangers were called on for another investigation this week, after a stormy Texas House Transportation Committee session saw Rep. Jonathan Stickland, R-Bedford, ejected on orders from Chairman Joe Pickett, D-El Paso. Seems witnesses who weren’t actually there were signed up to testify, which is against the rules and maybe the law, so here’s Billy Bragg enunciating what all’s “Against the Law.”

Stickland has cut quite a swath in his first two sessions. The Tea Party-backed lawmaker has been more than willing to step on toes and ruffle feathers. As Morgan Smith’s profile shows, he may not be making a lot of friends among his fellow representatives, but he says he’s only interested in the wishes of those who elected him. Asleep at the Wheel says you should “Dance With Who Brung Ya.”

“Senate Gives High Sign to Limited Medical Marijuana” was the headline on Eva Hershaw’s story detailing that chamber’s action on a subject that’s been surprisingly robust in the session’s very conservative Legislature. On the House side, outright legalization easily made it out of committee. It may not get much further than that, but the times they are definitely a-changin', so here’s a trio of remarkable covers of the Bob Dylan classic.

A measure to protect breast-feeding mothers in the workplace is facing some opposition in the Senate — from two women, state Sens. Lois Kolkhorst of Brenham and Donna Campbell of New Braunfels, who say it’s a matter of small government. “I didn’t think I needed to pick between my career and breastfeeding my babies,” said one public school teacher who was told she could no longer take breast-pumping breaks. Here’s “Let Your Milk Down Mother” by John Noerdlinger.

Milk came up again in the Legislature last week, when the House tentatively expanded the sale of raw milk to consumers. Listen to Ella Mae Morse singing “Cow Cow Boogie.”

Finally, we wrapped up our Spring Member Drive on Thursday. It was our best spring effort yet, so for all the generous folks who pitch in to make citizen-supported journalism possible, here’s the one and only Clifford Brown playing “Joy Spring.” Enjoy!