Before Antonio Buehler heads out into the streets of Austin on a recent Friday night, he writes his lawyer’s phone number on his arm with a Sharpie. That way, he can reach her if he gets arrested.

It’s standard procedure for Buehler, 37, who spends many weekend nights driving around the city looking for police activity — like traffic stops and arrests — to film with his iPhone. Later, he'll post online the videos of what he calls "cop watching."

“We think being out here is a deterrent to bad policing,” said Buehler, an Austin activist who founded a group called the Peaceful Streets Project in 2012. “When we film police officers, it tends to make police officers act with more respect towards the people they’re interacting with.”

Austin police disagree. They have arrested Buehler four times while he’s photographed or filmed them, alleging that he interferes with their jobs and endangers the public.

"There's a difference between videotaping the police and agitating the police," said Austin Police Chief Art Acevedo, arguing that Buehler does the latter. 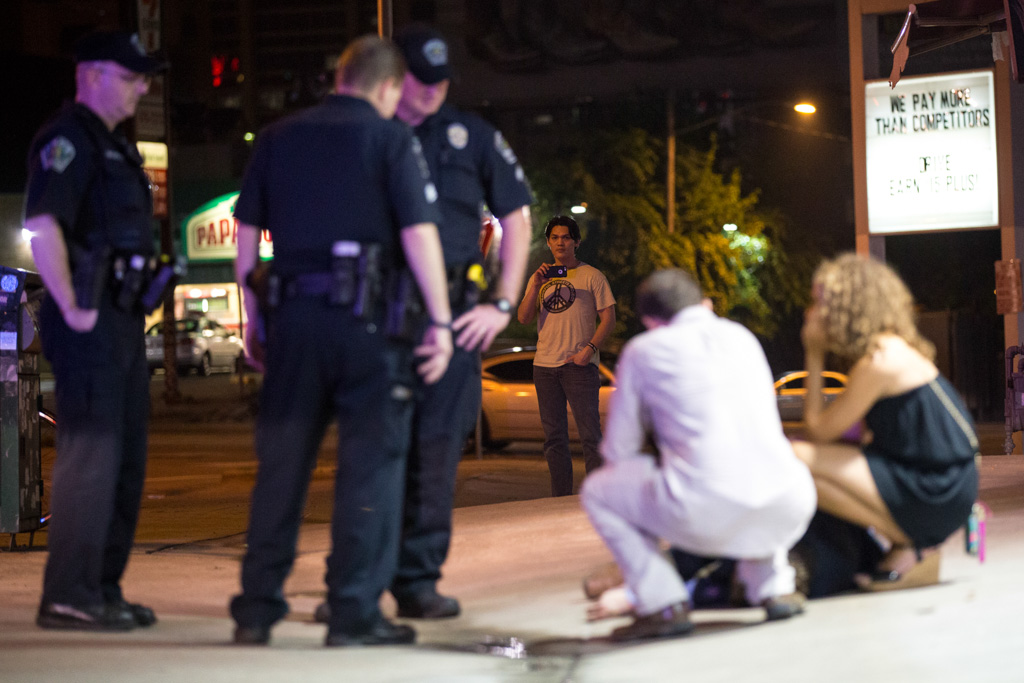 In the past year, as tensions between police and communities like Ferguson, Mo., and Baltimore, Md., have made international headlines, interest in filming police is growing. But as cop watching becomes more common, so do disagreements like the ones between Austin police and Buehler. Now those debates are moving from streets and courtrooms to state capitols, with advocates on both sides asking lawmakers for more protection.

While most experts and police groups agree that people have a right to film law enforcement officials on duty, the law is unclear on how, if at all, that right can be restricted. Police say that some cop watchers get too close to the action and could be guilty of "interference with public duties," a misdemeanor in Texas. But everyone has a different opinion on how close someone can get, and what "interference" means.

“Right now, the legal standard tends to be pretty vague,” said Peter Moskos, an associate professor of criminal justice at John Jay College of Criminal Justice in New York and a former Baltimore police officer. “It is very gray and it is subjective.”

In August 2012, Antonio Buehler was arrested by an Austin police officer while filming police activity in downtown Austin. These are excerpts from Buehler's video of the incident.

Buehler is not the only figure who has made Texas a flashpoint over cop watching. In North Texas, Kory Watkins — best known for his gun rights activism — has combined his push for loose gun laws with calls for more police accountability. He's one of the leaders in a group called "Open Carry Cop Watch."

The group, based in North Texas, follows police scanner traffic in cities like Dallas and Arlington so its members can drive to areas of law enforcement activity and film what happens. But they don't just have cameras when they encounter police officers; they're also carrying weapons such as AK-47 and AR-15 rifles. Those are legal to openly carry in the Lone Star State, and Watkins is lobbying lawmakers to add more types of guns, like holstered handguns, to that category.

“If people want to walk around with guns and film [police], this is America, we have the right to do so, it’s protected,” Watkins said. “And if they’re uncomfortable, or they’re afraid, they shouldn’t have that badge on.”

Police say what Watkins is doing raises real questions over when technically legal practices — like cop watching and openly carrying rifles — can become hazardous. They've arrested him and other members of his group for offenses like interfering with public duties, arguing that the activists' guns divert their attention.

In September 2014, North Texas activist Kory Watkins was briefly detained by police in Arlington while filming the scene of a police investigation and carrying a revolver on his hip. These are excerpts from a video he posted online of the incident.

At a recent public hearing at the Texas Capitol over open carry legislation, Arlington Police Chief Will Johnson gave lawmakers a DVD packed with videos his officers had taken of open carry cop watchers, including Watkins. He described them as "armed individuals monitoring police radio traffic, and showing up on police calls for service or traffic stops, only to interfere with a police officer’s ability to perform their official duties."

The police chief added that lawmakers should consider making the offense “interference with public duties” a felony instead of a misdemeanor if the alleged offender has a weapon.

Frederick Frazier, a police detective in Dallas and lobbyist for the Dallas Police Association, said it’s only a matter of time before a person — armed or not — who is filming police will create real problems.

"At a certain moment, that person's going to come up to that officer and distract him, and it's going to end up killing that officer, or killing the individual that's in the car that he's talking to, or the citizen that walks up and [is] doing the filming," Frazier said in an interview.

Watkins said he's never pointed his gun at an officer. And Buehler — who doesn't allow his group to carry guns while cop watching — said he's always careful to film from a safe distance and stay out of an officer's way.

"I think that if we exert our rights that the police may try to influence legislators to write new laws that trample those rights," Buehler said. "They don't want to be documented. They don't want people holding them accountable. ... That's why they come after people who are filming."

Lawmakers in at least eight states have considered legislation this year dealing with recording police officers, according to the National Conference of State Legislatures.

Perhaps nowhere was legislation more controversial than in Texas. State Rep. Jason Villalba, R-Dallas, proposed requiring most people filming police officers to stand at least 25 feet away — or, if they're carrying guns, 100 feet away. Some credentialed media could be exempt.

“Distance is our friend. If you can keep a distance, we can do our job,” said Frazier, who helped draft the bill. “There’s no reason you cannot film from a distance and get the same results that you wanted in the first place.”

The legislation drew praise from police groups and experts like Moskos, who say it would provide clarity for both police and cop watchers. But it drew harsh criticism from lawmakers across the political spectrum in Austin.

State Rep. Jonathan Stickland, R-Bedford, called it “one of the most anti-liberty, anti-transparency, anti-free speech, big government, police-state promoting pieces of legislation I have ever read” in a Facebook post.

Villalba withdrew the legislation before it received a public hearing. He declined repeated requests for an interview.

Most of the legislation pending in other states takes a different approach, more on the side of cop watchers. In Connecticut, for instance, a Democratic state senator proposed penalizing police officers who interfere with people photographing or filming them.

Police groups have tended to oppose such bills, arguing they create more confusion.

Bills aimed at protecting cop watchers in Texas have also hit snags. State Rep. Eric Johnson, D-Dallas, proposed adding a provision in state law that would clearly say filming a police officer in itself could not be called “interference with public duties.” But Buehler vehemently opposed it because the proposal also stated that an officer may give a “reasonable” order to a cop watcher to change his position or move back.

Buehler has twice been charged with failing to obey a lawful order when he refused to move back after police officers told him to do so. The charges were later dropped, but at a public hearing last month, he said the proposed bill would have assured a conviction.

In September 2012, Antonio Buehler was arrested by an Austin police officer while filming a DWI stop on W. Sixth Street. These are excerpts from Buehler's video of the incident.

“You are actually going to give the police a convenient tool to harass and arrest us,” Buehler told Johnson at the hearing. “All they have to do is order us to move from Point A to Point B.”

"What we cannot do is completely tie the police officer's hands and say, 'You can never tell anybody they've got to move,'" Johnson said in an interview. "It's a tough balancing act." The bill remains pending in the Emerging Issues in Texas Law Enforcement Committee of the Texas House.

In the meantime, activists across the country are gearing up for more filming of police.

"This has been a really big year for cop watch," said Jacob Crawford, who founded his own group in Oakland, Calif., in 2000. In the past year, he's traveled the country training cop watchers and is about to start an online course called "Cop Watch College." He's also raised thousands of dollars through crowd-funding websites to buy and distribute cameras — an idea he says was inspired by Buehler distributing cameras in Austin.

On that recent night in the Texas capital, in a coffee shop parking lot, Buehler tells the four activists who are cop watching with him: "You just have to make your own decision if a police officer gets up in your face, tells you to back off. You can either flex your rights and risk going to jail, or you can just listen to them to avoid going to jail."

"Each person's in their own situation," Buehler continues. "But if you go to jail, a lawyer's going to be on your side, and we'll be waiting for you when you get out."

Editor's note: This story is part of a collaboration between The Texas Tribune and Reveal, a new public radio show and podcast from the Center for Investigative Reporting and PRX. Michael Montgomery of Reveal contributed to this report.