CASTLEWOOD — The staff at the Loving Care Learning Center knows to keep several gallons of water on hand, or the children in their care could go without water on any given day.

This small unincorporated community on Houston's northern outskirts is plagued with regular, random water shut-offs, or notices to boil water before using it. At the day care, where about 50 children regularly fill the halls, the staff depends on a stockpile of emergency water to cook, wash dishes and clean the children’s hands.

“As soon as the water cuts off, we have to run to the storage” where the back-up water is kept, said teacher Jessica Liberado. If the water is out for a full day, the staff goes through at least 20 gallons.

While thousands struggle along the Texas-Mexico border for access to clean drinking water, Castlewood's experience demonstrates that safe water issues are not limited to the border. State Rep. Armando Walle, D-Houston, is pushing a bill that he hopes will help Castlewood residents, and shine a light on other communities that lack reliable clean water.

Walle’s legislation would give the Public Utility Commission power to revoke the company’s “certificate of convenience and necessity,” or CCN, which essentially grants Suburban sole control over water service in the area. Under Walle’s measure, the state would appoint another manager while the company is auctioned off.

“The goal was obviously to send a message to this company,” said Walle. “Our folks are held hostage.”

Unincorporated areas like Castlewood are home to 1.7 million residents in Harris County — 40 percent of its total population, according to a population study by the county. Because cities don’t extend water service to those areas, an assortment of water suppliers fills the gap. More than 500 such suppliers in Texas are investor-owned utilities, like Suburban, that operate for a profit. 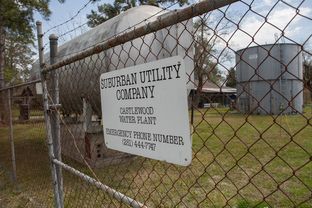 Enlargephoto by: Leslie Boorhem-Stephenson
For-profit Suburban Utility Company, which provides water to 330 families, has repeatedly been cited by the Texas Commission on Environmental Quality for violating safe drinking water standards.

In 2012, Texas Commission on Environmental Quality investigators found a caved-in roof and fence, a leaky water tank and exposed electrical wires at Suburban's water treatment plant. Requests for maintenance, operating or inspection records of any kind turned up nothing. The state regulators sent the company notices of violation and asked for proof that the problems were fixed. But residents say nothing changed, and soon, water outages were occurring at least once a month.

Last year, Suburban slapped a $60 surcharge on water bills in Castlewood and two other subdivisions to raise nearly $1 million needed to fix failing equipment, the company said in state filings.

That was the final straw for Connie Esparza and her husband, whose monthly water bill shot from $40 to $100. Esparza and a handful of other residents convinced more than 150 neighbors to sign letters to the state complaining about Suburban.

The Public Utility Commission, which regulates utilities in the state, eventually overturned the surcharge. But that prevented the company from making the repairs it needed, Suburban’s attorney Les Romo said in an email to The Texas Tribune.

“The state continues to fight my client’s efforts to try to get the necessary funding,” he wrote. He added that Suburban has applied for a loan from the Texas Water Development Board but was denied, and it’s been unable to secure a loan from private banks.

State records show that when investigators returned in 2014, they continued to find problems. When Suburban’s attorney refused to let them visit again, the state obtained a restraining order and sued the company in Travis County district court, according to the attorney general’s office.

The lawsuit, which seeks civil penalties upwards of $1 million, is still pending. But a temporary injunction has been issued that orders Suburban to install new valves across its water system, and get an evaluation from an independent engineer of the repairs it will need to make. 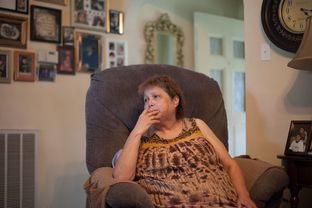 Enlargephoto by: Leslie Boorhem-Stephenson
Castlewood resident Olivia Gil and her family last year began spending as much as $100 a month on bottled water to cook and clean.

The valves seem to have improved the situation, and there have been no water outages in Castlewood in recent weeks. But residents worry the water could go off any day.

“It’s been one nightmare after the other,” said Olivia Gil, 68, who lives here with her husband and son.

Last year, her family began spending as much as $100 a month for bottled water to cook and clean. That’s caused them to cut back on groceries and other expenses, she says.

Though Walle’s bill could give Castlewood families some reprieve, it’s unclear whether it would grant them reliable access to clean drinking water. Whoever is willing to take over Suburban will have to spend hundreds of thousands of dollars on repairs, and state law says some money will have to go toward compensating the previous owners for their lost business.

The proposed fix to this local problem is emblematic of a lack of regional and state solutions to water accessibility issues, Walle and experts say.

“There has to be a fundamental change in how we provide water to our residents,” said Walle, who lives down the street from Castlewood and attends a church in the neighborhood. “We have a patchwork water policy.” 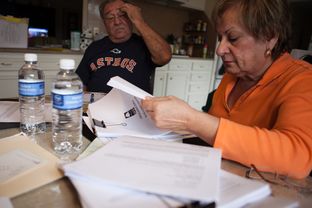 Enlargephoto by: Leslie Boorhem-Stephenson
Connie Esparza and her husband, Alex V. Rios, have worked with a handful of other Castlewood residents to organize against their water supplier.

Though she commended Walle’s initiative to help this community, Wendy Jepson, an associate professor at Texas A&M University and an expert on water governance, said narrow bills designed to deal with a specific community’s problems are “continually creating” a fragmented water system.

Lawmakers should recognize that water accessibility issues occur across the state and tackle those challenges through comprehensive legislation rather than through a piecemeal approach, Jepson said.

“Maybe it’s time to think bigger,” Jepson said. “I don’t think it’s going to happen in this legislative session, but certainly there’s enough time for the next legislation for something to be put forth beyond these local individual solutions.”

For Esparza and her husband, Alex V. Rios, Walle’s bill is a step in the right direction after years of water woes. For years, the couple has purchased bottled water for drinking and cooking because they distrust the tap water, but they still struggle with the uncertainty of whether they will even have running water when they wake every morning.