Wisconsin Gov. Scott Walker has erased U.S. Sen. Ted Cruz’s strong lead among Texas Republicans in the volatile and still-developing race for the party’s 2016 presidential nomination, according to the latest University of Texas/Texas Tribune Poll.

Cruz’s 25 percentage-point lead over Walker in October has vanished: The Texan won the support of 20 percent of the state’s registered voters to Walker’s 19 percent — a statistical tie. Former Florida Gov. Jeb Bush and author Ben Carson were tied at 9 percent, and former Texas Gov. Rick Perry was next at 8 percent.

“Scott Walker is clearly breathing some of the oxygen on the right. The big takeaway here is that Ted Cruz is still a giant among Texas Republicans — but he is not invulnerable,” said Jim Henson, co-director of the poll and head of the Texas Politics Project at UT-Austin. “Conservatives are willing to look at another candidate who fits that profile.”

In the October UT/TT Poll, Cruz registered 27 percent of the support to Walker’s 2 percent. Perry, now running fifth, was running second a few months ago.

“This is the first real shakeup in this that we have seen,” Henson said. “We’re now a year out from primary season. It’s not really a race yet, but it is a shift, and people are probably starting to think about it.”

Other candidates lagged behind: Mike Huckabee, at 5 percent; Rand Paul and Marco Rubio, at 4 percent; Sarah Palin at 3 percent; Chris Christie, 2 percent; Bobby Jindal, John Kasich and Rick Santorum, at 1 percent; and Carly Fiorina, John Bolton and Lindsey Graham at zero. Thirteen percent of the voters said they have not made up their minds.

“It clearly is a jumble,” said Daron Shaw, a professor of government at UT-Austin who co-directs the poll. “Cruz continues to distinguish himself as the Texas candidate, but Walker has made a move — we have a momentum candidate.”

That could be a mixed bag for the insurgent, Shaw said. “If you start out strong really early, the other candidates tend to turn their cannons on you.”

For the state’s Tea Party voters, it appears to be a three-way race between Cruz, Walker and Carson, in that order. Among voters who said they would remain with the GOP if the Tea Party were separate, the leaders in order were Cruz, Walker, Bush and Perry.

“As the field has become a little more crowded, it looks like it has hurt Rand Paul and complicated things that were already complicated for Rick Perry,” Henson said. 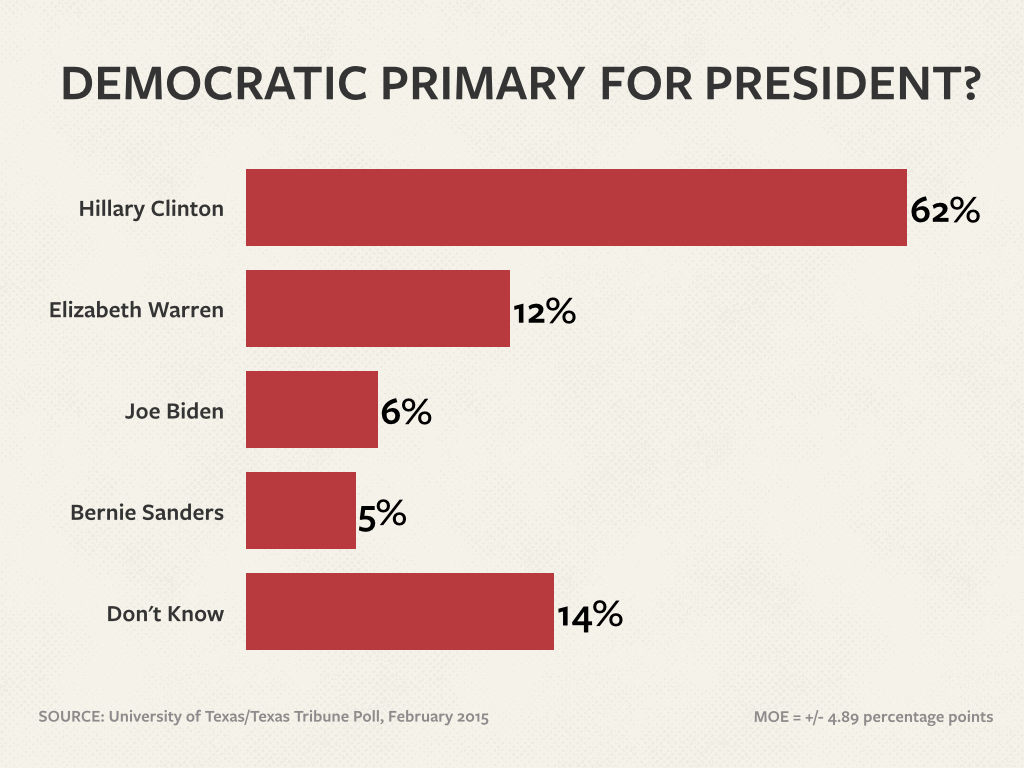 The Democratic race still belongs to former Secretary of State Hillary Clinton in Texas; she had the support of 62 percent of the state’s registered Democratic voters, according to the survey. U.S. Sen. Elizabeth Warren was second, at 12 percent, followed by Vice President Joe Biden at 6 percent and U.S. Sen. Bernie Sanders at 5 percent. Jim Webb and Martin O’Malley each attracted 1 percent of the voters, and 14 percent said they haven’t thought enough about the race to register an opinion.

Two of five voters said they have a favorable impression of Cruz, while 36 percent had an unfavorable view. Perry’s numbers were almost even, with 31 percent giving him favorable marks and 30 percent giving him unfavorable marks. But the number of people with neutral impressions of the governor or who say they have no opinion has risen sharply. Shaw said that’s because he’s no longer the governor.

“The ‘verys’ have sheathed their swords on Perry,” Shaw said. 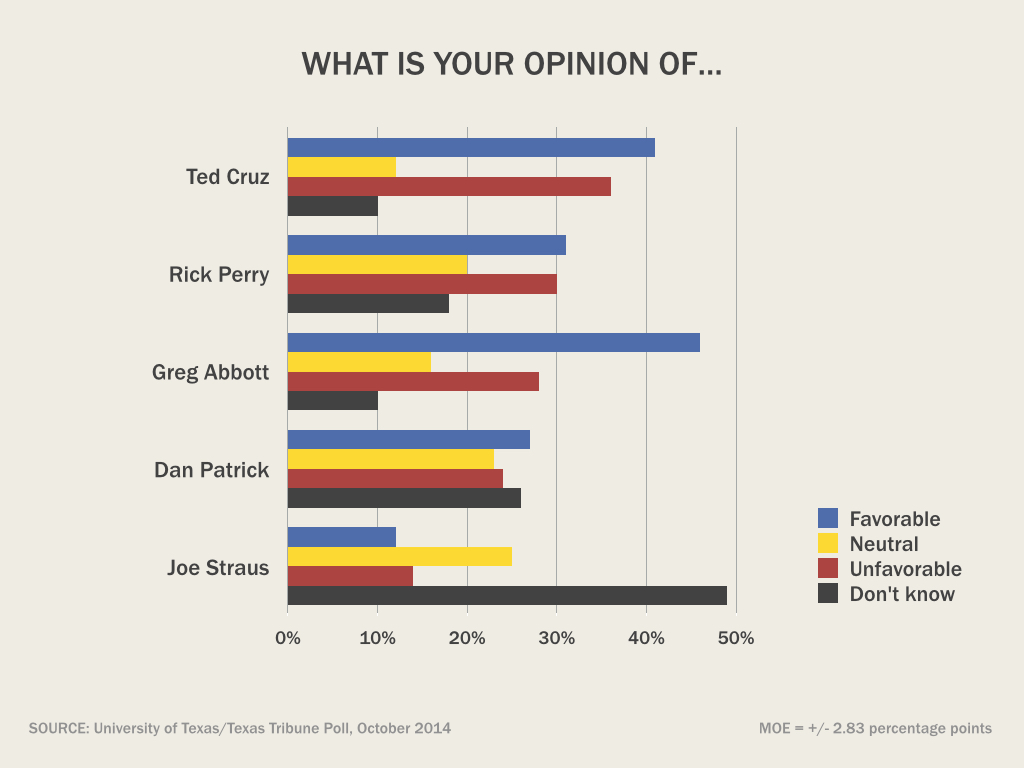 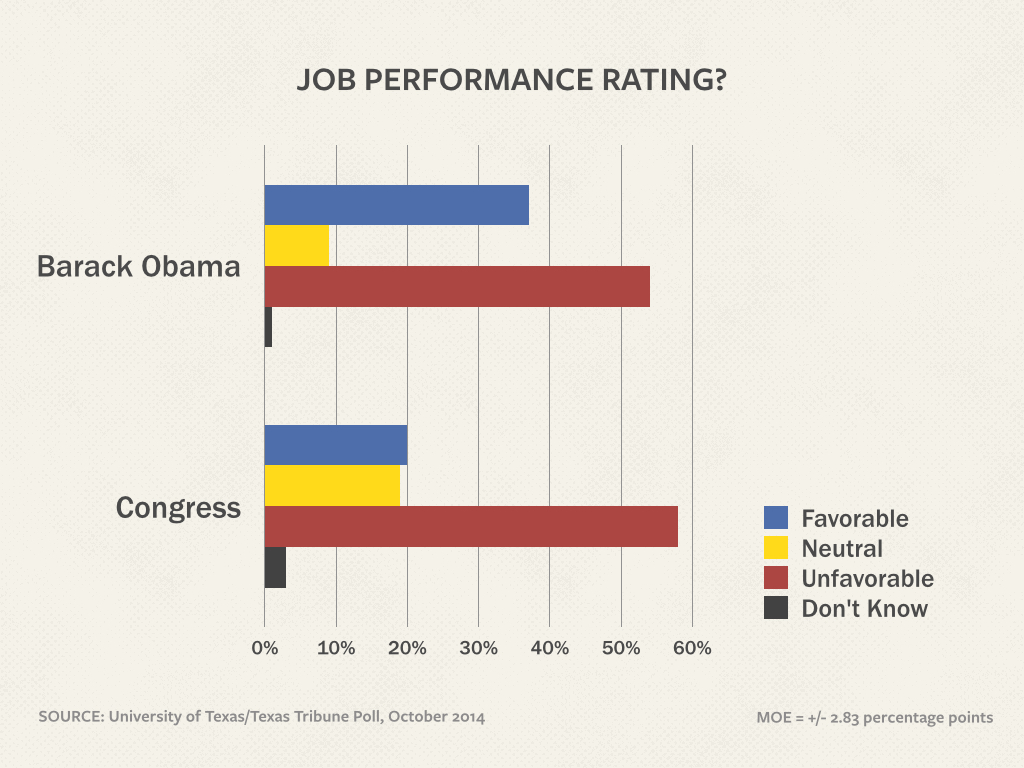 “With the Republicans in the majority in both houses, it’s not surprising to see approval moving up, even if it is hardly positive,” Henson said. “In a conservative state like Texas, when they get to 20 percent, it looks like they’ve achieved something.”

Mood of the State

The economy and federal spending/national debt top Texas voters’ list of most important issues facing the country, followed closely by national security/terrorism and political leadership/corruption. That said, no single issue jumps out: Those four items together account for less than half of the respondents on a list where all other issues were named by 6 percent or fewer.

The list of most important issues facing the state, on the other hand, is still topped by border security, at 21 percent, and immigration, at 17 percent. The two issues have persisted at the top of Texans’ concerns about the state for years, as is reflected in political attention to those issues in the 2014 elections and in the legislative session that is currently underway.

“It seems to be one-third to 40 percent consistently identify border security and immigration as the issue facing Texas, period,” Shaw said. “The other thing worth mentioning is that political corruption/leadership nationally almost breaks double digits. In the state, it’s No. 3. It beats education and the economy.”

Voter views of the economy are brightening some: 36 percent said the national economy is somewhat or a lot better than it was a year ago — that’s up from 31 percent in the October UT/TT Poll. On the other end of the seesaw, 29 percent said the economy is somewhat or a lot worse, down from 37 percent in October. A third said the national economy is about the same now as it was last year.

The University of Texas/Texas Tribune internet survey of 1,200 registered voters was conducted from Feb. 6 to Feb. 15 and has an overall margin of error of +/- 2.83 percentage points. Among registered voters in Republican primary races, the margin of error is +/- 4.19 percent; in Democratic primary races, it is +/- 4.89 percent. Numbers in charts might not add up to 100 percent because of rounding.

This is the first of several stories on the latest University of Texas/Texas Tribune Poll. Tomorrow: Texans’ views on guns and other issues.