U.S. Sen. Ted Cruz remains the top presidential choice of Texas Republican voters, but Gov. Rick Perry is starting to close the gap between the two, according to the latest University of Texas/Texas Tribune Poll.

It might not seem that way at first glance. While 27 percent of likely Republican voters say Cruz would be their choice in a hypothetical primary for the 2016 presidential nomination, only 14 percent choose Perry. Author and former surgeon Ben Carson is looming in the governor’s rearview mirror, with 10 percent, followed by former Florida Gov. Jeb Bush, U.S. Sen. Rand Paul of Kentucky and former Arkansas Gov. Mike Huckabee, each at 7 percent.

But in the June UT/TT Poll, Perry was running fourth, with 7 percent, while Cruz was way out in front with 33 percent of the respondents at his side. A year ago, Cruz had a 3-to-1 lead over the governor.

“Rick Perry’s political instincts about how to respond to law and order at the border are still pretty good,” said Jim Henson, co-director of the poll and director of the Texas Politics Project at the University of Texas at Austin. “Everyone else is milling around in the middle of the pack.” 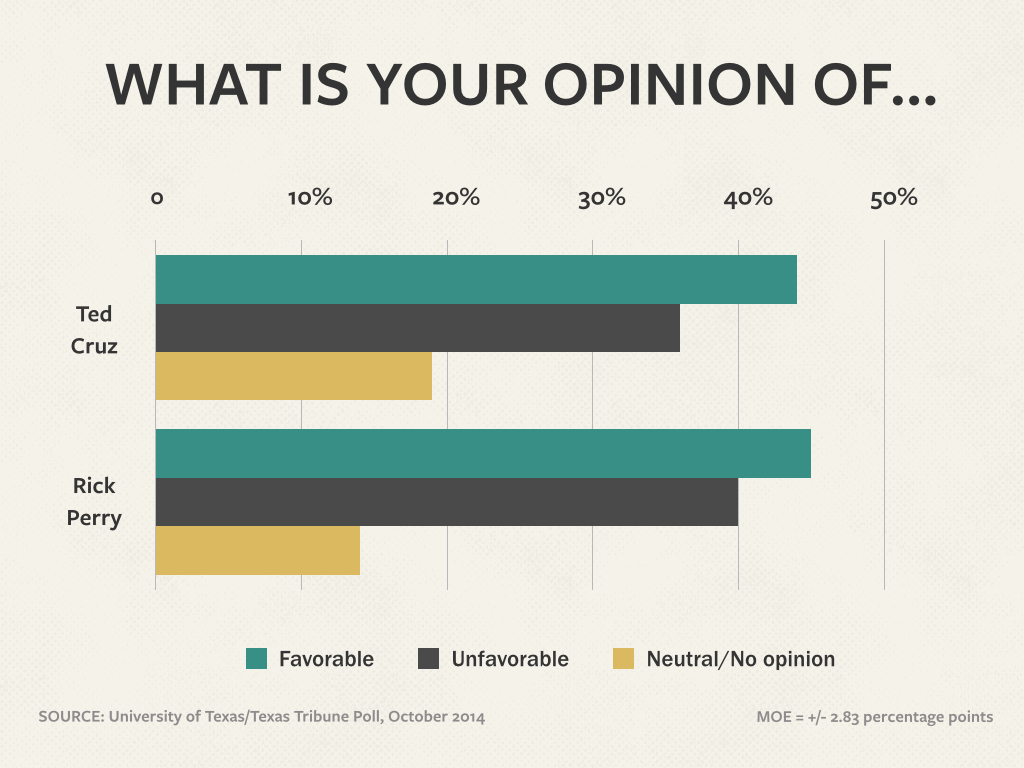 “This race on the Republican side shows that there is no heir to the throne,” said Daron Shaw, co-director of the poll and a professor of government at UT-Austin. He said the GOP tends to nominate candidates for president who finished in second place four years prior. “There’s no runner-up looking for the title this time.”

Shaw said the numbers are still volatile and the changes in the standings are relatively small. But he added that Perry’s profile is rising some. “You guys in the media love second acts, and Perry is a great second act,” he said. 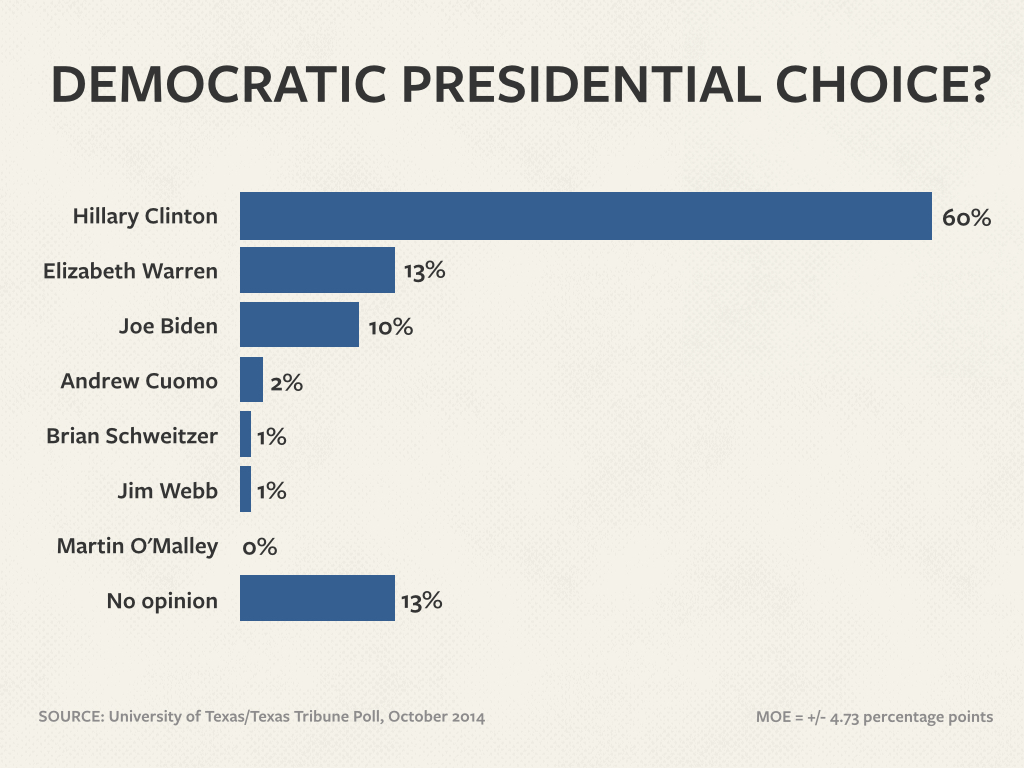 Democrats, on the other hand, have a straight-up front-runner in Hillary Clinton, who has the support of 60 percent of likely Democratic voters in Texas, according to the poll. She’s followed by U.S. Sen. Elizabeth Warren of Massachusetts, at 13 percent, and Vice President Joe Biden, at 10 percent.

According to the poll, Perry gets better job reviews than either the president or Congress, with 46 percent of Texas voters saying they approve of his performance and 38 percent saying they don’t. Among those who feel strongly about it, 22 percent approve and 27 percent disapprove of the governor’s work in office. 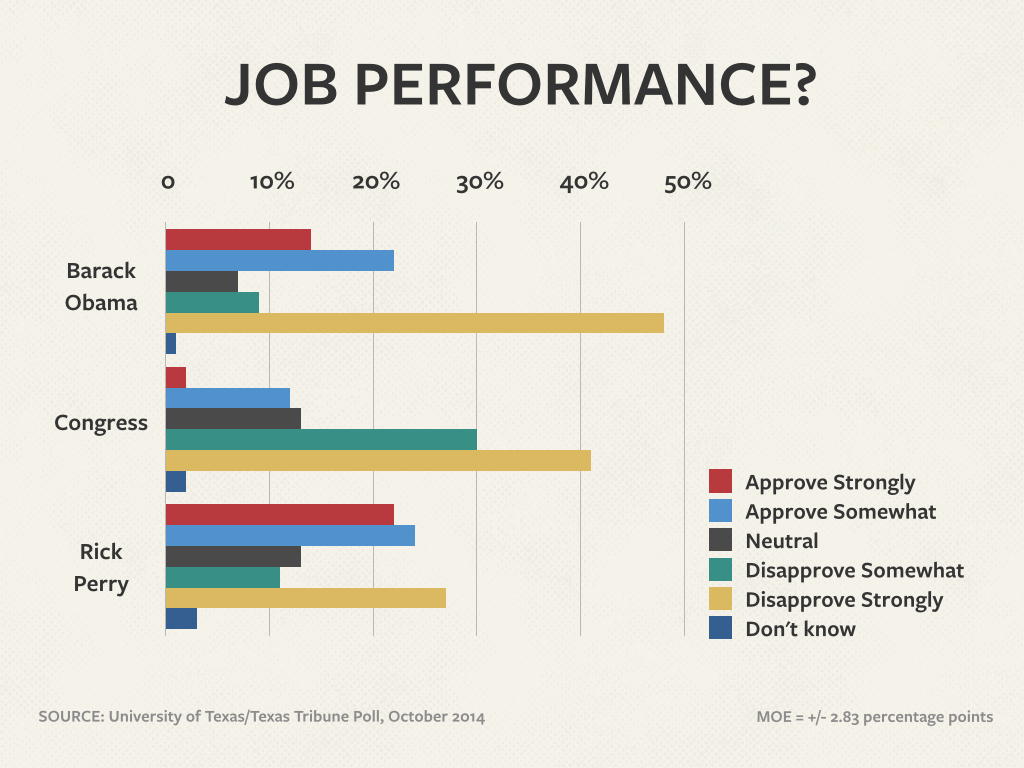 President Obama gets good reviews from 36 percent of Texans and bad reviews from 57 percent. And most of the voters who disapprove — 48 percent — say they strongly disapprove. Only 14 percent strongly approve of his performance.

“The president remains deeply unpopular, and I think we’re seeing that expressed in races from governor to dog-catcher,” Henson said. “Anyone wondering why the president has been turning up in so many ads on TV can find their answer right here.”

This is one of several stories on the latest University of Texas/Texas Tribune Poll. Yesterday: Texans’ views on the governor’s race. Next week: Texans on issues.