When we got word that reporter Reeve Hamilton was leaving us, our best wishes for his happiness and success were tempered by sadness — Reeve was among the original group of journalists hired on here at the Tribune. Higher ed was his main beat, and his time here happened to coincide with a particularly contentious and change-filled time for universities in Texas. But Reeve brought a lot more to the Tribune than superb coverage of higher education, so we’re turning this week’s playlist into a look back at his time with us and a few of his many contributions (including this feature, which he started!). First up: “Hamilton,” played by Big Scary.

The easiest way to enjoy the playlist is to download Spotify, which is a free program. But even without it, you can still follow along. Here are this week's other selections:

Many of our readers have been turned into listeners, as well, thanks to his long stint as host of TribCast, our weekly podcast looking back at big (or just interesting) stories coming out of our never-boring state. Somehow, Reeve managed the neat trick of balancing irreverence with serious discussion, making the podcast both informative and entertaining. The cast revolved weekly with the rise of stories on reporters’ individual beats, but the classic crew was Reeve, Editor Emily Ramshaw, Executive Editor Ross Ramsey and Editor-in-Chief Evan Smith. 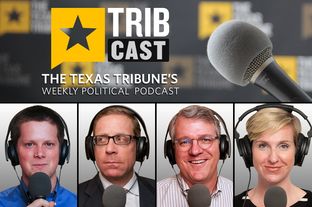 Locked in our little multimedia studio, this wild bunch was often on the edge of taking the conversation right over a cliff, but Reeve (usually) managed to keep things on track (well, somewhat). For thousands (well, tens, for sure) of listeners, the theme music for the podcast heralded yet another great listen, so here’s the full performance of Shiny Ribs’ “Texas Talking.”

The playlists themselves offered a unique way of looking at the week’s news, thanks to Reeve’s own wide-ranging listening habits. The very first Playlist started off with Guy Clark’s “L.A. Freeway”; the last song on Reeve’s last list was “Next Year Baby” by Jamie Cullum. Both are included here.

With new University of Texas System Chancellor Admiral Bill McRaven installed, UT-Austin President William Powers on his way out, and a new governor who has signaled it’s time to put the whole thing in the rearview mirror, tensions at the flagship university in Austin may be at last dissipating, but the story unfolded over years. To help make sense of it all, the Tribune published a timeline of events starting in 2008 and stretching all the way to August 2014. Almost every story in the timeline (and there are many) was written by Reeve. Of the several songs he turned to in the course of chronicling the saga, we thought "This Has Happened Before" by Rosanne Cash — referring to another UT controversy that led to the impeachment of a governor — summed it up beautifully.

As busy as higher ed stories kept Reeve, he wrote some memorable stories off his regular beat, including this moving story of an unborn 8-month-old baby killed by Charles Whitman. His mother survived, but Baby Boy Wilson was buried at Austin Memorial Park Cemetery, forgotten, his grave unmarked, for decades. It might be a little early for a Christmas song, but we wanted you (and Reeve) to hear Austin blues chanteuse  Angela Strehli singing “Sweet Little Baby Boy.”

Reeve’s profile of Kinky Friedman, who in his third run for statewide office embraced legalizing marijuana as the main plank in his campaign platform, still stands as a great read about a very colorful Texas character. That week, Reeve selected Toby Keith’s “Weed With Willie,” which we include here.

Back on the higher ed beat, one of our favorite stories from the Reeve archives was about Lamar State College-Port Arthur President Sam Monroe, stepping down after 40 years on the job. A man of singular achievement, Monroe was also a childhood friend of rock legend Janis Joplin, and well aware of the many remarkable artists that came up in the Port Arthur region — so attuned, in fact, that Reeve made a playlist for the story from his suggestions. We encourage you to listen to the whole set, but we plucked a couple of lesser-known gems from the list for ours: Harry Choates performing “Jole Blon,” and Ivory Joe Hunter singing “Since I Met You Baby.”

For anyone who ever takes on writing one of these Playlists, Reeve established a fine model. His lists proved him an adventurous and smart listener.

Reeve’s final Playlist, which went up in the week between Christmas and New Years’ Eve, is just one example, so we’ll close out letting his work, as it always did, speak for itself.

Mr. Hamilton had a lot to do with who with who we are. We take our work serious as a heart attack (to employ some Texas Talking), but not ourselves. Some of that comes from Reeve. We know great things await him, and we know he thinks the same of us, which seemed to line up perfectly with Moby singing “I’m Not Worried At All.”

Some wondered if Reeve’s new job with the Texas A&M System meant he was moving to College Station. We learned Reeve’ll be traveling a lot — A&M has far-flung campuses — but he’ll continue paying rent in Austin, Texas … and sure enough, there it is in his list: “Travis County,” by Gary Clark.

And because life is a journey filled with unexpected and sometimes serendipitous turns — the confluence of Reeve Hamilton and The Texas Tribune as good an example as any — and because we might never would’ve heard this song if Reeve hadn’t turned us on to it — we close with Michael Kiwanuka singing “I’m Getting Ready.” 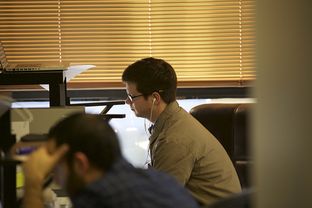