Two-thirds of registered Texas voters have a favorable opinion of the state’s voter photo ID law, and more than half have a “very favorable” view, according to the latest University of Texas/Texas Tribune Poll.

Only 22 percent say they have an unfavorable opinion of that law, which is in use for the current election but being challenged in the courts; a federal judge in Corpus Christi ruled this month that the law is unconstitutional, a finding the state is appealing to a higher court.

The number of registered Texas voters who say the law decreases turnout at the polls is almost double the number who say they have an unfavorable opinion of it. Meanwhile, 43 percent say they do not believe the voter ID law affects turnout at all. 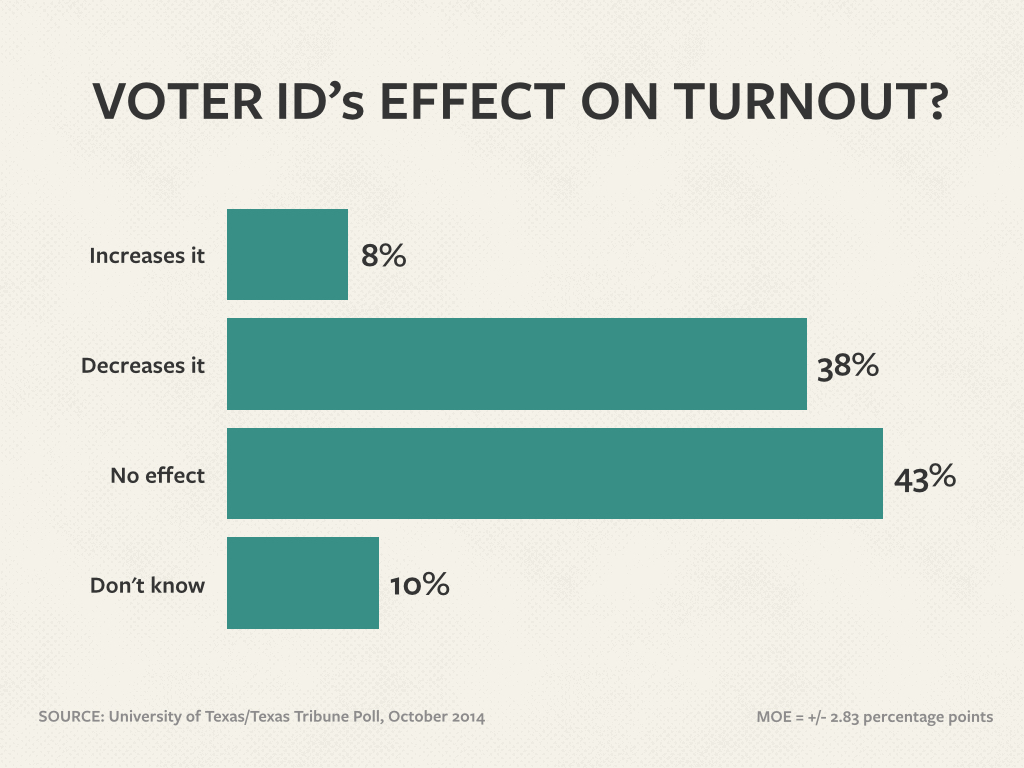 “Voter ID is now seen completely through a partisan lens,” said Jim Henson, co-director of the poll and head of the Texas Politics Project at the University of Texas at Austin. “People then match their expectation of the facts to their predispositions.”

While 19 percent of Democrats have a “very favorable” opinion of the law, 51 percent of independents and 85 percent of Republicans do.

“I think people are overthinking this,” said Daron Shaw, a government professor at UT-Austin and co-director of the poll. “It cuts blacks in half — a core Democratic constituency. And Hispanics are for it. What Republican wouldn’t go for that? It’s just a wedge issue.” 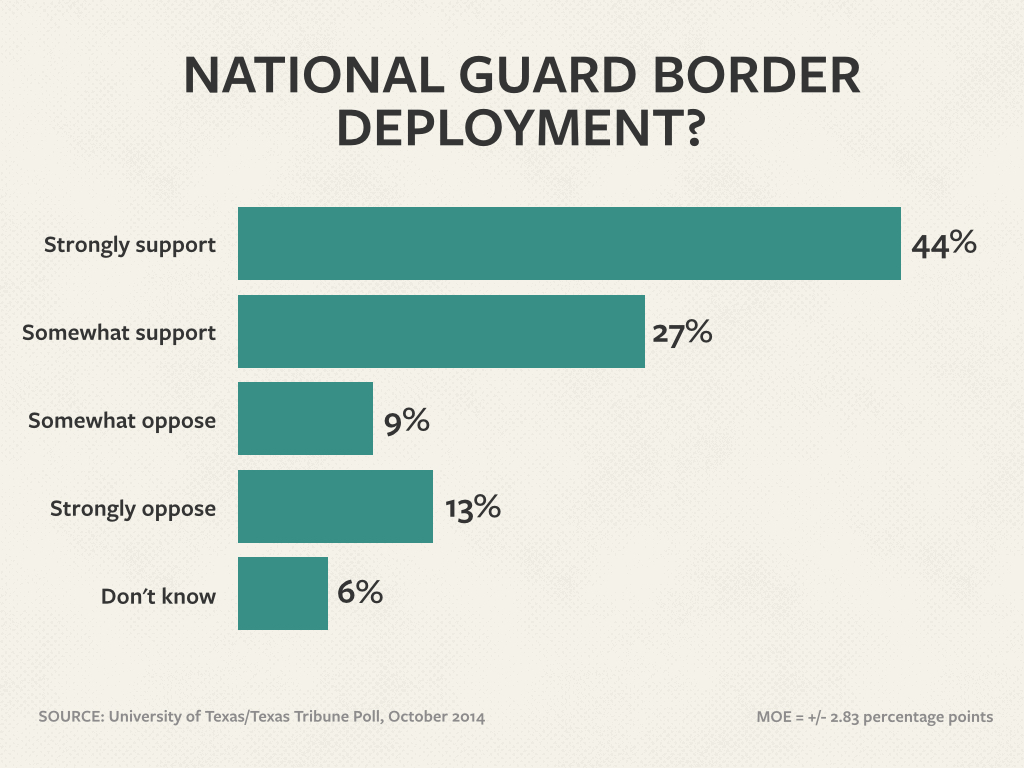 That has a partisan tang to it — Democrats are split about evenly, while 93 percent of Republicans favor the deployment and 74 percent of independents do. That support crosses ethnic lines, too, with 74 percent of Anglos, 65 percent of blacks and 62 percent of Hispanics in favor of sending in the Guard.

“The evidence suggests, with some variation, that people were very inclined to see the deployment as security and restoring order,” Henson said. “By ethnicity, everybody is in favor of it.” 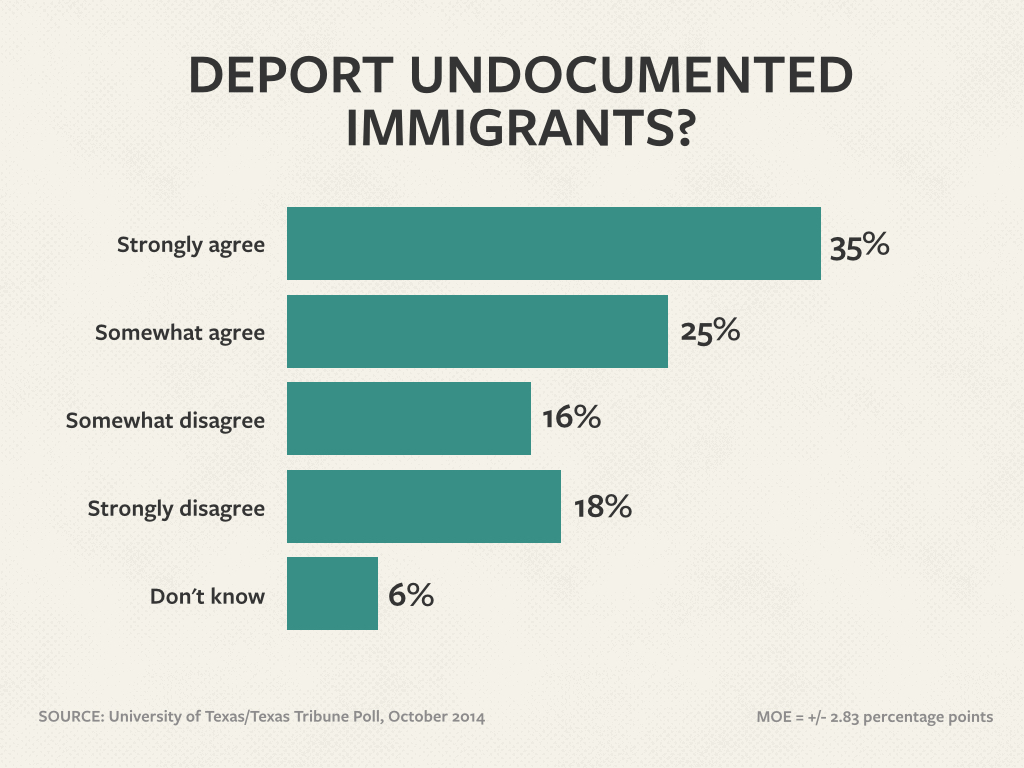 On the immigration side of the immigration/border security divide, 60 percent of Texans agree that undocumented immigrants living in the U.S. should be immediately deported. And 52 percent say the illegal immigrants who have lived in the state for at least a year and graduated from Texas high schools should pay higher, out-of-state tuition rates. 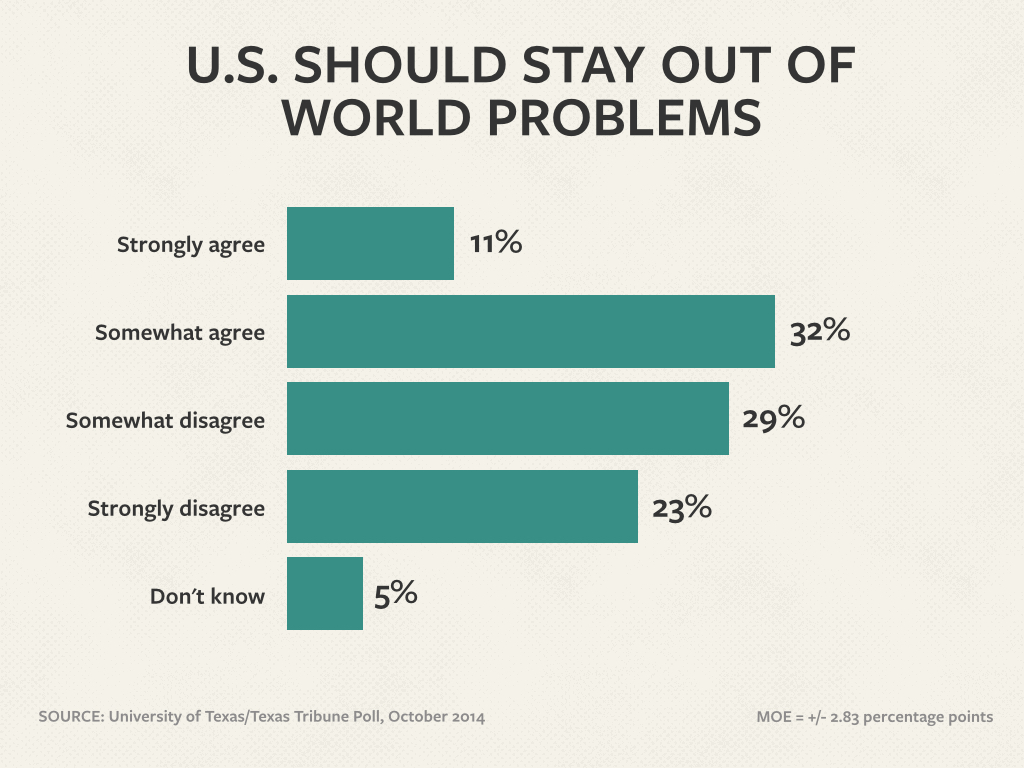 Slightly more than half of registered voters disagree with the statement that “this country would be better off if we just stayed home and did not concern ourselves with problems in other parts of the world.” But 43 percent agree.

Conservatives were more likely to disagree — to say the country should intervene elsewhere — but some fault lines with the party emerge, with 27 percent of those who identify themselves with the Tea Party strongly disagreeing, compared with 41 percent of Republicans who don’t identify as Tea Party voters.

Forty-two percent say Gov. Rick Perry is innocent of the crimes he was accused of committing in indictments issued earlier this year, while 31 percent say he’s guilty and 22 percent say it is too soon to tell. 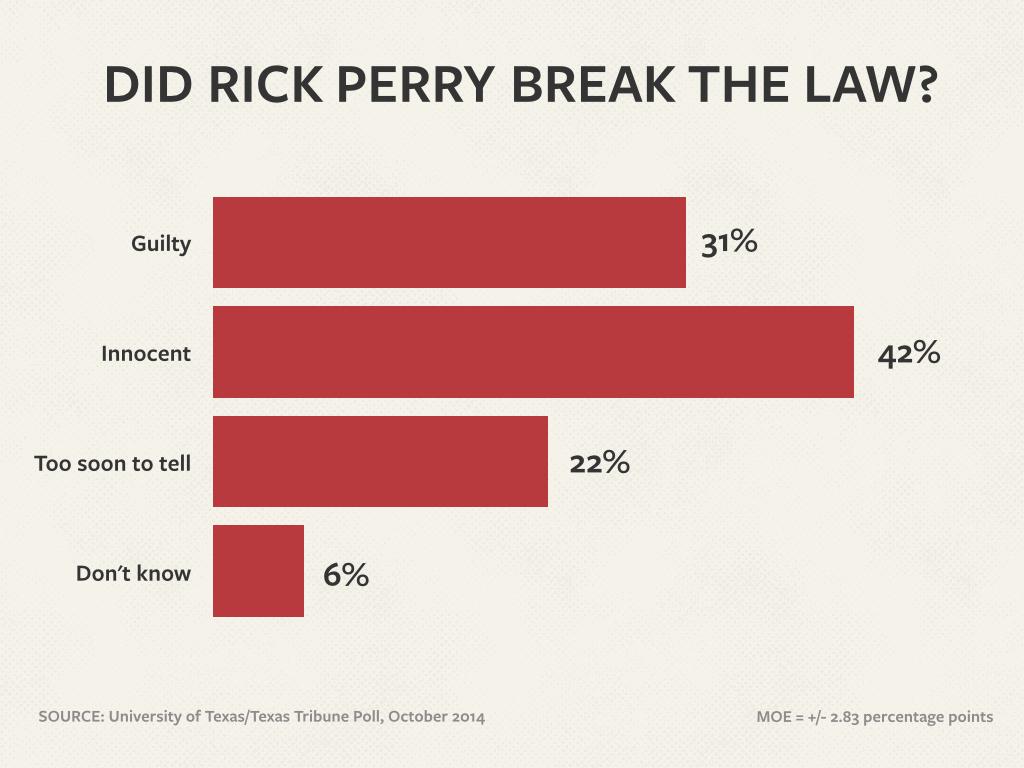 “Partisanship really helps you sort out your facts when it comes to corruption,” Henson said. “There are not a whole lot of people who want to say he is guilty.”

“This wasn’t just ‘Some governor got indicted,’” Shaw said. “It was drunkenness and partisan infighting and a district attorney and public integrity and all of that, lots of elements of intrigue, components of a reality TV program.”

The Tea Party continues to account for slightly more than half of the state’s Republicans. Asked whether they would vote for a Democrat or a Republican in a race for Congress, likely voters split 53 percent to 40 percent in favor of the Republicans. 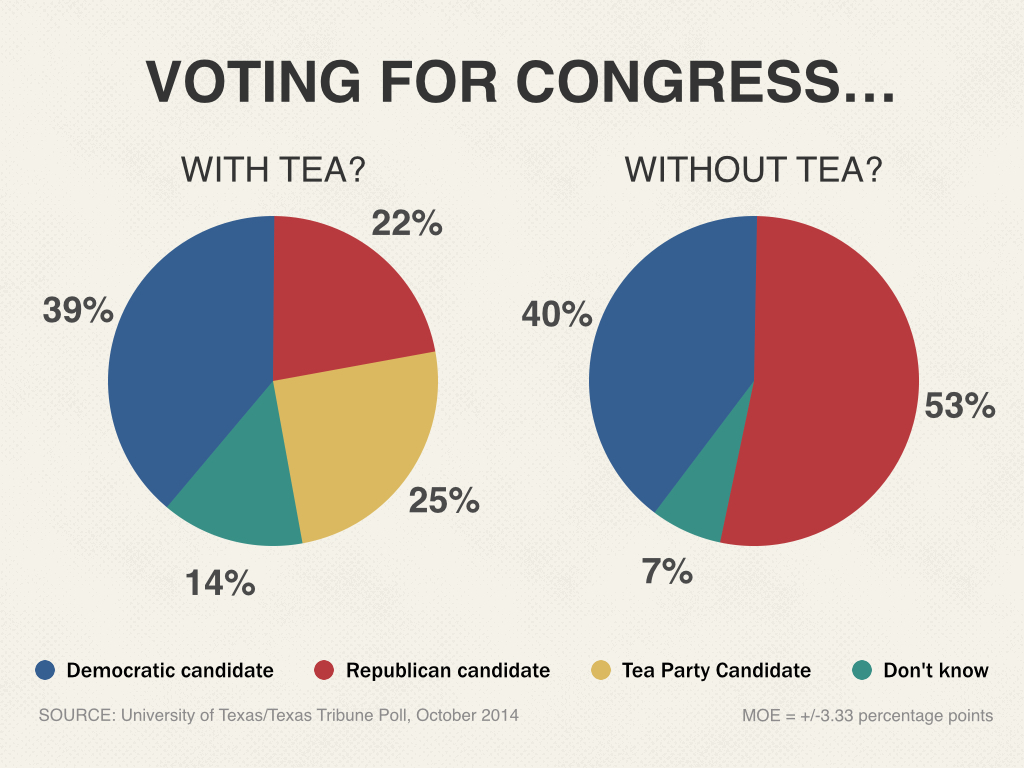 “It’s a little factoid that makes you go ‘hmm.’ It’s also a decent marker for ideological tensions within the GOP,” Shaw said. “I’m amazed at how well it has been absorbed into the Republican Party. Maybe we have underrated the party’s ability to handle these movements. They have made institutional changes to make it easy to co-opt this movement. If they had refused to accommodate them, maybe it fades away, maybe it becomes a challenge.”

Asked a “Goldilocks” question about the Tea Party, 32 percent of voters say it has too much influence, 28 percent say it has too little and one in five say it’s just right.

The University of Texas/Texas Tribune internet survey of 1,200 registered voters was conducted from Oct. 10 to Oct. 19 and has an overall margin of error of +/- 2.83 percentage points. Among 866 likely voters, the margin of error is +/- 3.33 percent. Numbers in the charts might not add up to 100 percent because of rounding.

This is one of several stories on the latest University of Texas/Texas Tribune Poll. Thursday: Texans’ views on the governor’s race. Friday: Texans on the 2016 presidential primaries. Monday: Transportation and the economy. Tomorrow: Texas voters on social issues.