Republican Greg Abbott has a 16-point lead over Democrat Wendy Davis in the closing days of this year’s general election for governor, according to the latest University of Texas/Texas Tribune Poll.

“The drama of the outcome is not who wins, but what the margin will be,” said Jim Henson, co-director of the poll and head of the Texas Politics Project at the University of Texas at Austin. “Wendy Davis has not led in a single poll in this race.”

Abbott leads among likely voters who dropped out of high school all the way up to those with post-graduate degrees. Davis leads with voters who said they never attend church services, but Abbott leads with every group that did, no matter how frequently or infrequently. With Anglo voters, he holds a 62 percent to 31 percent advantage. Davis leads 75 to 19 among black voters and narrowly — 48 to 46 — among Hispanic voters.

“It should be a really interesting, contentious race,” said Daron Shaw, a government professor at UT-Austin and co-director of the poll. “And yet, it doesn’t seem to have penetrated the public consciousness. Certainly, nothing down-ballot has.”

Most of the statewide races are not as close as this one, the poll found — and Republican candidates hold the lead in each one. 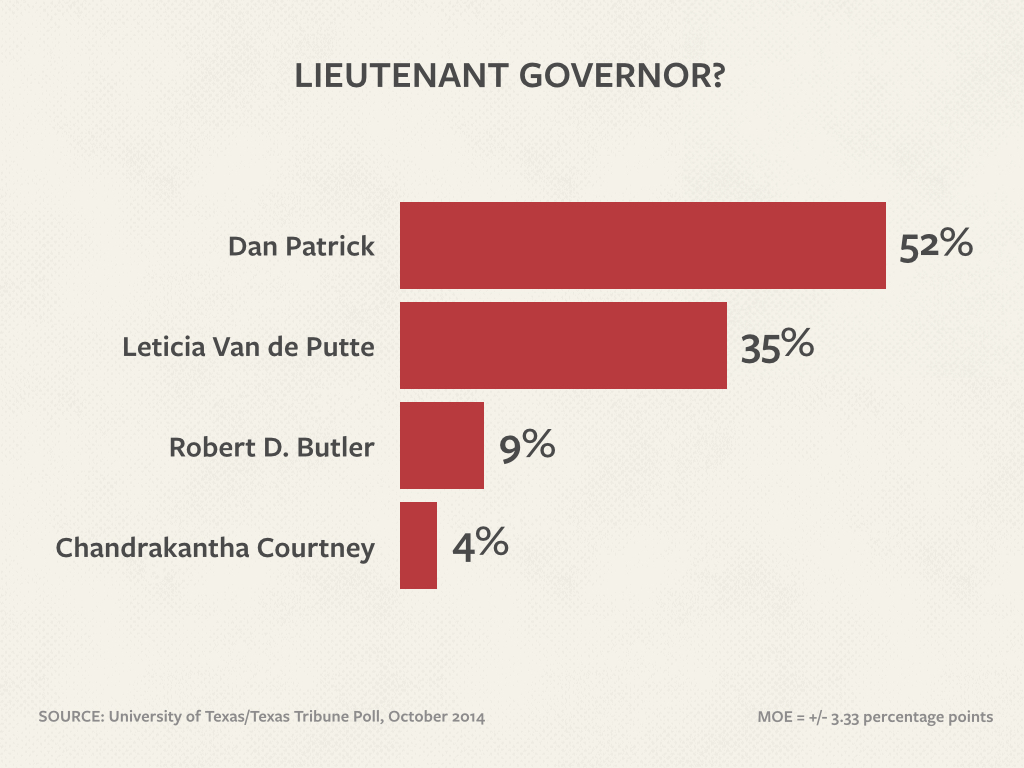 • Republican Dan Patrick has a comfortable 52 percent to 35 percent lead over Democrat Leticia Van de Putte in the race for lieutenant governor. The third-party candidates Robert D. Butler, a Libertarian, and Chandrakantha Courtney, a Green, have 9 percent and 4 percent, respectively. 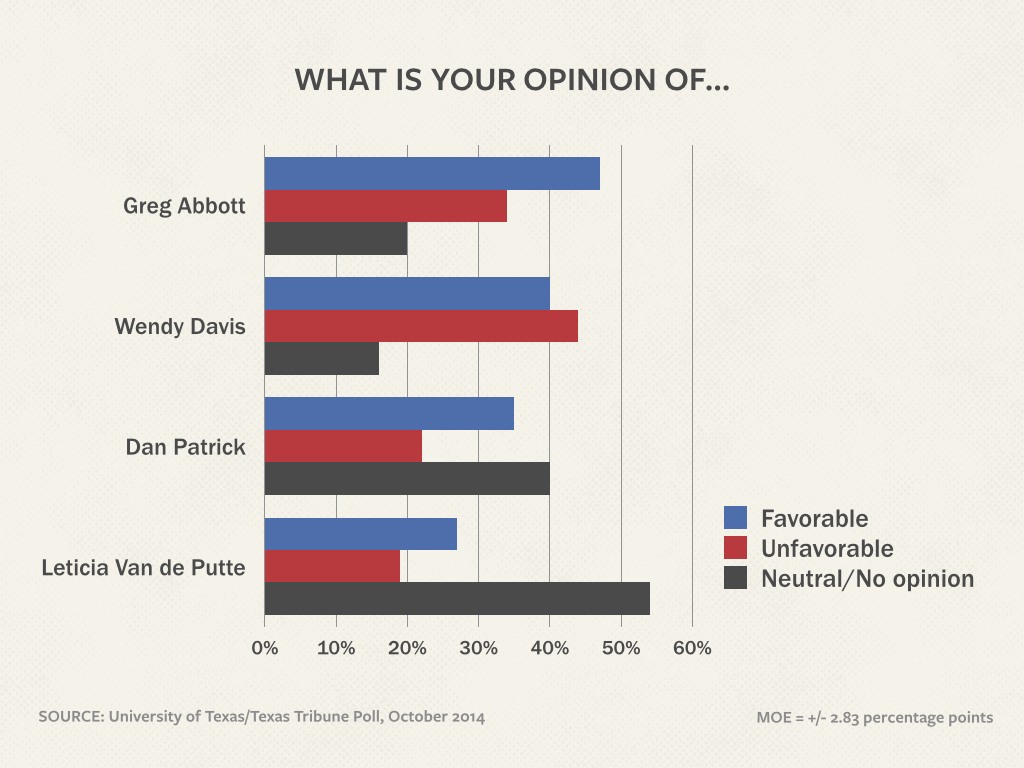 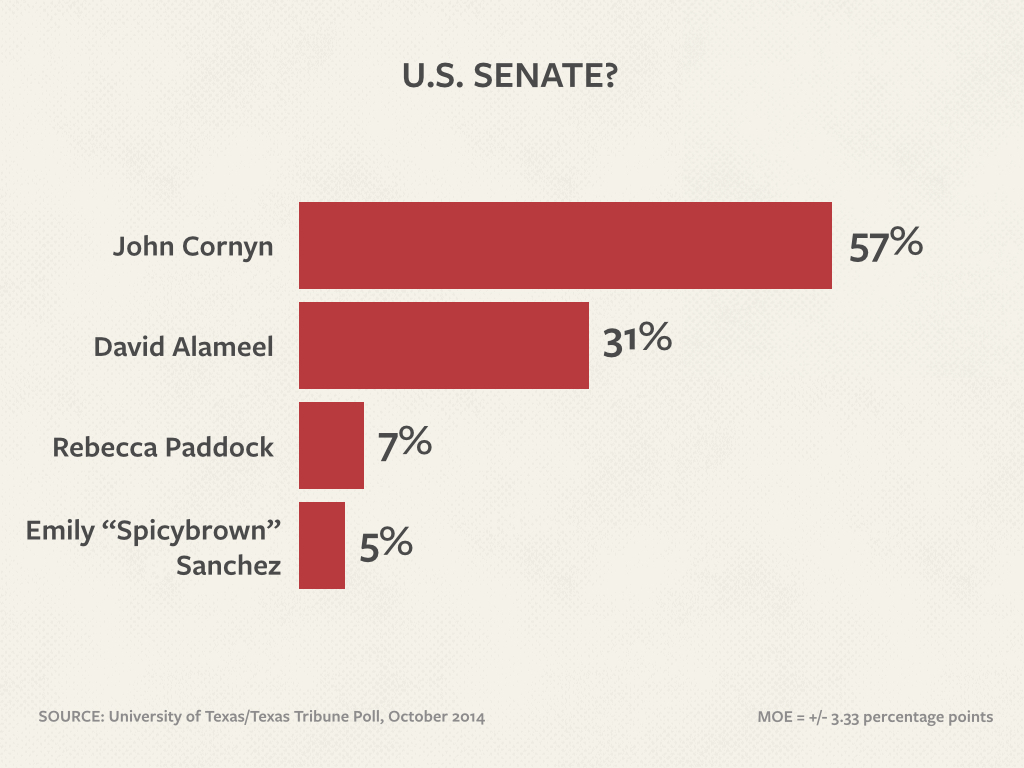 • U.S. Sen. John Cornyn, a Republican seeking re-election, polled well ahead of his opponents, with 57 percent saying they will support him. Democrat David Alameel has the support of 31 percent of the respondents, followed by Rebecca Paddock, a Libertarian, at 7 percent, and Emily “Spicybrown” Sanchez from the Green Party at 5 percent. 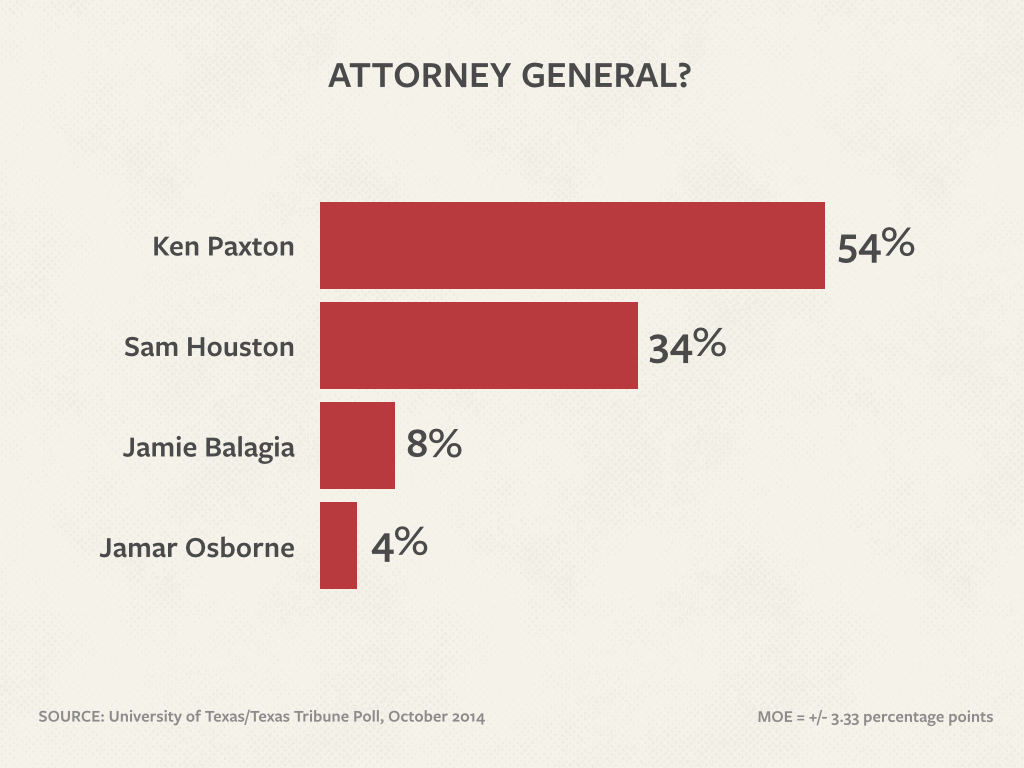 • State Sen. Glenn Hegar, a Republican, is 15 percentage points ahead of Democrat Mike Collier, a Houston accountant, in the race for comptroller. Hegar has 49 percent to Collier’s 34 percent. Ben Sanders, a Libertarian, has 11 percent, and Deb Shafto of the Green Party has 6 percent.

• George P. Bush, whose famous political name scared other Republicans out of the primary for land commissioner, holds an 18 percentage point lead over Democrat John Cook, a former El Paso mayor, in that race. He has 50 percent and Cook had 32 percent, followed by Justin Knight, a Libertarian, at 10 percent, and Valerie Alessi, a Green, at 7 percent. 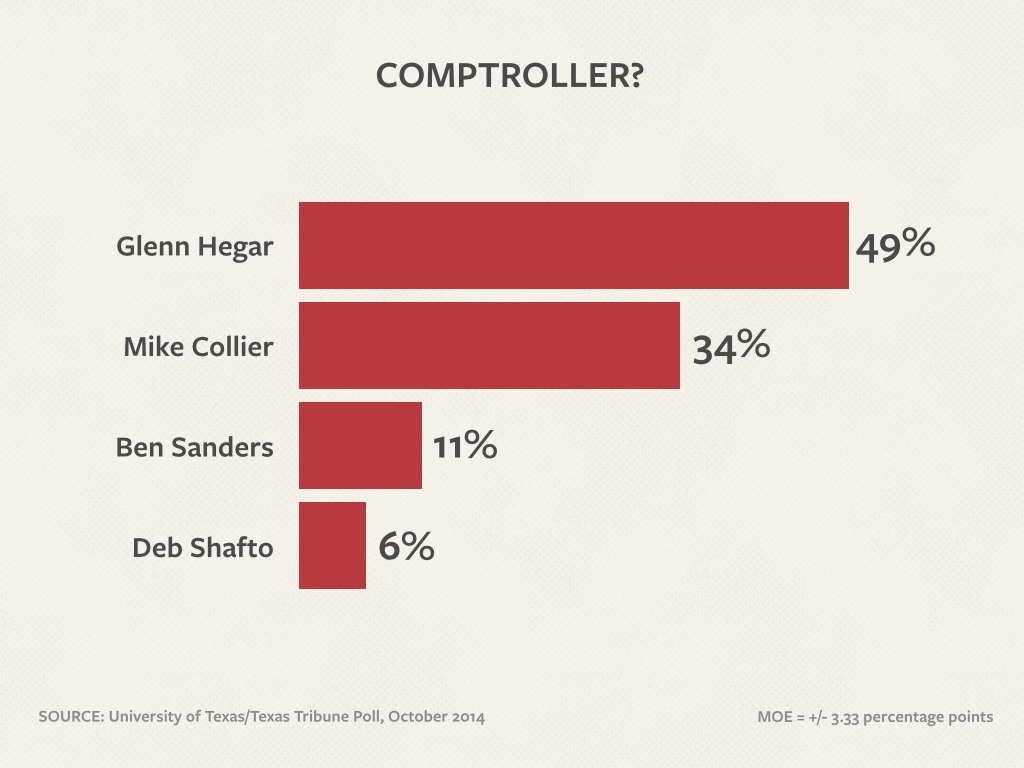 • The contest for agriculture commissioner almost sounds close by comparison, with Republican Sid Miller, a state representative, at 47 percent, and Democrat Jim Hogan, a political newcomer who has not actively campaigned, at 35 percent. David “Rocky” Palmquist, a Libertarian, and Kenneth Kendrick from the Green Party each got 9 percent of the respondents.

• With 48 percent, Republican Ryan Sitton leads the pack in the race for an open seat on the Texas Railroad Commission, followed by Democrat Steve Brown at 34 percent, Libertarian Mark Miller at 10 percent and Green Martina Salinas at 9 percent.

The UT/TT Poll has minor-party candidates polling stronger than expected across the board, but such candidates often fare better in hypothetical matchups than they actually perform on Election Day, Henson said.

"Voters who are considering a vote for a third party are willing to express this interest in response to poll questions, but often much less willing to actually voter for third-party candidates once they are in the voting booth," he said. "We saw this in 2010, when Libertarian candidates polled at levels similar to those in this most recent UT/Trib poll, then performed 5 to 6 percentage points below their poll numbers just a few weeks later."

The University of Texas/Texas Tribune internet survey of 1,200 registered voters was conducted from Oct. 10 to Oct. 19 and has an overall margin of error of +/- 2.83 percentage points. Among likely voters in the head-to-head political races, the margin of error is +/- 3.33 percent. Numbers in the charts might not add up to 100 percent because of rounding.

This is the first of several stories on the latest University of Texas/Texas Tribune Poll. Tomorrow: Texans’ views on national races.