After what are shaping up to be easy primary wins in March for the leading gubernatorial candidates, Republican Greg Abbott starts the general election race for governor with an 11-point lead over Democrat Wendy Davis, according to the latest University of Texas/Texas Tribune Poll.

Meanwhile, several statewide races on the Republican primary ballot — for lieutenant governor, attorney general and comptroller — appear headed for May runoffs. None of the leaders in those races looks close to the 50 percent support they would need to win next month's primary outright.

In the governor’s race, Abbott would beat Davis 47 percent to 36 percent in a general election held today, with 17 percent of registered voters saying they have not made up their minds about which candidate to support, according to the poll.

“We’ve been talking since the beginning of this race about whether anything would be different, and we’re not seeing anything that’s different,” said Jim Henson, co-director of the poll and head of the Texas Politics Project at the University of Texas at Austin. “There was some talk about how Davis had done better in our last poll, and that was partially an artifact of her rise in the fall, and we’re seeing something of a reassertion of the normal pattern.”

In the October survey, Davis’ announcement and sudden political celebrity cut the Republican's lead over her to 6 percentage points. Now, the distance between the two has widened a bit.

Before they get to the general election, each faces a primary election. On the Republican side, the poll found Abbott well ahead of his rivals, with 90 percent support among likely Republican voters, followed by Miriam Martinez at 5 percent, Lisa Fritsch at 4 percent and Larry Secede Kilgore at 1 percent. Davis leads Ray Madrigal 87 percent to 13 percent among likely Democratic voters. 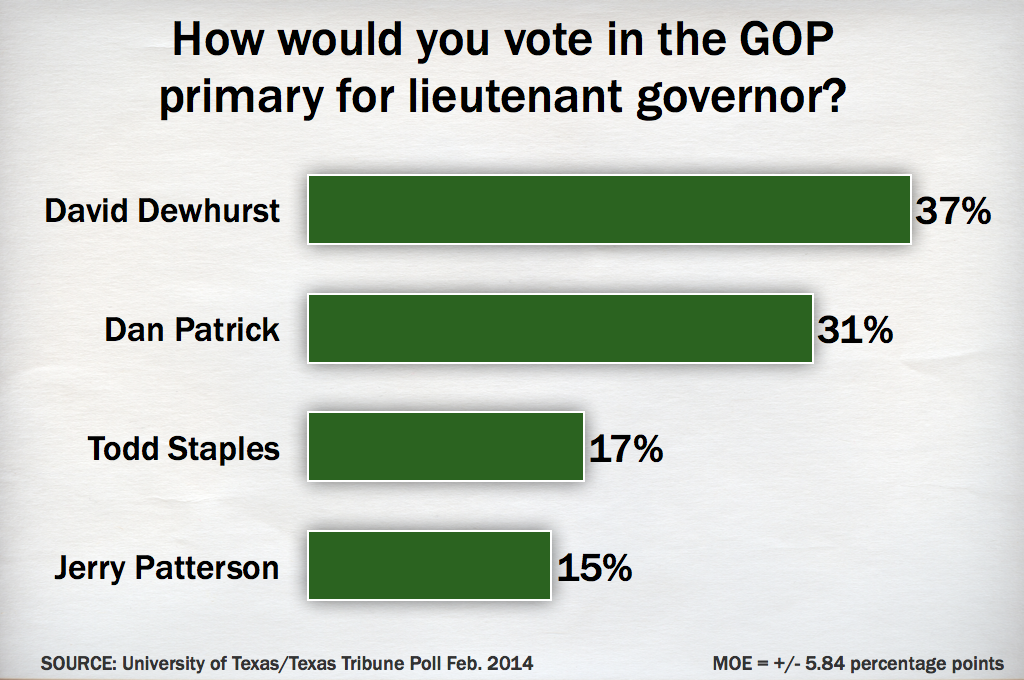 “Each of them has run a conservative — that’s a small C — risk-averse campaign,” Shaw said. “I get that, but I think two of them are going to really regret it.”

U.S. Sen. John Cornyn, facing a field of seven other Republican primary candidates in his bid for re-election, won the support of 62 percent of the likely Republican primary voters, followed by U.S. Rep. Steve Stockman, R-Friendswood, who got 16 percent. Support for the rest was in single digits: Linda Vega, 7 percent; Dwayne Stovall and Ken Cope, 4 percent each; Reid Reasor and Chris Mapp, 3 percent each; and Curt Cleaver, 1 percent. 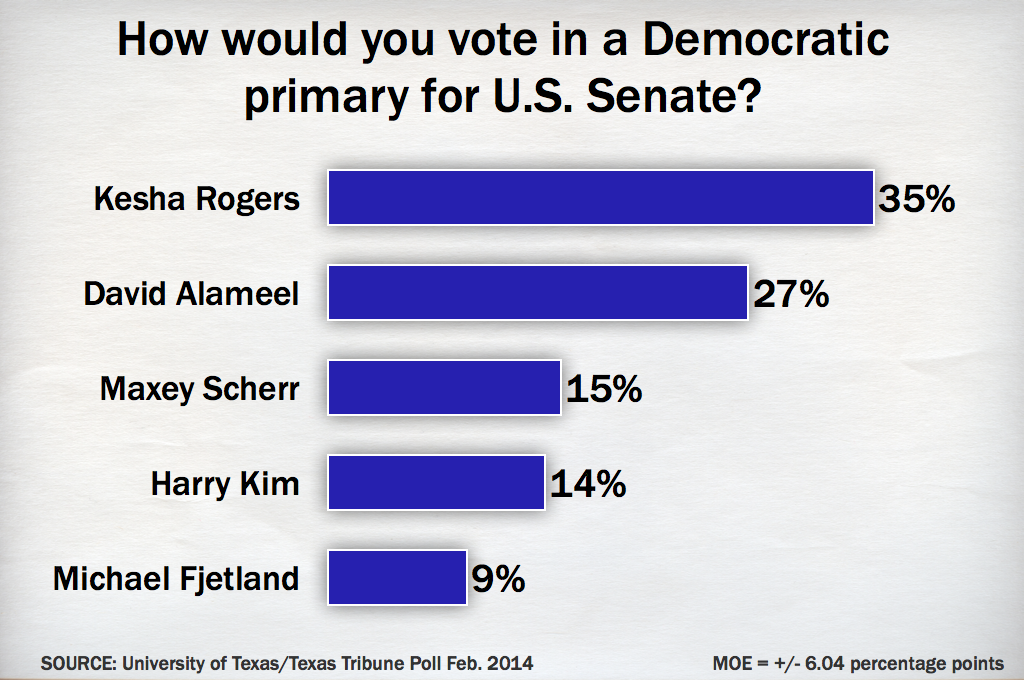 In the Democratic primary, the candidate who has been on the ballot the most times, Kesha Rogers, leads the best-financed candidate, David Alameel, 35 percent to 27 percent. Maxey Scherr had 15 percent, followed by Harry Kim at 14 percent and Michael Fjetland at 9 percent. Voters are largely unfamiliar with those candidates; 74 percent initially expressed no opinion before being asked how they would vote if they had to decide now.

“This is what it looks like when you have a bunch of candidates, no infrastructure and no money,” Henson said. “The first person to raise some money and run some ads could really move this.” 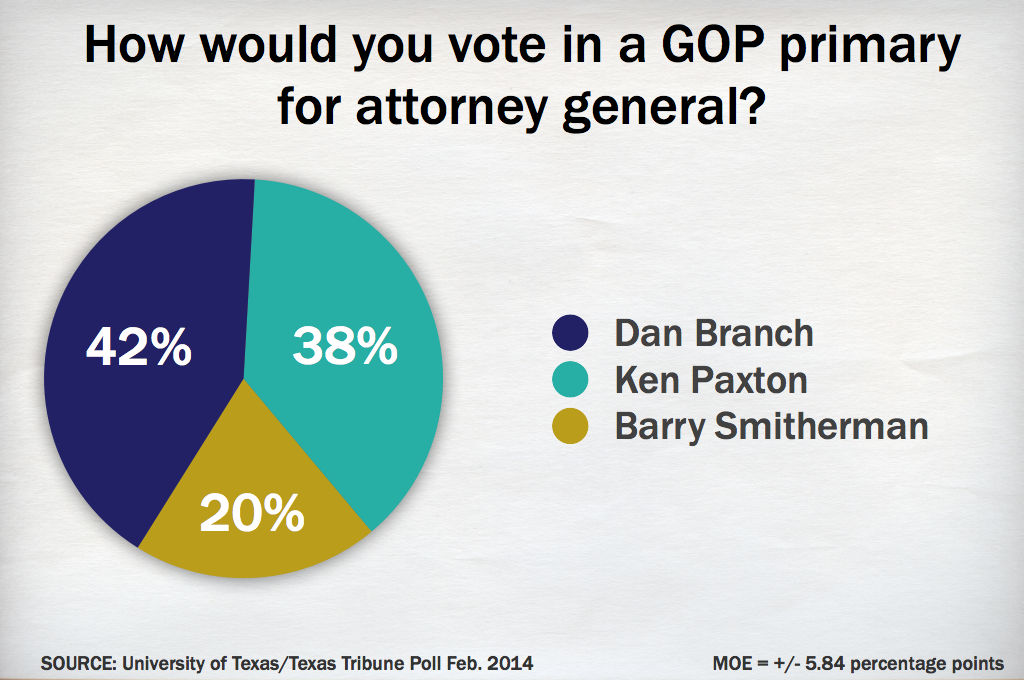 High numbers of initially undecided voters were evident in races for attorney general and comptroller as well. “Once you get to these down-ballot races, you can expect things to be more volatile,” Henson said.

The Republican primary for attorney general is a statistical dead heat between state Rep. Dan Branch of Dallas, at 42 percent, and state Sen. Ken Paxton of McKinney, at 38 percent — a difference smaller than the poll’s margin of error. Railroad Commissioner Barry Smitherman got 20 percent. When they were initially asked about the race, 47 percent expressed no preference between the candidates. 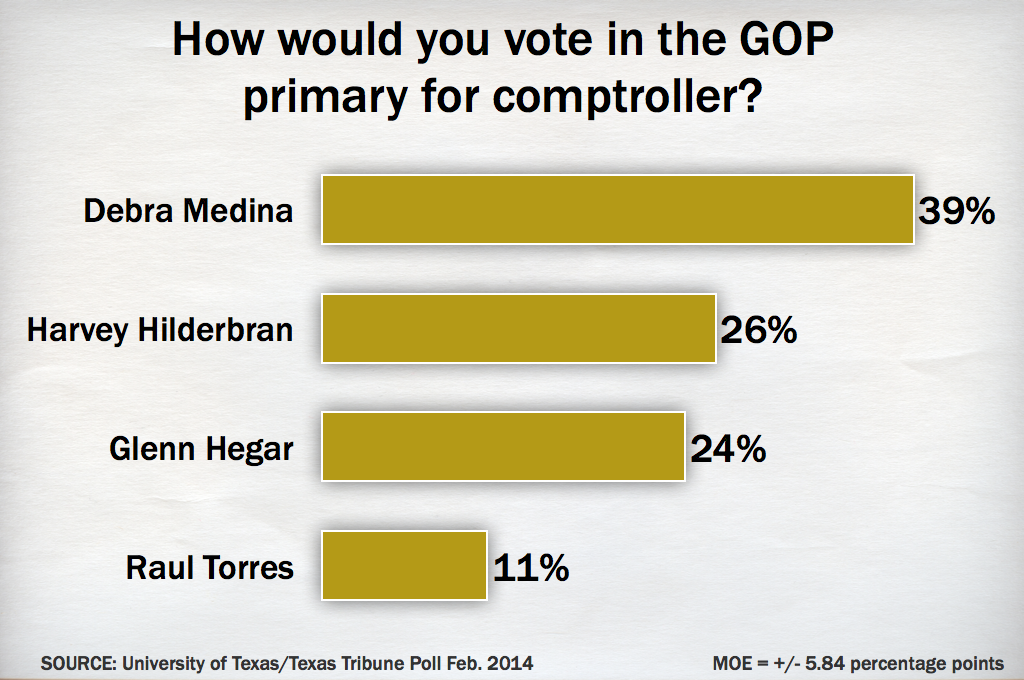 In the race for comptroller, that group of initially undecided voters accounted for 54 percent, perhaps an indication of continuing flux in the race. Debra Medina, the only candidate who has been on a statewide ballot (she ran for governor in 2010), got 39 percent after voters were asked whom they would support in an election now, followed by state Rep. Harvey Hilderbran, R-Kerrville, at 26 percent; state Sen. Glenn Hegar, R-Katy, at 24 percent; and former state Rep. Raul Torres, R-Corpus Christi, at 11 percent.

U.S. Sen. Ted Cruz of Texas is the most popular Republican candidate for president among Texas Republicans right now, winning 28 percent of the votes in a hypothetical primary. Gov. Rick Perry and U.S. Sen. Rand Paul of Kentucky were next at 10 percent each, followed by U.S. Rep. Paul Ryan of Wisconsin and former Florida Gov. Jeb Bush at 8 percent each; Louisiana Gov. Bobby Jindal, U.S. Sen. Marco Rubio of Florida and Wisconsin Gov. Scott Walker at 6 percent; and New Jersey Gov. Chris Christie and former U.S. Sen. Rick Santorum of Pennsylvania at 4 percent. Another 12 percent said they haven’t decided whom they would support. 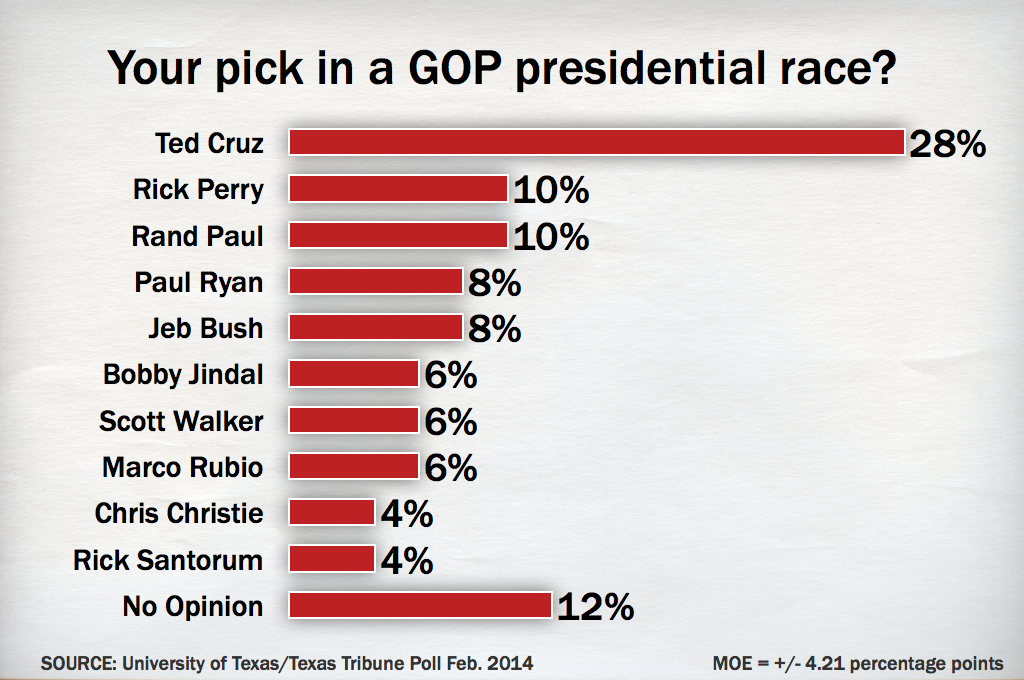 They appear to be evenly matched in terms of whether voters know who they are. “Abbott is not Perry, and he’s not Bush,” Shaw said. “Democrats up to now have been dealing with huge name ID deficits. That’s not true for Davis and Abbott. He’s not one of the 800-pound gorillas of state politics.”

This is the first of several stories on the latest University of Texas/Texas Tribune Poll. Tomorrow: Texans’ views on various proposals for public education.