Attorney General Greg Abbott, the leading candidate for the Republican nomination for Texas governor, holds a single-digit lead over the likely Democratic nominee, state Sen. Wendy Davis of Fort Worth, according to the latest University of Texas/Texas Tribune Poll.

In a head-to-head race, Abbott got 40 percent of registered voters to Davis’ 34 percent, with 25 percent of the voters undecided. In a three-way general election, he would get 40 percent, Davis would get 35 percent and Libertarian Kathie Glass would get 5 percent.

“What you’ve got is a race in which, for the first time in a long time, the Democrat is as well-known as the Republican at the outset of the race,” said poll co-director Daron Shaw, a professor of government at the University of Texas at Austin. 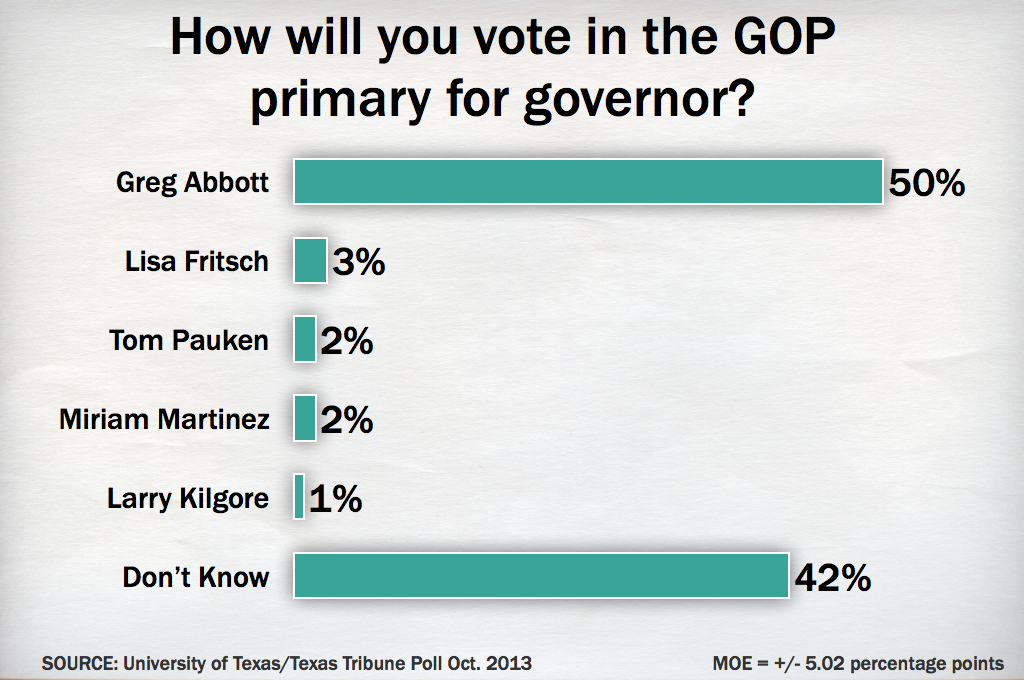 “These numbers are not evidence that the underlying fundamentals are changing in Texas,” said Jim Henson, who co-directs the poll and heads the Texas Politics Project at UT-Austin. “We have not seen a big change in party identification, and we don’t see any large-scale shifts in the underlying attitudes that are forming.”

Davis is the only Democrat in the race right now, but Abbott faces a five-candidate Republican primary. According to the poll, he would win that primary race handily: Half of the Republicans polled said they would vote for Abbott. His opponents — Lisa Fritsch, Tom Pauken, Miriam Martinez and Larry Kilgore — combined for only 8 percent, while 42 percent said they haven’t decided how they would vote in the GOP primary. 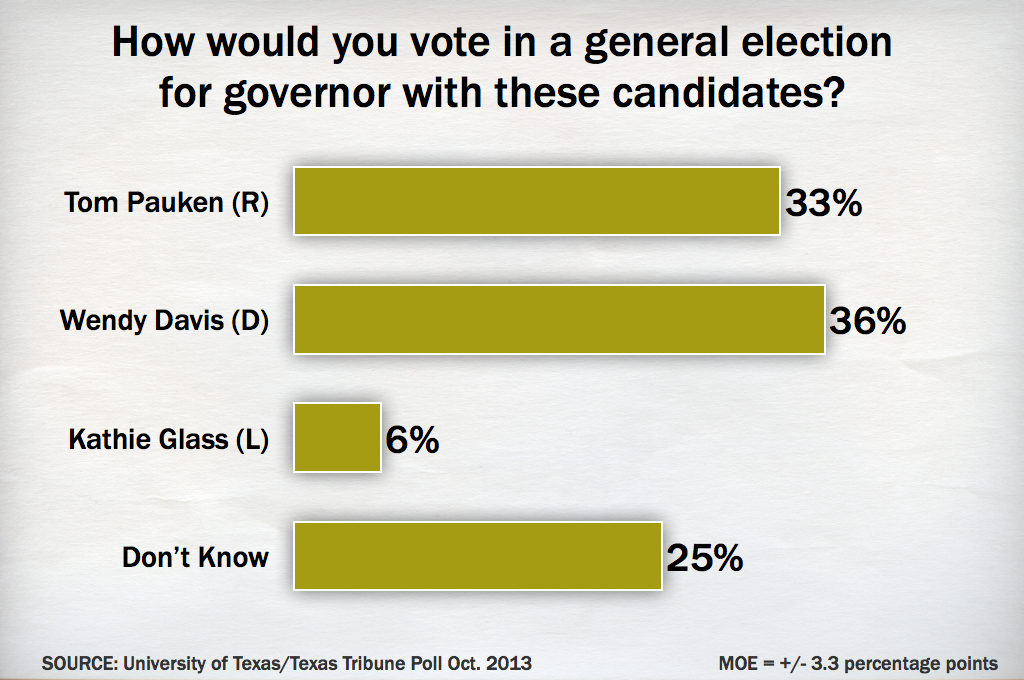 “I’m a little surprised that Pauken is so nowhere,” Shaw said. “I thought he would be the main challenger, and he may well be, but there’s nothing in the data to suggest that.”

“We’re so used to see the Republican gubernatorial candidate running from a position of incumbency,” Henson said. “Greg Abbott, while well-known, is not a household name. At least the race starts that way. That was evident before the rise of Wendy Davis, and it’s a stark contrast now that she has become so well-known in the wake of the filibuster.

“This far out, there is always an element of these results that is about name recognition,” he said. 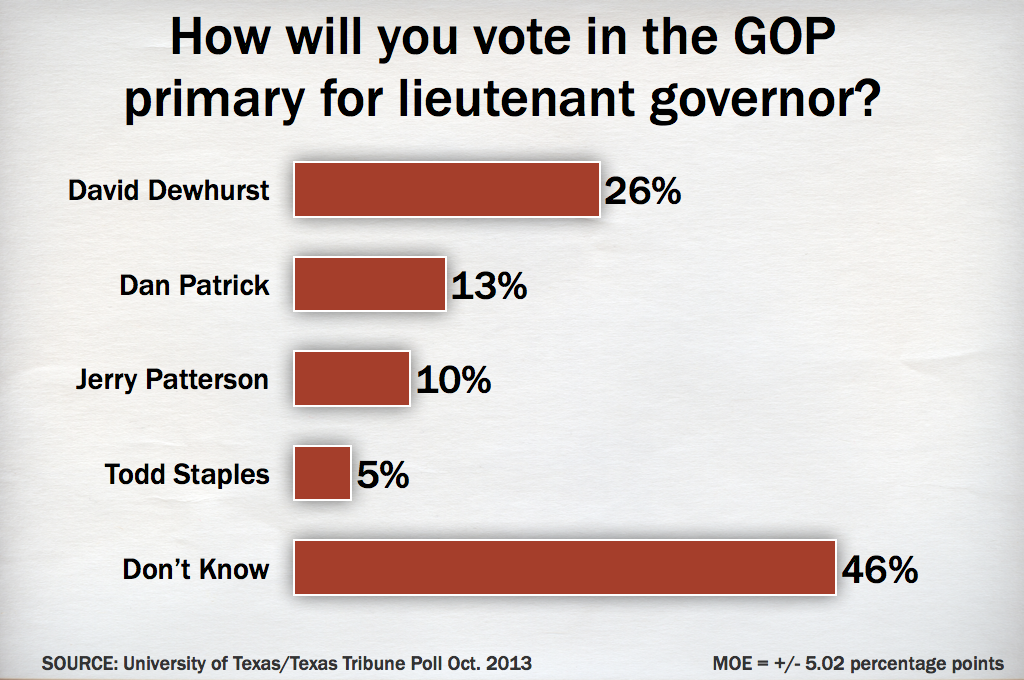 In the second state race on the GOP primary ballot — for lieutenant governor — the UT/TT Poll found incumbent David Dewhurst in front, with 26 percent, but his rivals for the position combined for an anti-incumbent vote of 28 percent. State Sen. Dan Patrick had 13 percent, Land Commissioner Jerry Patterson had 10 percent and Agriculture Commissioner Todd Staples had 5 percent.

“Dewhurst has had a good month or so, and the others have not been able to get a lot of traction,” Shaw said. “A four-way race is a complicated thing. A candidate has to say, ‘Do I want to go after Dewhurst, which benefits the other two and hurts me because I went negative?’ Nobody really wants to do the dirty work of going after him, because they’ll get the damage of going negative.”

Fewer Democratic candidates have announced plans to run for state office, and there were no Democratic primary contests to poll.

In other 2014 statewide races:

• Nearly half of the Republican haven’t made up their minds in the primary for U.S. Senate. Incumbent John Cornyn got 39 percent, and two of his declared rivals — Dwayne Stovall and Erick Wyatt — combined to get 13 percent of the respondents. Linda Vega, who is also seeking the GOP nomination, entered the race after the poll was under way.

Voters’ favorable impressions of Cornyn have slipped since June, dropping to 25 percent from 31 percent. The percentage with an unfavorable view, now at 30 percent, remained about the same, but a greater number of voters took a neutral position on that question.

• Undecided was the big winner in the Republican primary contest for comptroller of public accounts, too, with 75 percent. Debra Medina, the only candidate in the race who has run statewide before, got 14 percent, followed by former state Rep. Raul Torres of Corpus Christi at 5 percent, state Sen. Glenn Hegar of Katy at 4 percent and state Rep. Harvey Hilderbran of Kerrville at 2 percent.

This is one of six stories on the latest University of Texas/Texas Tribune Poll. Tomorrow: Ted Cruz and the 2016 presidential race.