U.S. Sen. Ted Cruz remains the star of the Texas Republican Party, leading the pack in the GOP’s 2016 presidential sweepstakes in Texas and maintaining high rankings from conservative voters even after the federal government shutdown, according to the new University of Texas/Texas Tribune Poll.

The senator’s widely publicized actions leading up to the congressional gridlock over health care and the early October shutdown of the federal government preceded the poll, which went into the field the day after federal government operations resumed. Compared with the UT/TT Poll last June, Cruz is better known among fans and foes alike. 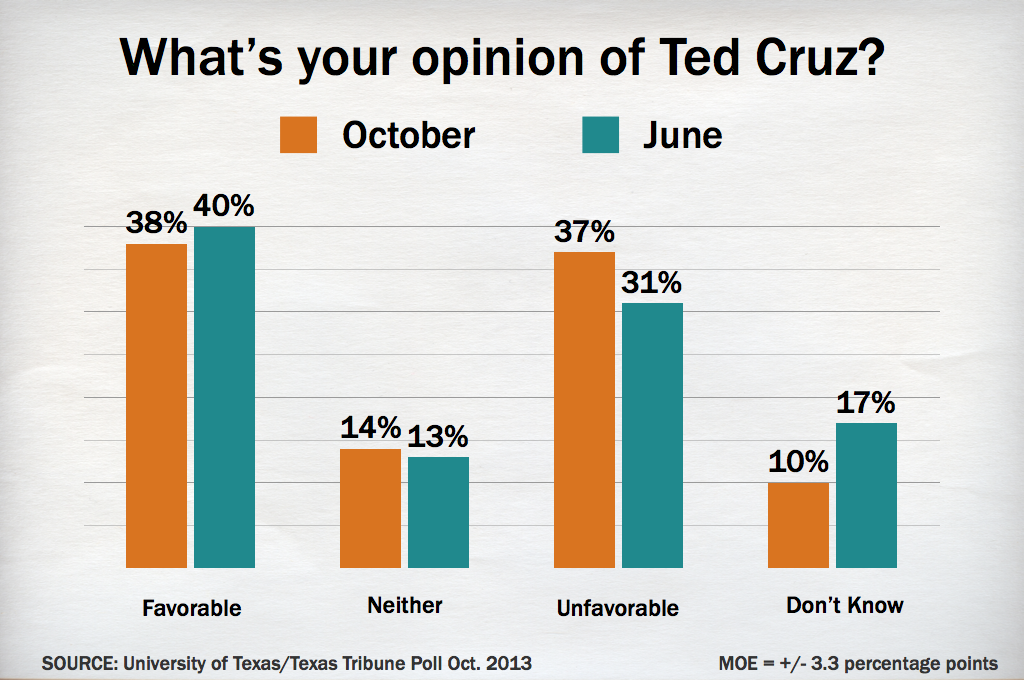 But the real story is in the underlying numbers: Democrats don’t seem to like Cruz, Republicans like him a lot and those who identify themselves as Tea Party voters love him.

“He is far and away the center of gravity among Republican Party officials in Texas right now,” said Jim Henson, co-director of the UT/TT Poll and head of the Texas Politics Project at the University of Texas at Austin. “He is very secure in the Republican Party right now, in terms of both favorability and name recognition. He is where it’s at.”

Among Democrats, Cruz’s favorable/unfavorable ratings were 9 percent to 75 percent. But among Republicans, that flipped, 52 percent favorable to 19 percent unfavorable, and among Tea Party voters, his numbers were 92 percent to 2 percent. And among those Tea Party identifiers, 72 percent have “very favorable” opinions of Cruz. On the other end, 70 percent of Democrats chose “very unfavorable.” Those who identified as Republicans when given a choice between that and Tea Party were less fervent: 22 percent gave Cruz “very favorable” ratings, while 30 percent said their opinion was “somewhat favorable.”

“It’s Democrats who have realized who Ted Cruz is, and they hate him,” said Daron Shaw, a government professor at UT-Austin and co-director of the poll. 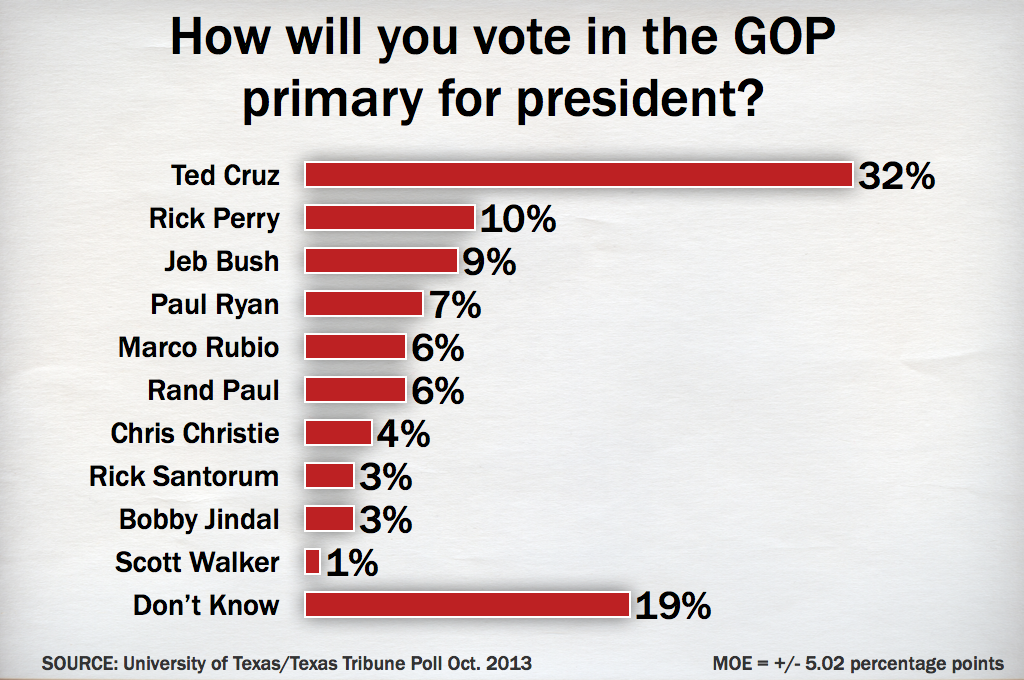 On a hypothetical Republican presidential primary ballot, Cruz was the first choice of 32 percent of self-identified Texas Republicans, followed by Gov. Rick Perry at 10 percent. Cruz led the poll in June, too, with 25 percent, and Perry had 10 percent in that survey, too. But Perry was second this time, and fourth last time; Rand Paul and Marco Rubio’s numbers have fallen among Texas Republicans as Cruz’s have risen.

“Cruz’s stance on the budget, on the government shutdown, does not seem to have hurt him among Texas Republican primary voters,” Shaw said. “He seems to have distinguished himself from other Republican Tea Party darlings. Cruz has branded himself.”

The other Republicans on the presidential list pulled single digits, including Jeb Bush at 9 percent, Paul Ryan at 7 percent, Rubio and Paul at 6 percent each, and Chris Christie at 4 percent. Rick Santorum and Bobby Jindal each got 3 percent, and Scott Walker was last at 1 percent; 19 percent of those Republicans said they had not formed an opinion.

“There is very little cause for caution or for moderation here, especially if you look at the fact he increased by 7 [points], Perry held, and Paul and Rubio fell behind,” Henson said of Cruz. “The presidential heat shows you the latest snapshot of the establishment-versus-conservative fight in Texas in the Republican Party.” 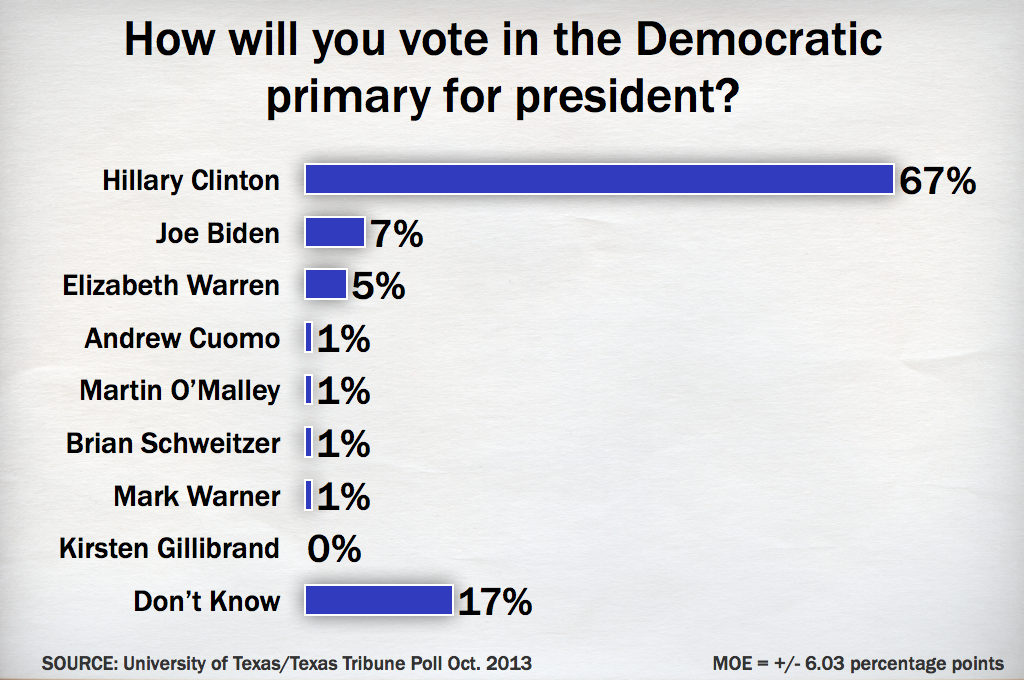 On the Democratic ballot, Hillary Clinton is a pre-emptive favorite, with 67 percent of the Democrats choosing her over seven other candidates. Joe Biden was next, at 7 percent, followed by Elizabeth Warren at 5 percent. Andrew Cuomo, Martin O’Malley, Brian Schweitzer and Mark Warner each got 1 percent, and Kirsten Gillibrand came in at zero. The remaining 17 percent were undecided.

Voters were also asked to grade several public officials on the job they’re doing. President Obama got approving marks from 37 percent, but 54 percent said they disapprove of the job he’s doing, including 46 percent who “disapprove strongly.”

Texas government looks rosy next to that.

The Texas Legislature got approving nods from 31 percent, while 39 percent disapprove and 24 percent were neutral.

This is one of six stories on the latest University of Texas/Texas Tribune Poll. Yesterday: the 2014 races for governor and other offices. Tomorrow: the mood of the state, and Texans’ views on the Affordable Care Act.