U.S. Sen. Ted Cruz starts as the Texas favorite in a fantasy 2016 Republican primary for president, swamping Gov. Rick Perry and a number of other big-name candidates in the latest University of Texas/Texas Tribune Poll.

The governor fared better in a potential head-to-head matchup for re-election in 2014 against Attorney General Greg Abbott, who got less than half the support Perry got from self-identified Republican primary voters.

Cruz, virtually unknown just 18 months ago as he began his long-shot bid for the Senate, had two and a half times more support than the governor, whose national popularity peaked and then plummeted during his bid for president in the 2012 elections.

“What you’re seeing here with the Cruz number is that he has become the pre-eminent rising conservative in Texas,” said poll co-director Jim Henson, who runs the Texas Politics Project at the University of Texas at Austin. “What we’re witnessing in the numbers is Cruz running ahead and reaching back for the baton, and Rick Perry has the baton. The only question is whether Rick Perry is ready to hand it to him.”

A quarter of those polled chose Cruz, who was followed by U.S. Sens. Rand Paul of Kentucky, at 13 percent, and Marco Rubio of Florida, at 11 percent. Perry was next at 10 percent, followed by New Jersey Gov. Chris Christie and U.S. Rep. and 2012 GOP vice presidential candidate Paul Ryan of Wisconsin, who were tied at 8 percent. Former U.S. Sen. Rick Santorum of Pennsylvania and Louisiana Gov. Bobby Jindal each won the support of 2 percent.

“Rand Paul and Ted Cruz present some problems for the Democrats,” said Daron Shaw, co-director of the poll and a government professor at UT-Austin. “The prototypical Tea Party candidate is seen as a little crazy, a little zealous, a little leave-them-alone-and-they’ll-blow-up. But you can’t dismiss these guys as being dumb or being uninformed or not being able to put some thoughts together. The Democrats and a lot of people in the media have a hard time believing that smart people can actually hold these positions, and they don’t know what to make of them.” 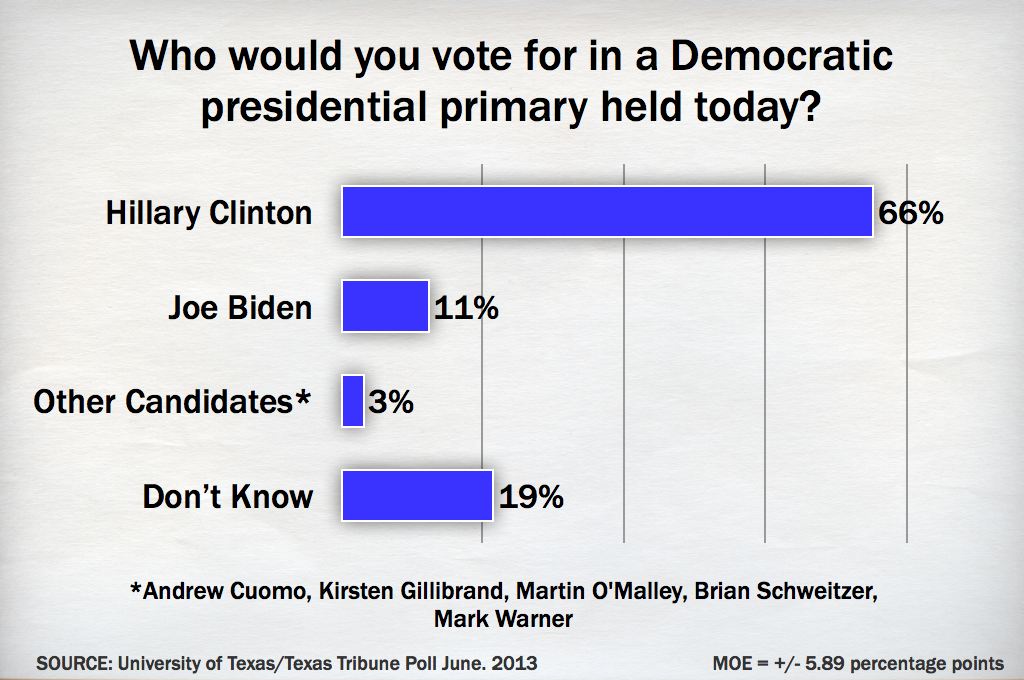 About a fifth of those polled in the two primaries said they haven’t thought enough about the next presidential race to have an opinion.

The governor’s re-election numbers are healthier than his presidential prospects in Texas, according to the poll. 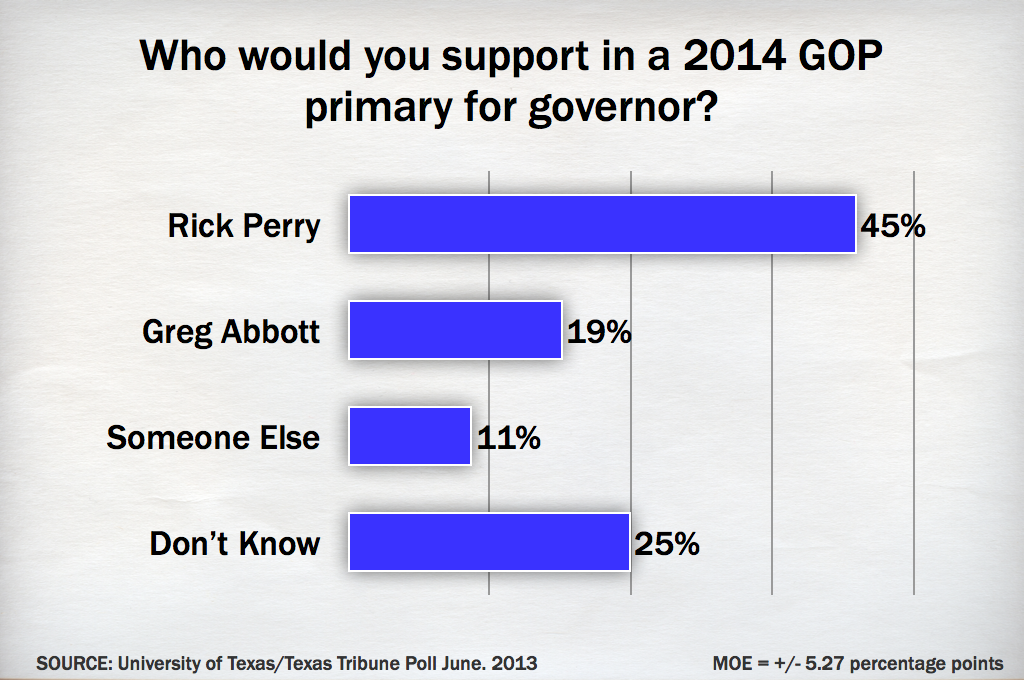 But Perry is far ahead of his likeliest challenger with Republican voters in the poll. In a fantasy match against Abbott, who has been preparing for a gubernatorial bid while he and everyone else waits for Perry to announce his own plan, the governor got 45 percent to Abbott’s 19 percent in the poll. Another 11 percent said they would choose someone else, and 25 percent said they haven’t given it enough thought to form an opinion. Those numbers haven’t changed much since the February UT/TT Poll, which found Perry with 49 percent to Abbott’s 17 percent.

Most Republicans in the poll think Texas is on the right track, and that group overwhelmingly chose Perry over Abbott. The attorney general did better with those who think the state is going in the wrong direction, but still favored Perry over Abbott. That last group, however, was as likely to choose “someone else” as they were to choose the governor.

Henson said Perry’s pre-2014 standing is much different from his pre-2010 standing and his position going into the presidential bid two years ago. Then, there were few ready or willing to challenge his pre-eminence in the Texas GOP.

“As we go into the 2014 cycle, you have both the track record of the presidential run, which is clearly negative, and you’ve got Ted Cruz very much on the stage and as a viable figurehead for the party, and you’ve got Greg Abbott waiting in the wings,” Henson said. 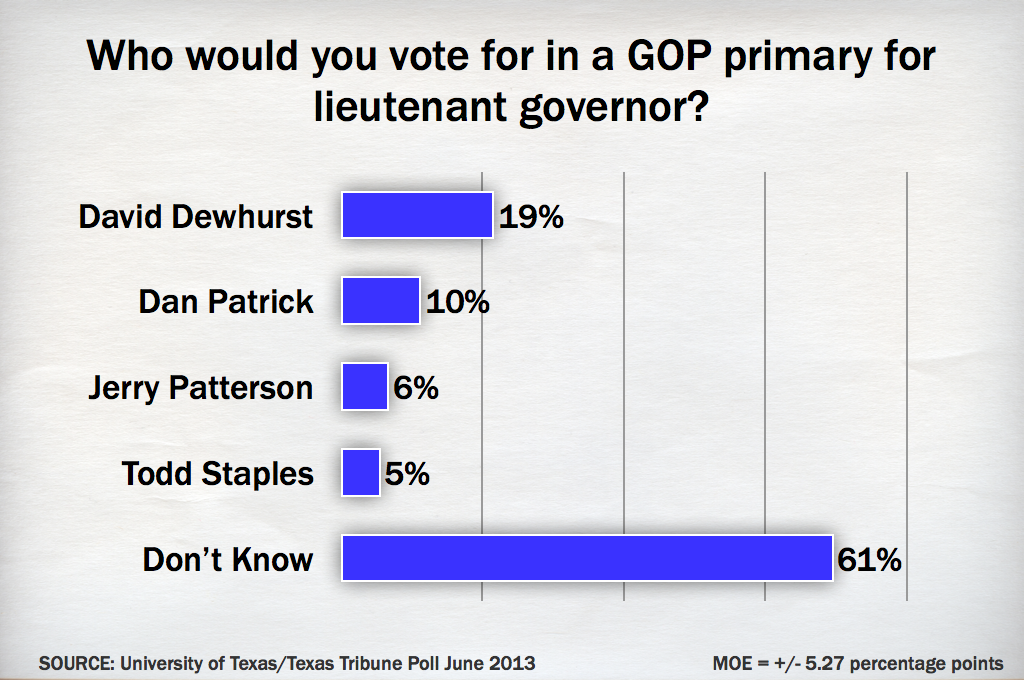 Most Republican voters — 61 percent — haven’t given much thought to next year’s race for lieutenant governor, even though one of the contestants has held that office for more than a decade. The incumbent, David Dewhurst, who lost to Cruz in the 2012 Republican U.S. Senate primary, has the support of 19 percent of the Republican primary voters in the poll. He is followed by state Sen. Dan Patrick, R-Houston, with 10 percent. Two other statewide officials bring up the rear, with Land Commissioner Jerry Patterson the favorite of 6 percent of respondents and Agriculture Commissioner Todd Staples garnering 5 percent. Both Patterson and Staples are former state senators.

“It’s very difficult to estimate where Dewhurst stands right now,” Henson said. “David Dewhurst still has essentially all of the advantages he had against Ted Cruz that at the starting blocks made him the odds-on favorite last year: He has statewide name recognition, he has run a lot of campaigns and he has a big financial advantage. It’s too close to hyperbole to call it an open race. On the other hand, you’ve seen him not able to cash in all of those advantages before.”

Shaw said the Perry and Dewhurst numbers have everything to do with their last appearances before the voters.

"This is what happens when you lose to another candidate," he said. "The fact that you lost hugely colors people’s views of your desirability as a candidate. I go back to Ted Kennedy’s line that his toughest race was in 1982, after he lost the presidential primary, because he was no longer undefeated.

"You have these two characters who are still major players, but they’re no longer unbeatable goliaths," Shaw said. "Both of them still have some work to do because they were beaten in their last elections."

The University of Texas/Texas Tribune internet survey of 1,200 voters was conducted May 31-Jun. 9, 2013, and has a margin of error of +/- 2.83 percentage points. Numbers in the charts might not add up to 100 percent, because of rounding.

This is the first of five stories on the latest University of Texas/Texas Tribune Poll. Tomorrow: what voters think of top political figures and institutions.