Gov. Rick Perry would defeat Attorney General Greg Abbott by a nearly 3-to-1 margin if a Republican gubernatorial primary were held today, according to the latest University of Texas/Texas Tribune Poll.

Such a contest might never come: Neither man has declared for that 2014 race, with each saying he will wait until June or later to make a public announcement of his political plans. Perry recently said they have talked and that Abbott wouldn’t run if the governor sought re-election. But just as the 2010 election year was preceded by speculation of a contest between Perry and Kay Bailey Hutchison, will-they-or-won’t-they talk about Perry and Abbott has become an unavoidable subject in the state’s political parlors.

“There’s a little bit of good news for everybody here,” said Daron Shaw, co-director of the UT/TT Poll and a government professor at the University of Texas at Austin. “For an incumbent who has been in office for a long time and who is coming off a really problematic run for president, these numbers are pretty good.

“Abbott has a lot of room to grow,” Shaw said. “If you look at the people who don’t want to vote for Perry or who want to wait and see, Abbott’s numbers are very high with those people.”

The horse-race numbers cloak some of the underlying strengths and weaknesses of the candidates.

“You can rule out the idea that Perry is just dead,” Shaw said. “You can’t reach that conclusion. But you also can’t say he’s just unbeatable, relative to Abbott.”

Abbott outdid the governor when it came to voters’ impressions of officeholders. Voters were divided in their impressions of Perry, the better known of the two, with 41 percent saying they have a favorable opinion of the governor and 42 percent saying they have an unfavorable opinion. His foes feel fervently about him: 30 percent said they have a “very unfavorable” opinion, while 18 percent registered a “very favorable” opinion. And only 5 percent of the poll respondents said they didn’t have an opinion of the governor.

“A lot of people don’t know who he is, but those who do are overwhelmingly positive,” said Jim Henson, co-director of the survey and head of the Texas Politics Project at UT-Austin. “If you know about Greg Abbott right now and you have an opinion, it’s generally positive. That’s a huge advantage.”

A contest between the governor and the attorney general would probably start with a race between the candidates to describe Abbott to the voters who don’t know him. Perry, meanwhile, could be forced to fend off a challenge of the kind he used to sink Hutchison and that Ted Cruz used to sink David Dewhurst in last year’s GOP primary for U.S. Senate — challenges based in part on long service in government and legislative records not shared by Cruz and Perry, the ultimate winners in those contests.

Still, Perry has been in the top job for a dozen years, and some indicators of his political health are strong.

“He’s still popular among the Republican base. He has high favorables among Republicans,” Henson said. “And the people that like him are still willing to vote for him.”

The New Senator From Texas 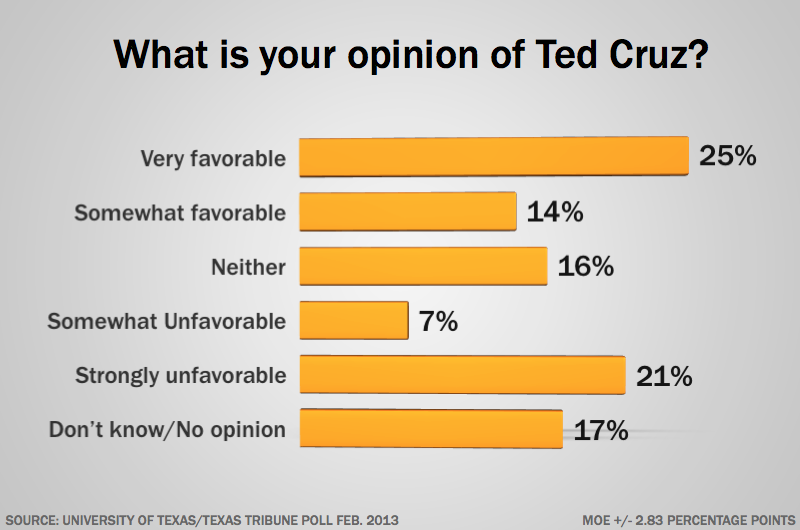 Cruz, in his first two months as a U.S. senator, is more familiar in his home state than Dewhurst, Abbott or John Cornyn, the senior senator from the state. He is viewed favorably by 39 percent and unfavorably by 28 percent, and only 17 percent have no opinion of him.

“Exactly what you would expect for someone who has been high profile and taken strong positions,” Shaw said. “Liberal Democrats have seen him and don’t like him. Conservative Republicans have seen him and like him. This is a decent indication of the spread of partisanship in Texas.

“He’s playing pretty well with the voters he cares about — the conservatives in Texas,” Shaw said. 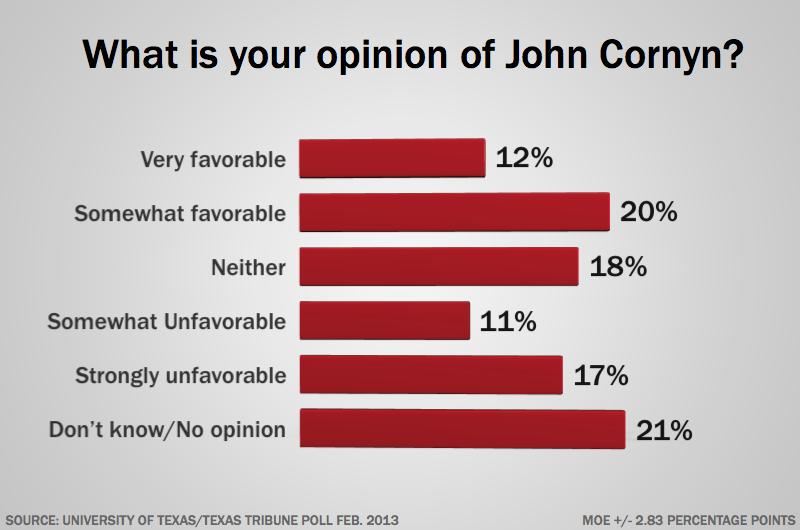 “I think it means his media strategy has been relatively successful, and it’s hard to look at those numbers and not compare them to Dewhurst’s,” Henson said of Cruz. “He has succeeded well in his first days in Washington.” 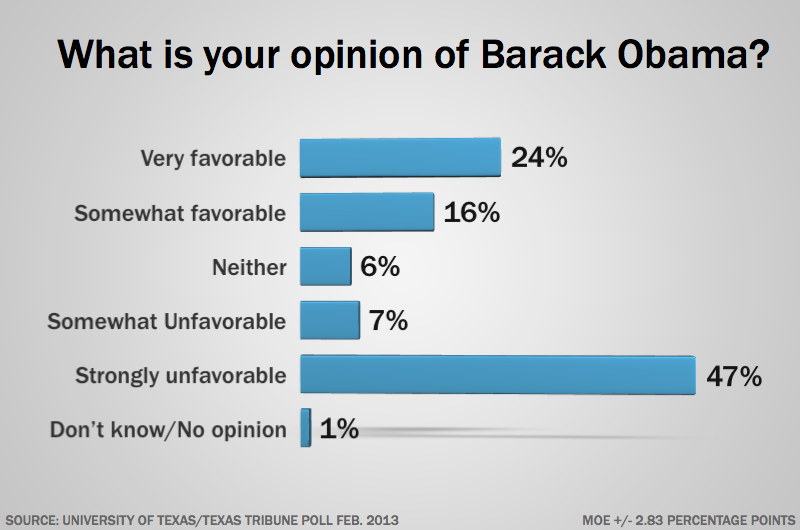 The Tea Party remains slightly more popular than the Republican Party among Texas voters, when they’re asked how they would vote in a congressional election with candidates from the Tea, Republican and Democratic parties. Given that array, 36 percent chose Democratic, 20 percent chose Tea and 17 percent chose the GOP. Those rankings have been relatively stable since the UT/TT poll in February 2011.

This is the first of five stories on the latest University of Texas/Texas Tribune Poll. Tomorrow: guns in Texas.