Freeing Texas from federal oversight of its election laws has the support of a plurality of the state’s voters, according to the University of Texas/Texas Tribune Poll.

The U.S. Supreme Court is considering a challenge to Section 5 of the federal Voting Rights Act, which requires states like Texas — which have a history of discriminating in their voting laws and practices — to get federal approval before making changes to voting and election laws. While 41 percent of Texans think that supervision should continue, 47 percent said the state should be able to change its laws without permission from Washington.

As with many other issues in the poll, this one finds Republicans and Democrat on opposite sides. Democrats strongly favor continued federal supervision. Republicans think it is time to let the state decide its own election laws.

“It’s a question that gets at the heart of civil rights and states' rights,” said Daron Shaw, co-director of the poll and a professor of government at the University of Texas at Austin.

Half of the respondents were asked about Texas. The other half were asked the same question — but generically, without Texas mentioned as one of the affected states. In that second group, 44 percent said states that historically discriminated should be overseen by the federal government, while 40 percent said they should not.

Immigration remains a top priority in Texas, according to voters’ rankings of the most important issues facing the state. Those same voters, however, are open to immigration proposals that have been unpopular in other parts of the country.

"This is another example of the subtlety of opinion on what a lot of people regard as highly polarized or red-meat partisan issues,” Shaw said.

Democrats overwhelmingly favor reforms with a pathway to citizenship — 78 percent said so. Most Republicans — 64 percent — oppose it, including 43 percent who “strongly oppose” the idea. 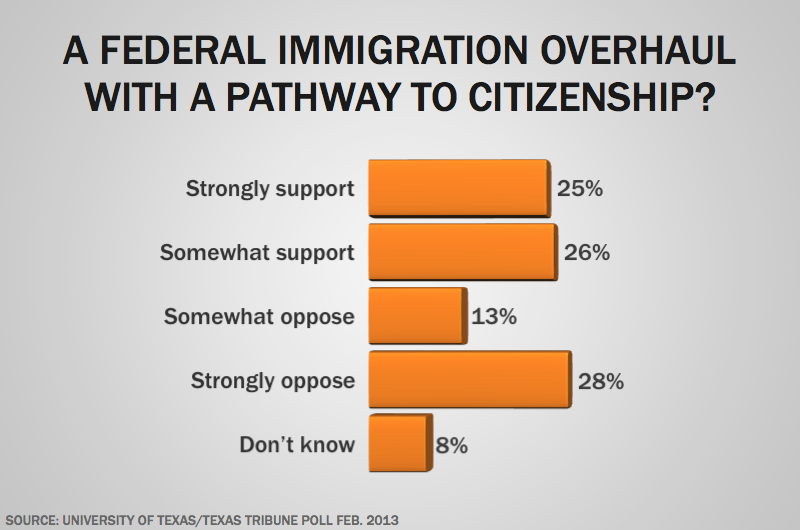 “It is a little less loaded in Texas than other places,” Shaw said of the immigration issue. “The problem is in Republican primaries. The hard-core right has made a big case out of decoupling the immigration reform debate — of insisting on border security before a discussion of pathway to citizenship. In that sense, there is a public relations problem, because what’s come out is that they’re against pathway to citizenship.”

A large majority — 64 percent — support a “guest worker” proposal to allow temporary visas for noncitizens who want to work legally in the U.S. Only 30 percent oppose that idea.

The University of Texas/Texas Tribune internet survey of 1,200 voters was conducted Feb. 14-24, 2013, and has a margin of error of +/- 2.83 percentage points. Numbers in the charts might not add up to 100 percent, due to rounding. Full crosstabs for the survey are attached.

This is the last of five days of stories on the latest University of Texas/Texas Tribune Poll. Yesterday: The mood of the state, and social issues.