Texans generally believe current gun laws are adequate, but they also support criminal and mental background checks before guns are sold, according to the latest University of Texas/Texas Tribune Poll.

“The overall attitudes on guns are about what you would expect in Texas with a couple of exceptions,” said poll co-director Jim Henson, who heads the Texas Politics Project at the University of Texas at Austin. “That is, relatively suspicious of active restrictions and with a bias towards the status quo — in a state where the status quo is a lot less restrictive than in a lot of other places.”

Generally speaking, 44 percent said gun control laws should be stricter, while 36 percent would leave them as they are now and 16 percent would make them less strict. Similarly, 42 percent said stricter gun laws would help prevent gun violence, while 56 percent said stricter laws would make little to no improvement. Democrats were overwhelmingly in favor of stricter gun laws, while Republicans were most likely to say they should be left as is. Women and men were balanced on leaving those laws alone, but 24 percent of men said the laws should be less strict and only 10 percent of women agreed with that. 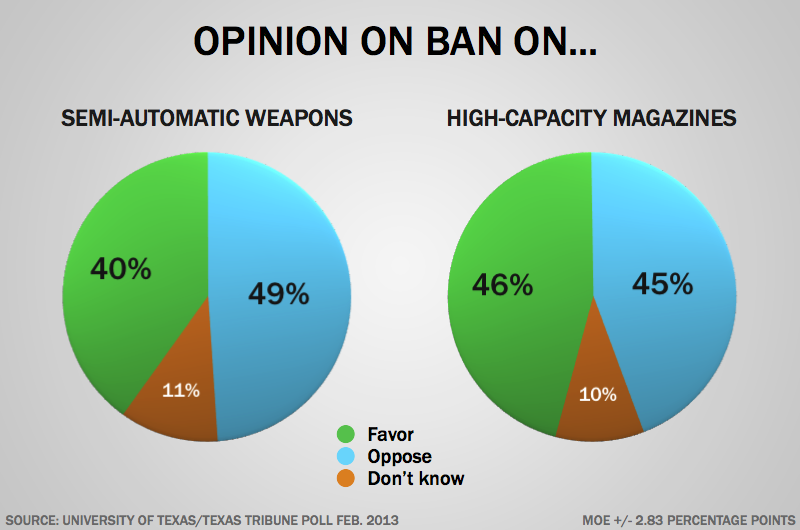 “I would say this is a 52-44 split against gun control,” said Daron Shaw, a government professor at UT-Austin and co-director of the poll. “But that’s 44 percent in Texas saying they would favor stricter gun control. A bunch of people aren’t happy with the restrictions or think we’re fine. All told, it strikes me that a lot of people want more gun control laws in Texas.”

It depends on the proposal. Texans oppose a ban on semi-automatic weapons by a margin of 49 percent to 40 percent. That question also revealed a partisan difference: 92 percent of those who said they would support a separate Tea Party candidate for Congress said they opposed a ban; 67 percent of Republicans agreed with them; 74 percent of Democrats said they were in support of a ban.

Texans are divided on whether there should be a nationwide ban on sales of high-capacity magazines for guns, with 46 percent in favor and 45 percent against. 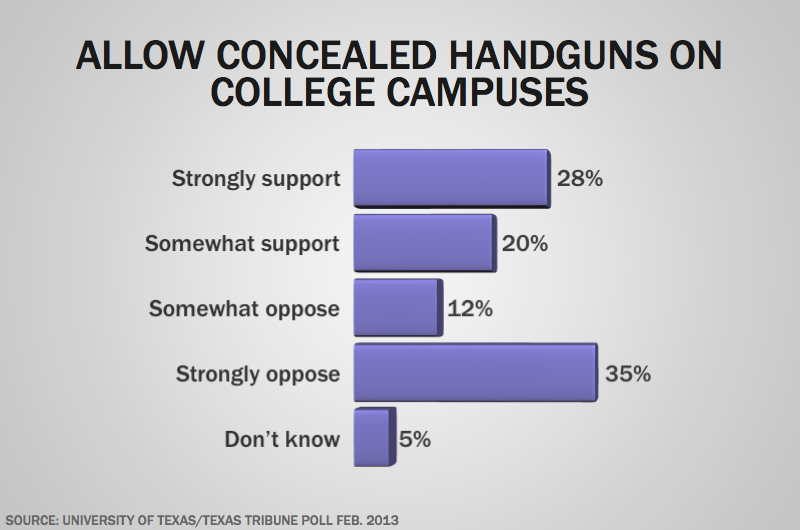 Texans strongly support “requiring criminal and mental background checks on all gun purchases in the United States, including at gun shows and for private sales.” Only 17 percent oppose that requirement, while 78 percent said they support it — including 61 percent who “strongly support” the proposition. Once again, there were ideological differences, but only in degree: Every group, from those who identified themselves as “extremely liberal” to those who called themselves “extremely conservative,” favored the background checks.

Allowing college workers and students to carry guns on campuses divides the state — 48 percent favor that, while 47 percent oppose it (and relatively few, 5 percent, are undecided). 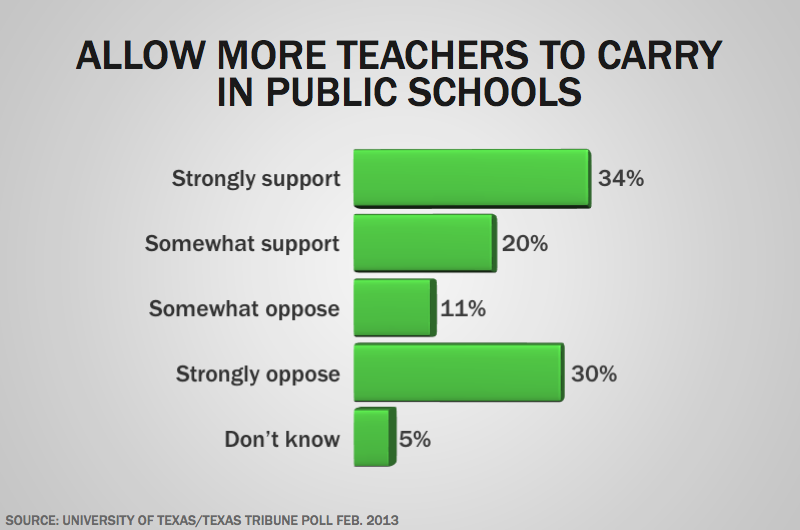 Allowing guns in public schools is more popular. More than half — 54 percent — support that idea while 41 percent oppose it.

“Maybe the presumption is that you’re talking about training requirements and things like that in order to get a license,” Shaw said. “The assumption is that the people who’ll be carrying aren’t just nut jobs like Chevy Chase in Vacation. They are actually people who go through training and gun handling; there’s a comfort with that that you certainly don’t see nationally.” 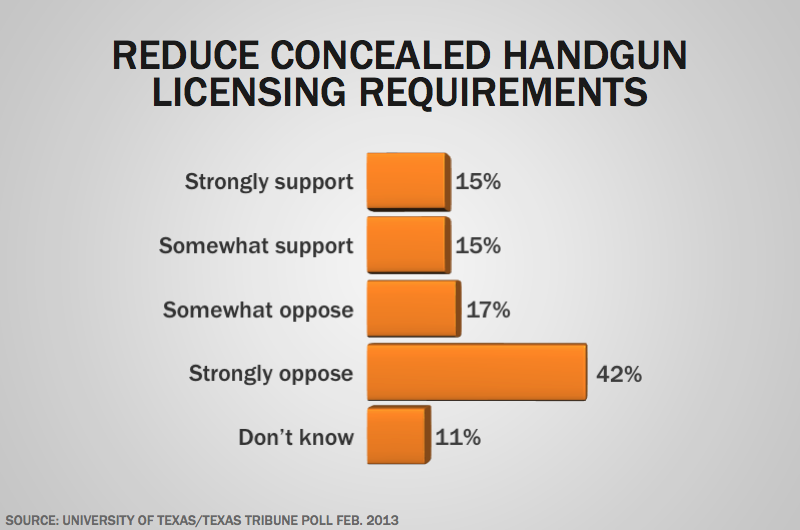 The findings put Texans at odds with the rest of the country, where — according to a recent New York Times/CBS News poll — majorities favor stricter gun laws, believe such laws would lower violence, and favor bans on semi-automatic weapons and high-capacity magazines.

Texans are generally supportive of the National Rifle Association; 49 percent said they have a favorable view of the NRA, against 32 percent with an unfavorable opinion. And within those numbers, 33 percent have a “very favorable” opinion of the organization, while 24 percent have “very unfavorable” views about it.

“It’s representative of a red state, of a Southwestern state,” Shaw said. “There are more people carrying guns than there are in a lot of states. There is a comfort level, maybe even a knowledge or familiarity with gun culture that doesn’t exist in some other states.” 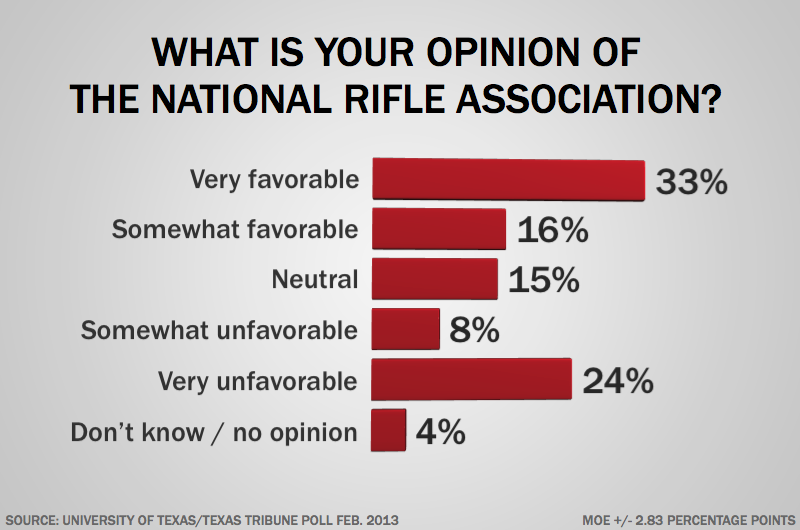 That had a strong partisan tang, as did other questions about guns and gun control: Those who identified themselves as very conservative were also those with the highest opinion of the NRA, while those who identified themselves as very liberal were overwhelmingly unfavorable to the group. Those who said they would support a Tea Party candidate in a congressional race were more likely than those who chose Republicans to also have a very favorable view of the NRA; Democrats were on the other end of the spectrum.

Why do they own them? The answers vary and overlap, but protection was the choice of 44 percent, followed by hunting, at 13 percent. Other choices scored lower, but 18 percent of the respondents checked “everything” to include protecting, hunting, sport shooting, work, collection, Second Amendment rights and so on.

This is the second of five stories on the latest University of Texas/Texas Tribune Poll. Yesterday: politics in Texas. Tomorrow: the mood of the state, and social issues.