Has Lt. Gov. David Dewhurst been a reliable conservative as presiding officer of the Texas Senate? It's clear that he's been a successfully stalwart Republican. Whether or not he has been sufficiently conservative though depends on your definition. As with beauty, conservatism is often in the eye of the beholder.

With its Texas-size personalities, supermajority requirements and informal traditions, the Texas Senate is not an easy institution to run. During his tenure in office, Dewhurst has skillfully balanced the preferences of the Senate’s 31 members to pass legislation that has both allowed the state to operate smoothly and efficiently as well as helped to make Texas a conservative model for the nation.

Dewhurst has employed a realistic conservative approach to managing the Senate legislative agenda, obtaining majority support for different bills from across the entire ideological spectrum. In doing so, he eschewed a pure partisan strategy, in some instances bringing numerous Democrats into his coalition to pass legislation while simultaneously leaving the most conservative Republicans out in the cold. However, even when brokering agreements with Democrats, the lieutenant governor virtually never allowed any legislation objected to by a majority of Senate Republicans to pass. 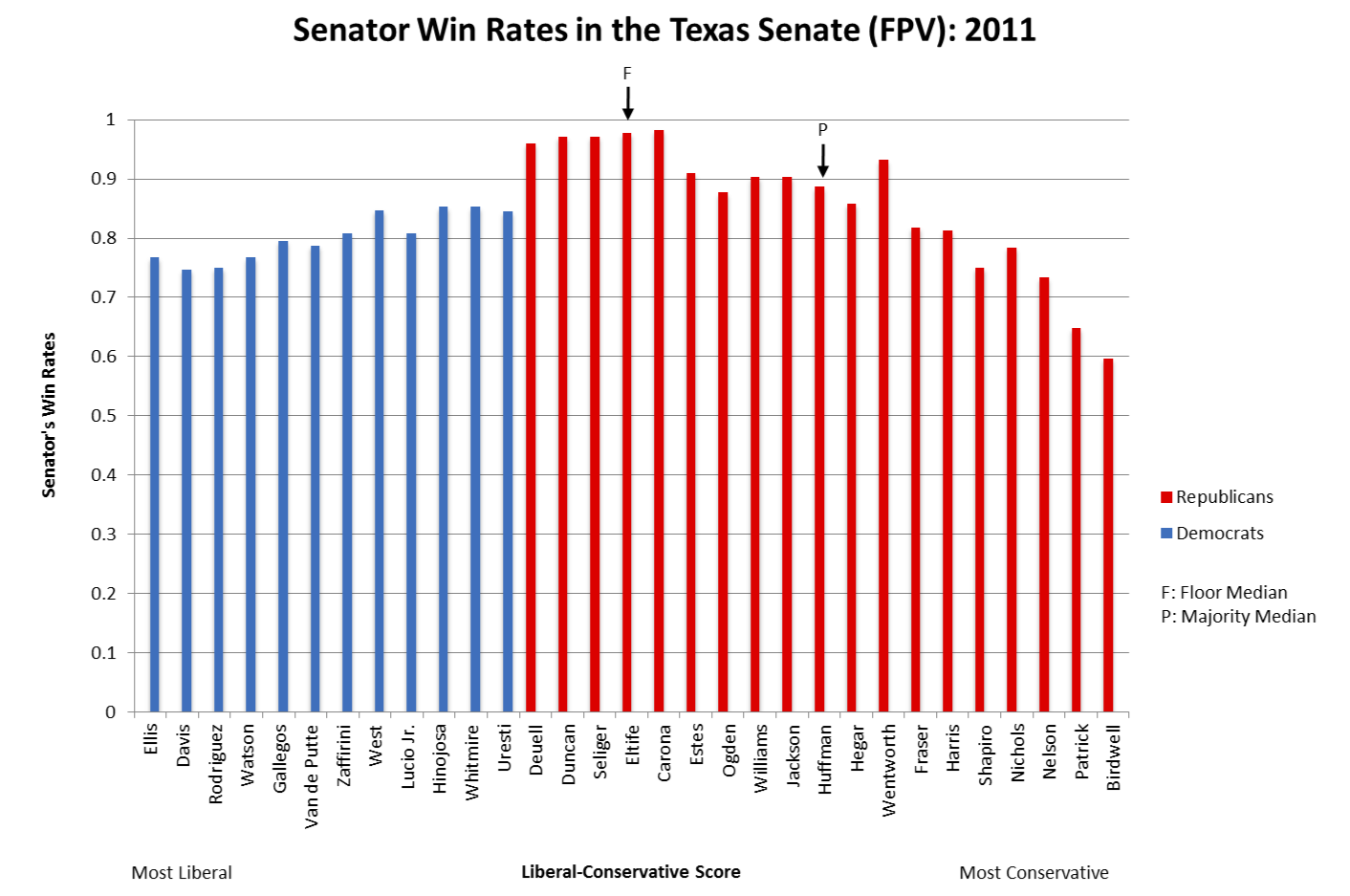 In March I wrote a column employing data from the 2011 legislative sessions to locate Dewhurst along an ideological continuum and to better understand how the lieutenant governor used his substantial powers of agenda control to manage the Senate legislative process. Here, I broaden and extend the analysis to include the 2009, 2007 and 2005 legislative periods.

These expanded data confirm the principal conclusions from March. Between 2005 and 2011 the lieutenant governor ran the Senate as a pragmatic conservative, guiding its legislative agenda in a manner consistent with the ideological and policy goals of a majority of Senate Republicans. On average, Dewhurst also appears to be about as conservative as three-fifths of the Republican senators who held office during each of the four periods. 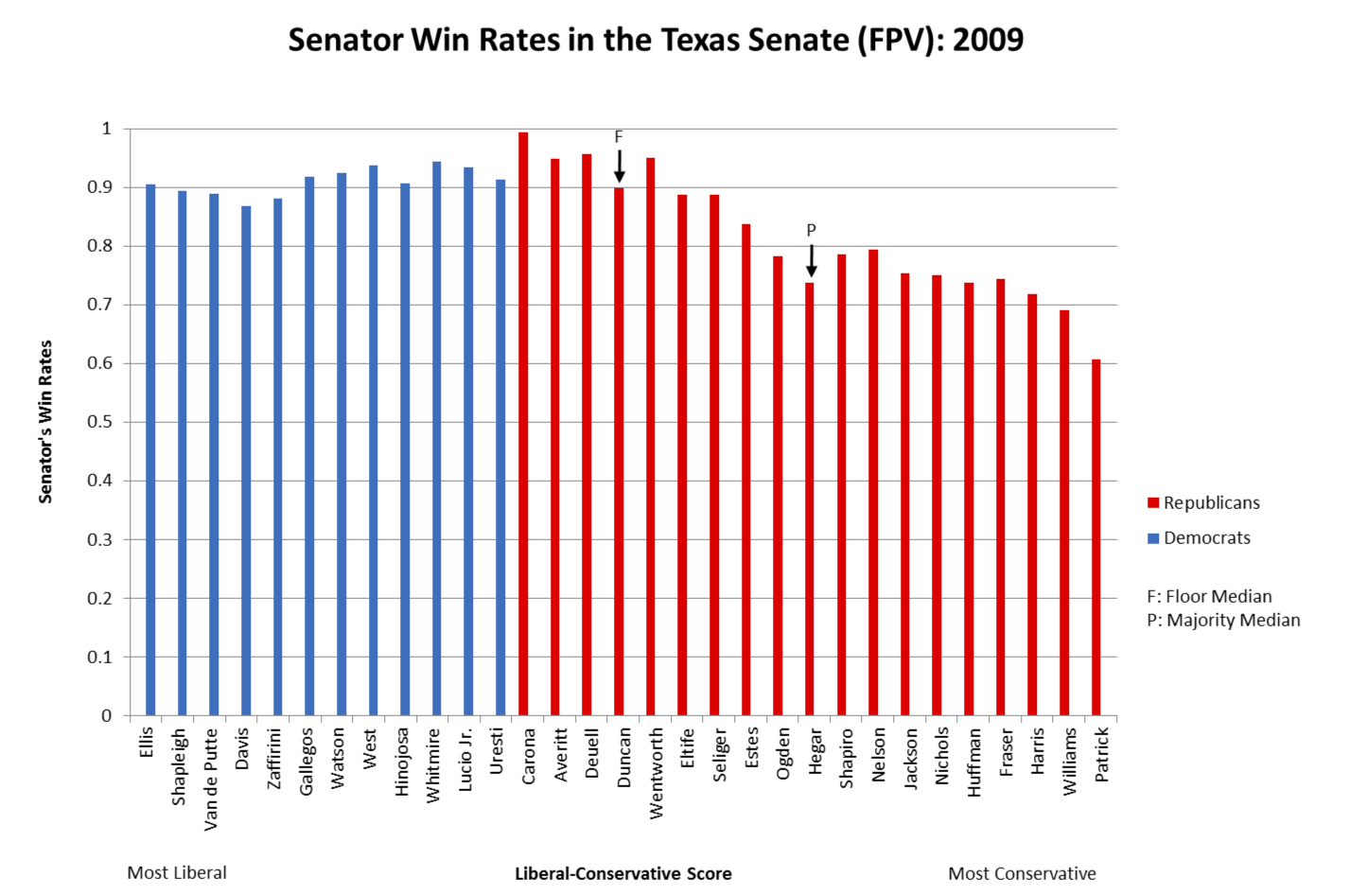 For the analysis of the 2011, 2009, 2007 and 2005 legislative periods I employ two sets of data. The first, located along the X axis of the charts for each of the four periods, is the Liberal-Conservative Score (Lib-Con Score), based on 684, 837, 498 and 649 nonlopsided roll call votes, respectively, for the 31 senators during each biennium. (A nonlopsided vote is one with at least two senators on the losing side.) The Lib-Con Score allows us to locate every senator on the liberal-conservative dimension along which most voting in the Texas Senate takes place. It is very important to keep in mind that simply because a Republican senator’s Lib-Con Score is located at the least conservative (i.e., moderate) end of the party’s continuum does not mean the senator is not a conservative; it simply signifies that his/her Lib-Con Score is less conservative than that of most GOP senators.

The second set of data, located along the Y axis in the charts, is the senators' win rate on final passage votes, indicating the percentage of votes cast where each voted on the winning side. Democrats are in blue, Republicans in red. In 2011, 2009, 2007 and 2005 there were, respectively, 176, 160, 113 and 103 such votes. Using the votes to suspend the regular order of business (so-called two-thirds rule votes) instead of final passage votes results in substantively similar senator win rates and conclusions. 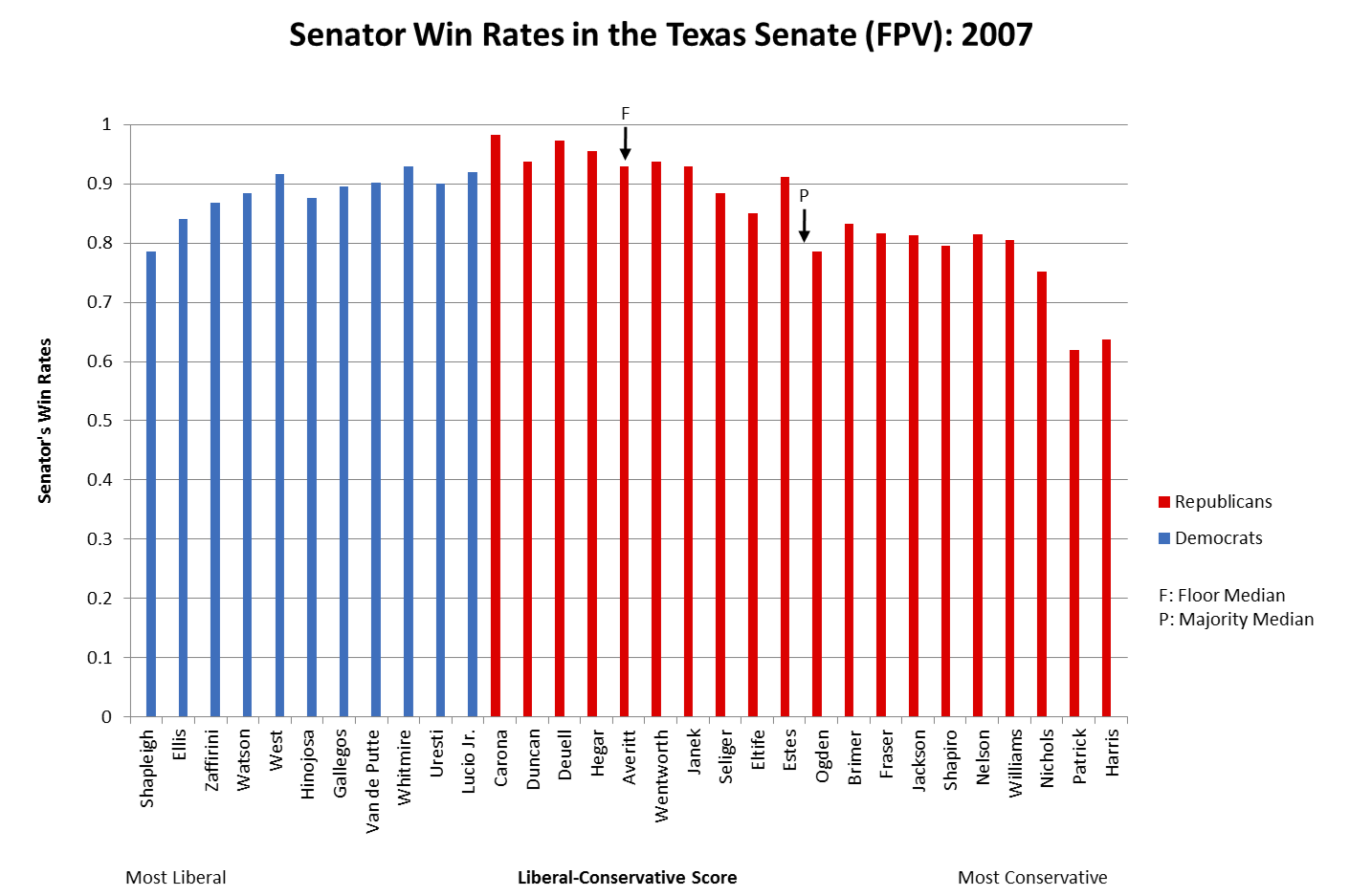 The Texas lieutenant governor is endowed with substantial institutional and political powers, which provide him with the ability to exercise considerable control over the legislative agenda — for instance, allowing him to prevent virtually all bills he opposes from obtaining final passage. As a consequence, even after considering other factors that might affect a senator’s win rate, one can reasonably infer that those senators with the highest win rates during each session are ideologically closest to the lieutenant governor.

In all four charts, the peak (i.e., where the highest win rates are grouped) provides a rough indication of the ideological location of the lieutenant governor on the liberal-conservative dimension. The peaks are generally located within the moderate wing of the Republican Senate delegation. In all four legislative sessions as one moves from left to right within the GOP, the win rate progressively decreases, with the drop sharpest on the outer edge of the Republican delegation.

Among senators in office for more than one term during this time frame, the most frequent opponent of the Dewhurst legislative agenda, 37 percent of the time, was Dan Patrick of Houston, while the senator who most consistently supported the Dewhurst agenda, 98 percent of the time, was John Carona of Dallas. Among multiple-term senators, Patrick was on average the most conservative during these years while Carona was among the three least conservative Republicans.

There also exists a gradual win rate decline within the Democratic Party as one moves away from the center and towards the left. However, the downward slope is much less steep than in the GOP, and virtually nonexistent in 2009, with the win rate gap between the most conservative and liberal Democrats quite small compared to that found between the most moderate and conservative Republicans. 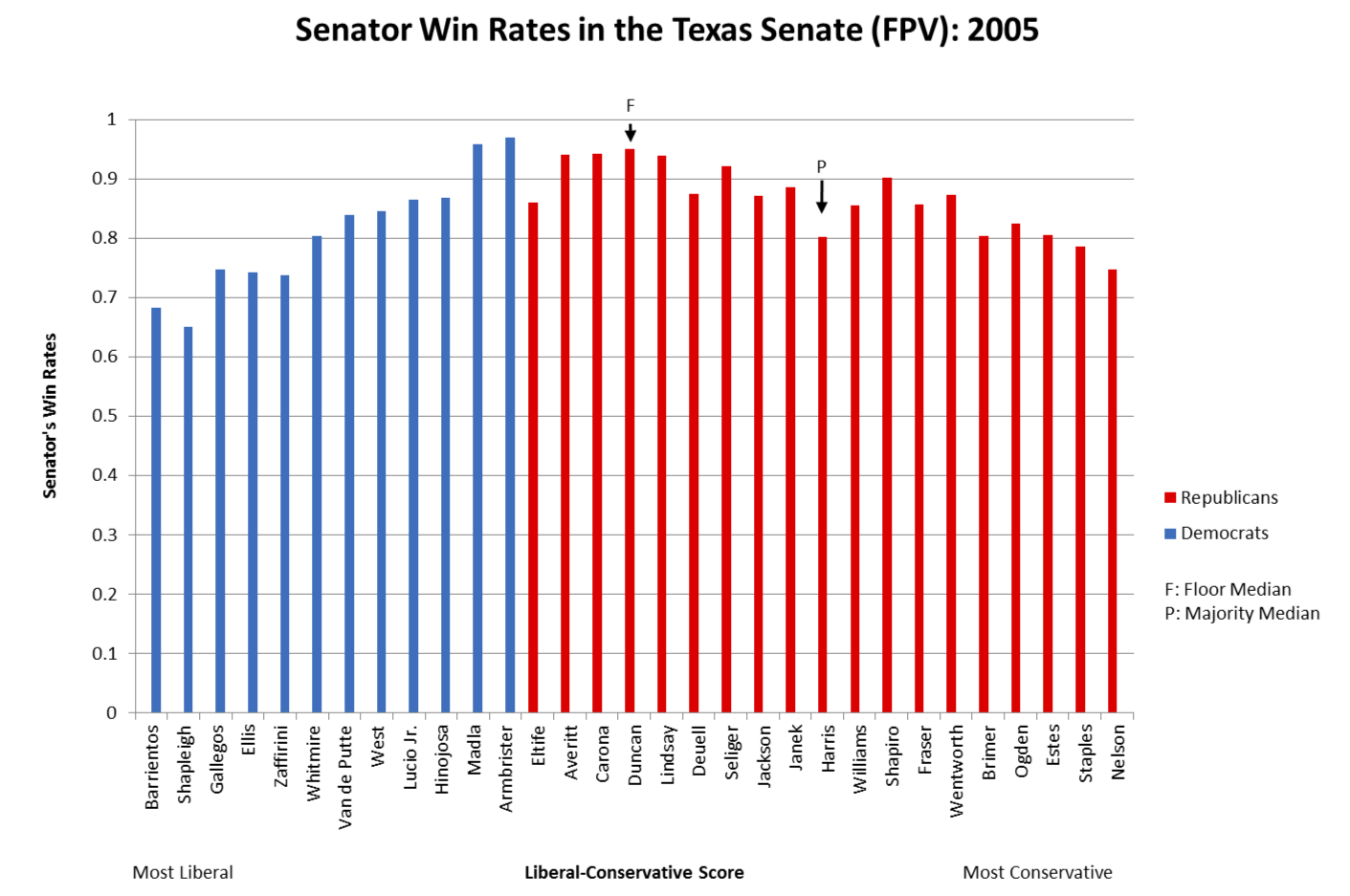 The charts highlight a Senate in which the legislative agenda appealed slightly more to the median member of the Senate than to the median member of the GOP delegation. In all cases, the senator who held the overall median position had a higher win rate than the senator who held the party median position. This pattern is in part explained by the Senate’s two-thirds rule and the need, even assuming unanimous GOP backing for a bill, to still obtain the support of at least one (2007) or two (2005, 2009, 2011) Democrats to bring most legislation to the floor for a vote. It also is though the product of many instances in which the lieutenant governor and senators in the moderate and centrist wings of the Republican delegation preferred the position of a notable number of the Democratic senators on a bill to that of a notable number of their more conservative Republican brethren.

Overall, the win rate data combined with the Lib-Con Score data for the 2005-2011 legislative periods suggest Dewhurst’s ideological location is somewhere in the moderate or centrist wings of the Republican Senate delegation. Roughly speaking, we can infer from the data, following the general analytic strategy detailed in the March column, that the lieutenant governor was not significantly more or less conservative than 11 of 19 Republican senators in 2011, 7 of 19 in 2009, 12 of 20 in 2007 and 14 of 19 in 2005. The flip side to this finding is that Dewhurst can be credibly considered to have been less conservative than between 12 (2009) and 5 (2005) of the members of the GOP Senate delegation during these periods. In addition, the comparatively low win rates of the GOP’s most conservative senators indicate that throughout this time frame they disagreed with a significant portion of the Dewhurst legislative agenda, a level of disagreement that except in 2005 was higher than that of numerous Democrats.

In all four legislative sessions, Dewhurst adroitly utilized his powers of agenda control to prevent legislation opposed by a majority of the Republican senators from passing. The GOP’s ‘roll rate’, the percentage of final passage votes where the majority of the party’s senators were on the losing side, was a mere 3 percent in 2011 and 2009, 0 percent in 2007 and 2 percent in 2005. By comparison, during their respective three and two terms as speaker of the Texas House, Tom Craddick’s Republican roll rate ranged from 4 percent (2003) to 14 percent (2005) and Joe Straus' from 11 percent (2011) to 32 percent (2009). These data underscore that the lieutenant governor did an outstanding job safeguarding the majority position of the Republican delegation over this eight year period, insuring that legislation objected to by a majority of the GOP senators did not make it out of the Capitol’s east wing.

This analysis of David Dewhurst’s Senate leadership helps shed some light on the undercurrents of a debate about the meaning of conservatism taking place today within the Republican Party of Texas — or at least over the litmus test a Republican must pass to be considered sufficiently conservative. Much of the current Senate campaign has revolved around whether Dewhurst has behaved as a “true conservative.” If embracing the positions of the party’s most conservative senators virtually all of the time and avoiding compromises with Democrats, with little or no consideration of legislative outcomes, is the test, then it is clear that Dewhurst fails. But if the test is obtaining the passage of legislation acceptable to most Republicans most of the time and ensuring the Senate’s Republican majority remains relatively cohesive and wins the legislative battles it engages in, then Dewhurst surely passes.

On the one hand, all of these distinctions may seem the stuff of academics; but on the other, what they reveal may be what much of the battle between Dewhurst and his movement conservative critics such as Ted Cruz has been about all along – fighting the good fight irrespective of the short- to medium-term policy consequences versus concentrating on winning those policy battles that can be won in the here and now. On July 31 we will learn which of these two general political philosophies a majority of Texas Republican primary runoff voters want their next U.S. senator to adhere to.