Candidates in the two crowded Republican primary races for the Texas Railroad Commission, grasping for voter attention and trying to break out of their respective packs, could be headed to July runoffs, according to the latest University of Texas/Texas Tribune poll.

The May survey also finds a strong Tea Party contingent in the Texas GOP, but not as strong as it was a year ago. Voters appear willing to consider alternatives to their current state representatives. Three-fifths said they plan to vote early instead of waiting for the May 29 election to come around after the three-day weekend. And they're about as engaged in a hypothetical 2014 race for lieutenant governor as they are in this year's races for the Railroad Commission. 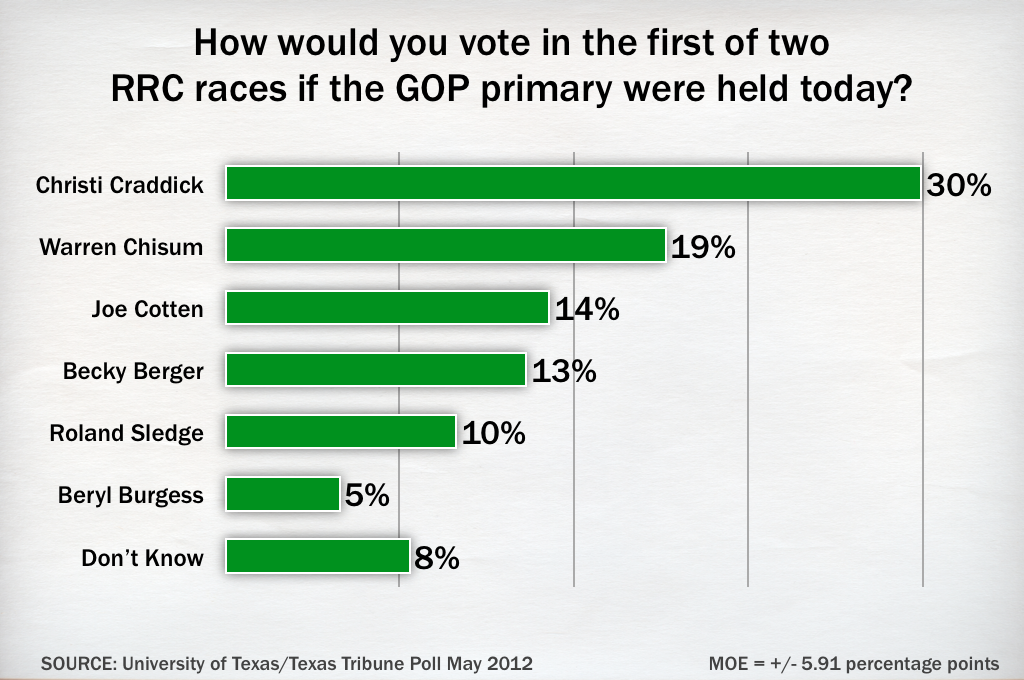 In one race for a seat on the commission, Christi Craddick leads Rep. Warren Chisum, R-Pampa, with 30 percent of the vote to his 19 percent. Three other candidates have double-digit support: Joe Cotten, at 14 percent; Becky Berger at 13 percent; and Roland Sledge, with 10 percent. Beryl Burgess got 5 percent in the poll.

In the other race, Comal County Commissioner Greg Parker, with 33 percent, leads Railroad Commissioner Barry Smitherman, with 26 percent, and Elizabeth Murray-Kolb, with 25 percent. Smitherman, appointed to the commission by Gov. Rick Perry after the resignation of Michael Williams, finds himself in a virtual tie for second with Murray-Kolb in a race that could also be destined for a July 31 runoff. Al Lee pulled in 8 percent in that race. Williams left to run for Congress; the winner will serve out the remaining two years of his term.

To avoid a runoff, a candidate must get a majority of the vote.

"Very few people are absolutely out of it," Daron Shaw, a UT-Austin government professor and co-director of the poll, said of the second race. In both races, he said, voters seem to be fumbling around. "What you're seeing is no real cues — some gender cues but little else. Voters just don't know much about these candidates."

In fact, at first blush, most voters said they didn't know who they would choose in the RRC races. In the first race, 63 percent of likely voters didn't initially have a choice, and in the second, that number was 51 percent. When pressed to say how they would vote today, the undecided numbers fell to about 8 percent in each race. 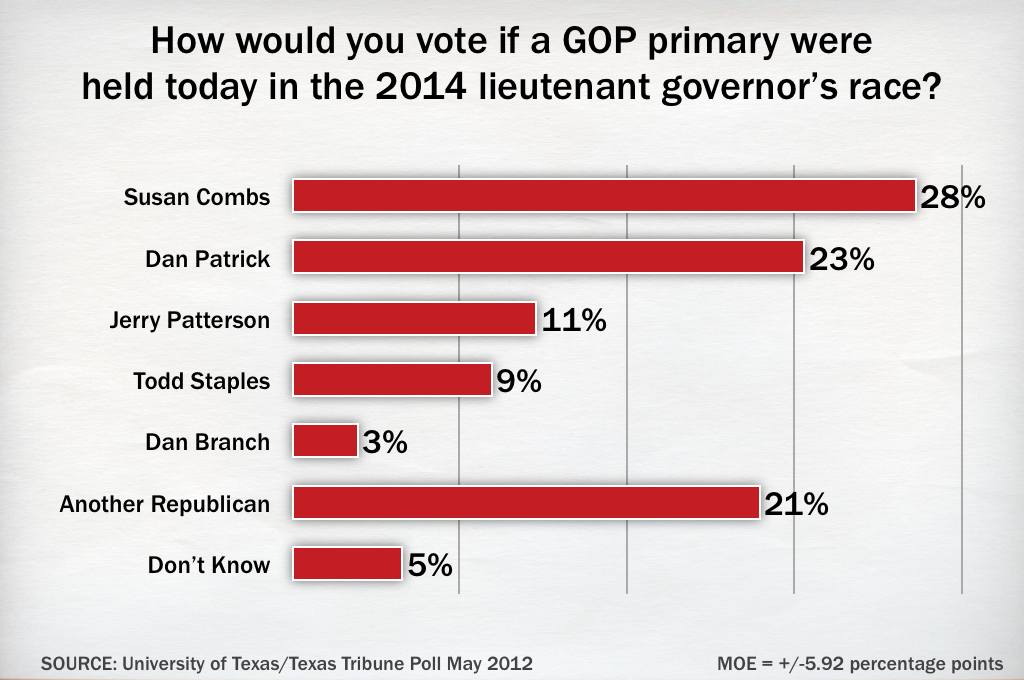 Several candidates have been nosing around in the 2014 races, positioning themselves in case some of the state's top jobs open up. The race for lieutenant governor leads the way — it's attracted vocal interest from three current state officeholders. The favorite in that race is Comptroller Susan Combs, with 28 percent, followed by state Sen. Dan Patrick, with 23 percent; Land Commissioner Jerry Patterson, with 11 percent; Agriculture Commissioner Todd Staples, with 9 percent; and state Rep. Dan Branch of Dallas, with 3 percent. One in five said they'd prefer "another Republican candidate."

"It's early," said poll co-director Jim Henson, who teaches government at the University of Texas at Austin and runs the Texas Politics Project. "We're polling in a race with no declared candidates. Still, you see the marks of a fight between people in the establishment and those who have problems with the establishment.

"Insurgency is becoming a Republican credential," he said.

Unlike the candidates on the May 29 ballot, this bunch — and whoever joins in later — has time to work. If the political climate stays like it is now, Shaw said Republican candidates will run to the right.

"There's some room in the race for candidates to brand themselves," Shaw said. "It's almost impossible to be too conservative in the Republican primary, and it doesn't seem to hurt them later in the general election." 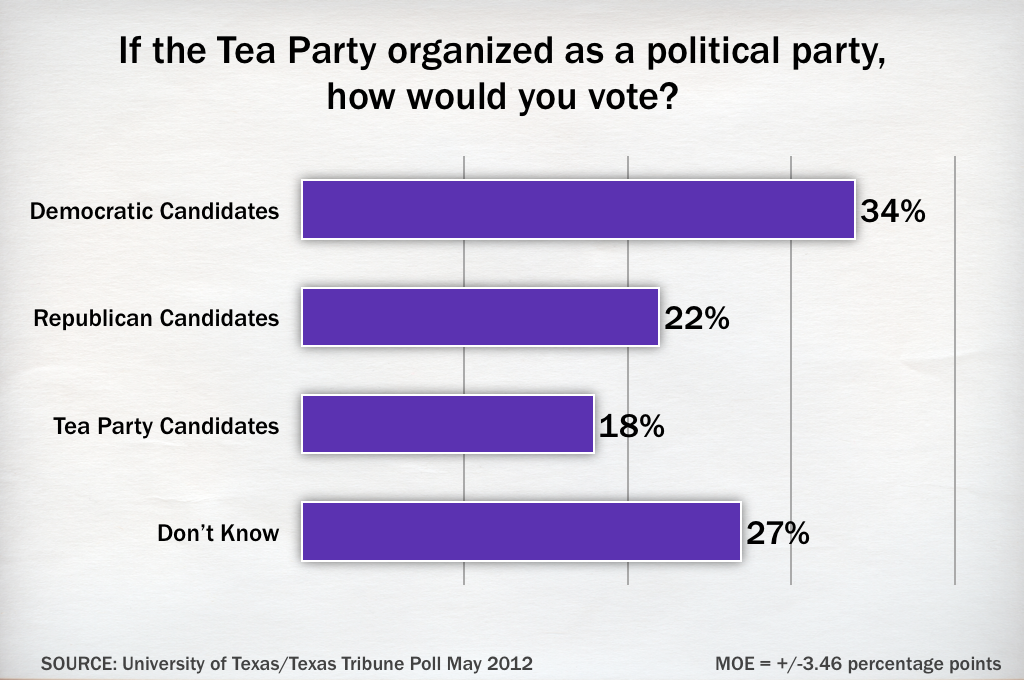 Those Tea Party numbers are lower than in some previous UT/TT surveys. A year ago, for instance, 33 percent said they'd vote for the Democrat, 24 percent for the Tea Party candidate, and 17 percent for Republican.

Almost a quarter of the voters — 23 percent — think the Tea Party's influence on the Republican Party is just about right. The same number said its influence is too small, and 29 percent said the movement has too much influence.

Voters aren't happy with the president or Congress, but state officials are in somewhat better shape. 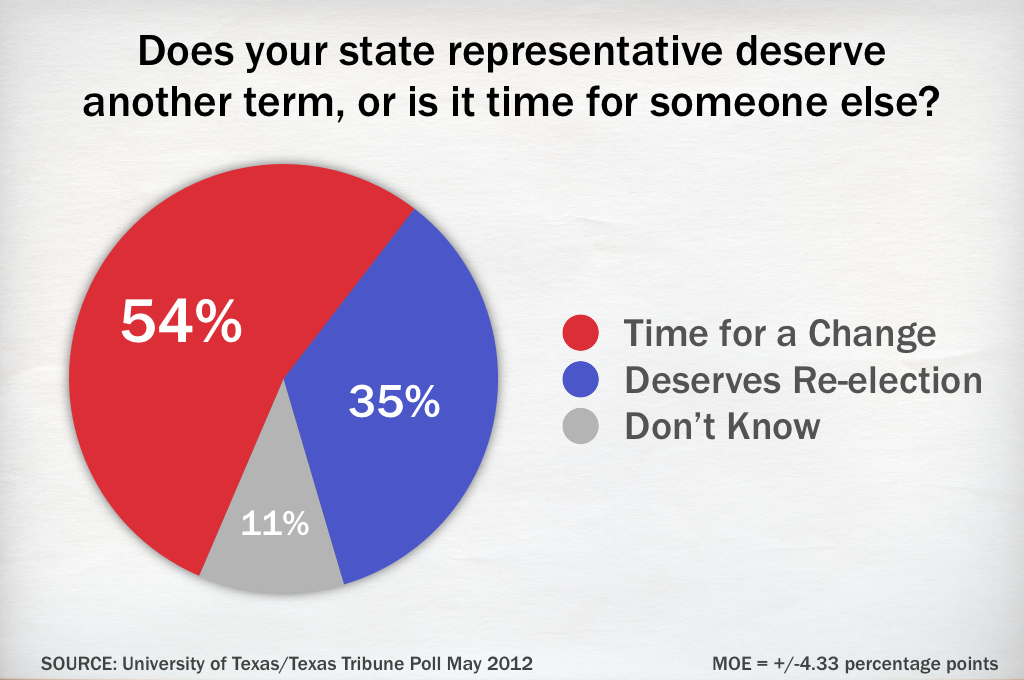 Asked what they look for in a candidate, the voters gave highest marks to issue positions, character and candidates' records, and lower marks to party and religious affiliations. A third said religious faith was either "not very important" or "not important at all."

Asked when they planned to vote, only 35 percent of likely voters chose election day, while 61 percent said they plan to cast their ballot early.

The UT/TT internet survey of 800 Texas voters was conducted May 7-13 and has a margin of error of +/- 3.46 percentage points. Questions asked only of Republican or Democratic voters have larger margins of error, as indicated. The numbers in the charts might not add exactly to 100 percent, because of rounding. And "likely voters" were defined as those who indicated they were "somewhat" or "extremely" interested in politics and who voted in "every" or "almost every" election in recent years.

Tomorrow's poll: The mood of the state.