Republican Rick Perry leads Democrat Bill White by 9 percentage points — 44 percent to 35 percent — in the 2010 race for governor, according to the latest University of Texas/Texas Tribune poll.

Those numbers are identical to the results of a "fantasy race" between White and Perry in the February UT/Tribune poll, which was taken before Democratic and Republican primary voters selected the two men as their nominees. This time, 15 percent said they don't know yet whom they'll vote for, and 7 percent said they'd prefer "someone else." That last finding could be consequential: Libertarians will choose their candidate for governor at a state convention next month, and that candidate or a write-in or some combination of the two could give those "someone else" voters a place to go.

At this point in the election cycle, Republicans lead Democrats in every statewide race in the UT/Tribune poll:

• Lt. Gov. David Dewhurst leads labor leader Linda Chavez-Thompson 44 percent to 30 percent, with undecideds at 20 percent and “someone else” at 6 percent.

• Attorney General Greg Abbott leads attorney Barbara Radnofsky 47 percent to 28 percent, with undecideds at 20 percent and “someone else” at 6 percent.

• In the race for Railroad Commissioner — the only statewide executive branch contest without an incumbent in it — David Porter, a Midland accountant, leads attorney Jeff Weems 39 percent to 27 percent, with 29 percent undecided and 6 percent preferring “someone else.”

"It's hard not to look at this and feel like the Republican recovery from the 2008 national surge is complete, and then some, in Texas," said pollster Jim Henson, who heads the Texas Politics Project and teaches government at UT. 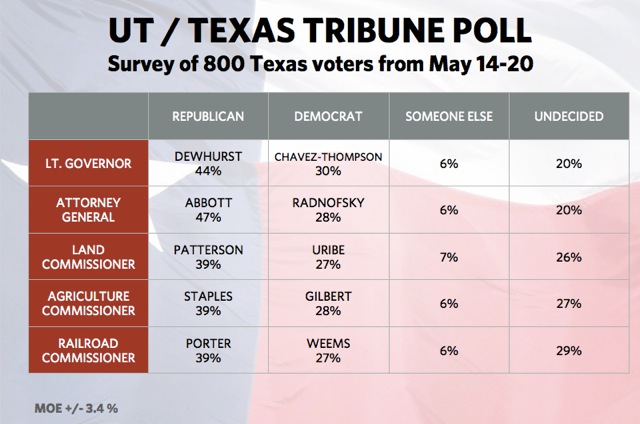 The incumbent governor has about the same number of supporters and detractors when it comes to his job performance: 42 percent approve of his work, 39 percent disapprove and 16 percent are neutral, saying they neither approve nor disapprove. Those who feel strongly one way or the other about Perry were more likely to disapprove (23 percent) than approve (13 percent).

"You take all of this together and you're seeing the solidification of anti-Washington sentiment trumping anti-incumbency," Henson says. "You've already seen the Perry campaign trying to identify White with this — they're obviously looking at the same thing."

The numbers in the races polled aren't far from the generic party numbers in the poll. Asked which party’s candidate they'd support in their local races for Congress, 46 percent chose the Republican and 34 percent chose the Democrat; 15 percent were undecided and 5 percent chose "someone else." Asked the same question about party preferences in state legislative races, voters gave a similar answer: 44 percent Republican, 33 percent Democrat, 18 percent undecided and 5 percent "someone else."

"Anecdotally, off the top of your head, if a Democrat runs against a Republican in the state of Texas, what’s the spread? Twelve points," says pollster Daron Shaw, a professor of government at UT. "This looks pretty much like a statewide election in Texas looks. It doesn't look like some huge Republican tide, but it doesn't look like a Democratic renaissance, either."

That — and the 6 or 7 percent of voters who chose "someone else" in specific head-to-head matchups — puts an asterisk of sorts on what otherwise looks like a Republican advantage. Voters might not be happy with the party in power, but they're not exactly rushing into the GOP’s embrace.

"It looks like a generic spread," Shaw says, but he adds that "votes that would normally accrue to the 'out' party are very sensitive to other options."

This is the third University of Texas/Texas Tribune poll (the first two are here and here). The Internet survey of 800 registered voters was conducted May 14-20 and has a margin of error of +/- 3.46 percent.