• "Felony charges should not have been pursued," said Travis County District Attorney Margaret Moore on Monday when announcing that her office was dropping its case against Dukes. At hand were allegations that the Austin Democrat had abused public office, stemming from claims Dukes had falsified entries on travel vouchers to get money for expenses she was not entitled to. A grand jury handed her 13 felony charges and two misdemeanor charges in January because of it — which carried a possible punishment of up to 28 years in jail and fines of up to $138,000.

• Where the two sides left it: In addition to dropping the felony charges, Moore said her office agreed to drop the misdemeanors if Dukes repaid the state around $1,500 to reimburse a former staffer who had babysat the lawmaker's daughter, plus a couple of additional fines. In a statement, Moore also acknowledged that charges against Dukes would not have been filed had Texas House officials been clearer from the start about travel reimbursement policy.

• What does this mean for 2018? Dukes made clear in a Facebook post Monday night she is looking forward to running for a 13th term to House District 46 in 2018 — a race that has already drawn several hopefuls who had been banking on competing for a vacated seat. The Austin American-Statesman reports that at least four Democrats are still planning to challenge Dukes for the slot in 2018, including former Austin City Council member Sheryl Cole.

• In the latest University of Texas/Texas Tribune poll, 47 percent of Texas voters identify with the GOP, while 42 percent side with Democrats. Also, while voters think the country is headed in the wrong direction by a two-to-one margin, the outlook appears to be more optimistic when we're talking about the state: 43 percent say Texas is on the right track, while 40 percent say it's headed down the wrong path.

Do you think Texas is headed in the right or wrong direction? Tell us with #MyTexasTake on Twitter and Facebook.

• A lot of eyes are on the U.S. Senate race in Texas next year, and U.S. Sen. Ted Cruz and U.S. Rep. Beto O'Rourke have starkly different roadmaps for campaign fundraising that could set their race apart nationally.

• House Speaker Joe Straus and Lt. Gov. Dan Patrick want lawmakers to study issues related to Hurricane Harvey — and to remember the Alamo — ahead of the 2019 legislative session.

• The American Civil Liberties Union wants the entire U.S. Court of Appeals for the D.C. Circuit to reconsider a Friday ruling that delayed an abortion for an undocumented minor in Texas.

• Dallas oil tycoon T. Boone Pickens is hosting a pro-Trump super PAC at his ranch today to talk about fundraising efforts ahead of the 2018 and 2020 elections. (Politico)

• UT-Austin is the only one out of 62 surveyed universities where the president is the sole appeals officer in Title IX cases. (The Daily Texan)

• The super PAC aligned with U.S. Speaker Paul Ryan has opened field offices in Texas to start helping GOP Reps. John Culberson of Houston and Will Hurd of Helotes in their 2018 re-election bids. (Fort Worth Star-Telegram)

• The Dallas City Council received a bit of criticism for moving too quickly to remove a Confederate statue last month. So council members now want the public's input before they act on other monuments and markers. (The Dallas Morning News $)

• The New York Times ($) talked to victims of hurricanes Harvey and Irma who are still waiting on FEMA. 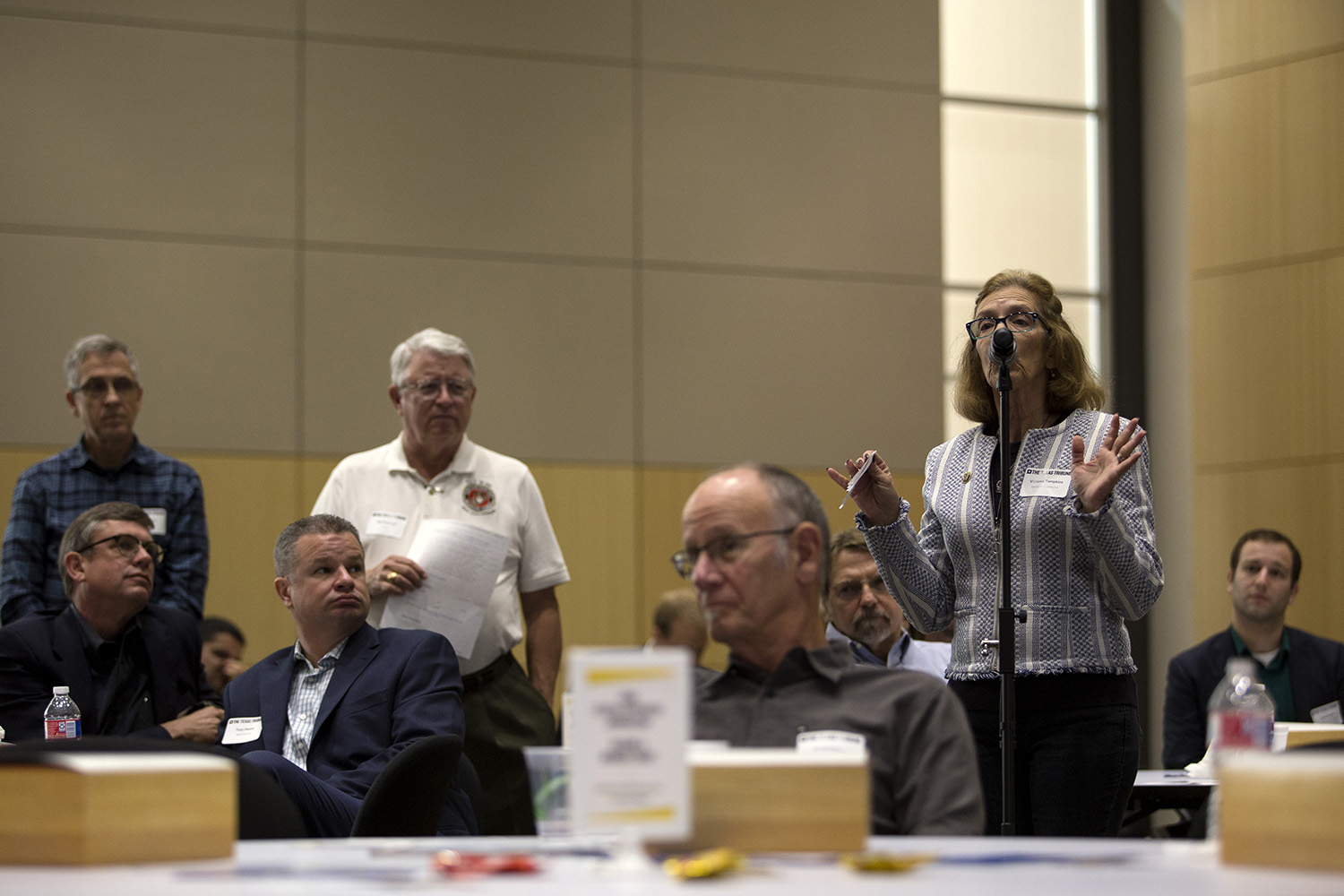 An audience member asks a question at a discussion moderated by Tribune CEO Evan Smith with state Sen. Brandon Creighton, R-Conroe, and state Rep. Tom Oliverson, R-Cypress, in The Woodlands on Oct. 23, 2017. Photo by Pu Ying Huang for The Texas Tribune. See more photos on our Instagram account.

"I’ll say that right now to anyone watching or listening: I don’t want super PACs involved. I don’t want their help."