Hurricane Harvey walloped Texas over the weekend — and it doesn't appear to be over yet. Here's what you need to know:

• As Texans readied for Hurricane Harvey to slam into the Texas coast on Friday, some in southeast Texas headed north, while others stayed put. Shelters in San Antonio and Austin filled up with people who fled their homes, and Gov. Greg Abbott said Saturday around 1,500 evacuees were staying in state parks.

• "This event is unprecedented," said the National Weather Service on Twitter Sunday. Over the course of the day, reports came in that at least five people in the Houston area had died, and many more were trapped in homes or on rooftops. Entire stretches of freeway in Houston — some of the most populous in the country — were completely submerged. Scientists are saying Harvey is likely to be the most devastating flood the Houston region has ever seen — and that's including Tropical Storm Allison in 2001, which was the worst rainstorm to ever hit an American city in modern history.

• It's not over yet. Harvey is continuing to feed rising waters throughout the nation's fourth largest city and its surrounding communities. Some parts of Texas could receive up to 50 inches of rain in the coming days, an amount that would exceed state records. Already, more than 1,000 people had been rescued between the city's fire and police department, according to Houston Mayor Sylvester Turner. The city's office of emergency management tweeted that more than 56,000 calls were made to Houston's 911 between 10 p.m. Saturday and 1 p.m. Sunday. On an average day, the line receives around 8,000 calls.

• The road ahead. "We still have two, possibly three days of this," Harris County Judge Ed Emmett said Sunday. Beyond that, it's expected to take months, if not years, to rebuild what Harvey destroyed and for affected Texans' lives to return to a sense of normalcy. Amid the tragedy throughout though, Texans are sticking together. A TV crew in Houston saved a stranded truck driver's life by flagging down a sheriff unit that was driving by — all while live on air. People are using their personal boats to rescue others trapped from the flooding.

• Trump's coming to Texas on Tuesday. "I will be going to Texas as soon as that trip can be made without causing disruption," the president tweeted Sunday morning, adding, "The focus must be life and safety." Gov. Greg Abbott, who's received briefings on Harvey throughout the weekend, and is involved in planning the state's next steps, thanked Trump afterward, adding, "Together we will overcome this challenge together."

We asked, you answered — here's what some of you saw this weekend with Hurricane Harvey in Texas:

• Here's how Texas prepared for Hurricane Harvey, and here's why the city of Houston wasn't ready for what came their way. Ahead of Harvey, state officials sent mixed messages on evacuations — and as it drew closer, some Texans headed north.

• Then Harvey hit, slamming the Texas coast and wreaking havoc on buildings that laid in its path. As one Texas county's long road to recovery began, the "worst flood" in Houston was born — and it's only going to get worse.

• Now some are asking: Why didn't the state's largest city order mandatory evacuations before Harvey? Houston's leaders are defending their calls for staying put. The debate on that is already beginning — but the focus for now remains on safety and rescues.

Join us on Aug. 30 for a conversation with state Sen. Bryan Hughes, R-Mineola, and state Rep. Gary VanDeaver, R-New Boston, at Texarkana College.

In Pearland, volunteer firefighters answer the call to evacuate stranded mobile home park — "'We've got to help our community,' [volunteer firefighter Chris] Gonzales said. 'Without us, who would help them?'" (The Dallas Morning News, Aug. 27, 2017)

Texas flood disaster: Harvey has unloaded 9 trillion gallons of water — "So far, just the rain that has already fallen across the greater Houston area and Southeast Texas tallies to 9 trillion gallons. That's only what has already come down, and keep in mind that 5 trillion to 10 trillion additional gallons could fall before things wrap up midweek." (The Washington Post, Aug. 27, 2017)

Rescuers pluck hundreds from rising floodwaters in Houston — "Some people used inflatable beach toys, rubber rafts and even air mattresses to get through the water to safety. Others waded while carrying trash bags stuffed with their belongings and small animals in picnic coolers." (Associated Press, Aug. 27, 2017) 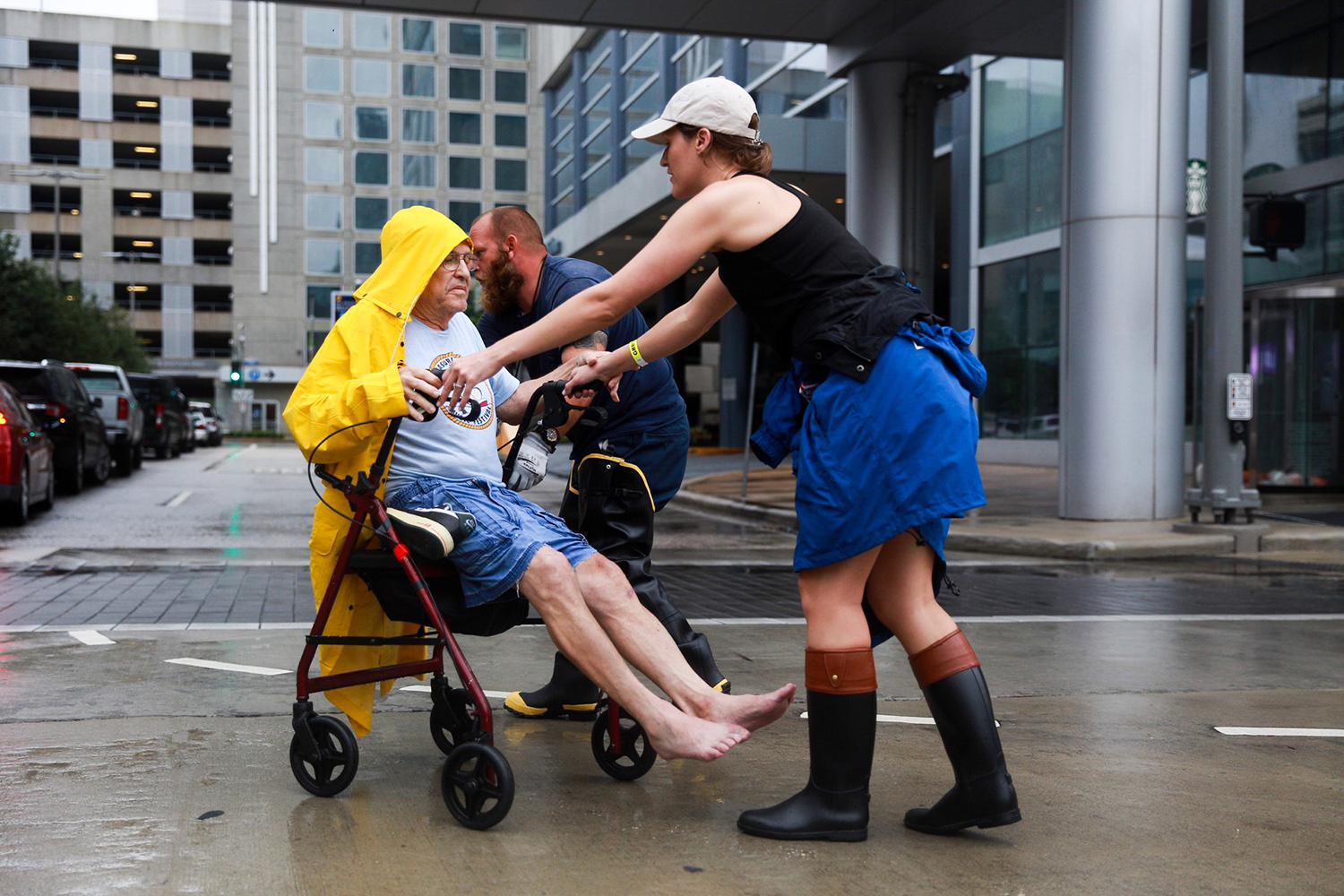 An evacuee from Meyerland — a neighborhood in southwest Houston hit hard by Harvey — arrived at the George R. Brown Convention Center on Aug. 27. Photo by Pu Ying Huang for The Texas Tribune. See more photos on our Instagram account.

"This is the history-making hurricane. This the one people will always be talking about."

— Ruben Sazon, on Harvey pummeling the area he has called home for more than two decades.