What you need to know, part I

Brace yourselves this weekend, Texans — Hurricane Harvey is coming, and it doesn't show signs of slowing down. Here's what you need to know:

• This could be big. Hurricane Harvey was upgraded from a tropical storm to a hurricane Thursday morning, and it is expected to become a Category 3 storm by the time it hits land. Gov. Greg Abbott declared a state of disaster for 30 Texas counties earlier this week, and places such as the city of Port Aransas and Calhoun County have already issued mandatory evacuations. Texans along the coast are bracing for heavy flooding and winds of more than 100 mph.

• Is Texas ready? The Texas Tribune and ProPublica asked that question last year. If a hurricane hits the thousands of storage tanks holding the world's largest concentrations of oil, gases and chemicals lined along the Houston Ship Channel just right, more than 25 feet of water could gush up the channel. If even one tank ruptures, hundreds of thousands of people could be impacted. And with voluntary evacuations in Galveston, Corpus Christi and elsewhere, traffic could be a nightmare. We've looked at that issue before as well, and it's possible another less-than-desirable situation on the roads could precede what's in store this weekend as people from the coast flock to Dallas, San Antonio and Austin.

• President Trump and Abbott spoke over the phone Thursday, where Trump offered federal resources for the state and pledged the federal government's help in preparation, rescue and recovery efforts. This morning, Abbott is getting briefed at the Texas Department of Public Safety's State Operations Center and holding a press conference there afterward. You can watch a livestream on our Facebook page.

We asked, you answered — here's what some of you said about past experiences with hurricanes in Texas: @JennyRogers11 said, "Rita, 2005: I was east of Dallas. Town already crowded with Katrina refugees. There was a run on gas, and gas stations closed." @traciemom, said, "Alicia, Allison and Ike. All monsters. W/out power, no gas or water. Worked in TMC in Allison. Wicked." Another user, @CajunAngela, said, "Once hurricane meant family would come. We would make gumbo, play Cajun music. Laissez bon temps rouler. Not now." @jodyssanders said: "I grew up in Orange, TX, but luckily saw only minor ones. Family and friends had severe damage from Rita and Ike but rebuilt." If you're safe and able, share with us photos or videos of what you see this weekend with #MyTexasTake.

What you need to know, part II

A panel of federal judges unanimously ruled Thursday that parts of the Texas House map must be redrawn before 2018 elections begin because state lawmakers intentionally discriminated against minorities in drawing several legislative districts. Here's more on that:

• The court flagged four districts that need redrawn ahead of 2018 elections, but adjusting those boundaries could have ripple effects on other nearby races. The judges said House districts in Dallas, Nueces, Bell and Tarrant counties were drawn intentionally to dilute the strength of black and Latino voters. In some cases, they found mapdrawers also went the extra mile "to ensure Anglo control" of legislative districts.

• Yesterday's ruling marks the state's fourth voting rights loss in court in nine days — and state lawmakers and officials haven't shown they're game to work on mapmaking in Austin anytime soon. First there was a ruling on Texas' congressional map, then one on a voting law restricting language interpretation access at polls and finally another tossing out the state's new voter ID law on Wednesday. As we noted earlier, the two political parties have firmed their stances on this: Democrats point a finger at Republicans and say they intentionally discriminated against minority voters in the state, while the GOP calls the court rulings "outrageous" and says they plan to appeal the legal ruling to the U.S. Supreme Court.

• The clock's ticking. Local elections administrators have said they need legal questions surrounding Texas' maps answered by October, so they can meet deadlines for sending out voter registration cards. A big question still on the table is whether judges will OK new political boundaries without delaying the March 2018 primaries.

• From Ross Ramsey: Voters in Collin County are in for their own version of Family Feud in next year's race for a Texas Senate seat.

• The question on everyone's mind these days: Will U.S. Rep. Beto O'Rourke, a Democrat vying for a seat in the U.S. Senate, stand on the sidelines as his party goes all out to defeat his friend, U.S. Rep. Will Hurd, in 2018?

• UT-Austin got sued for removing Confederate statues from campus.

• The Rio Grande Valley is planning to keep its checkpoints open during Hurricane Harvey.

• The UT System is about to get a little bit smaller.

• You can request anything under the state's Public Information Act. But is everything up for grabs? That's a different story.

• Can you remember the first time you cast a ballot? If so, we want to hear about it. Tell us about your first voting experience here.

Can U.S. Rep. Beto O'Rourke show Democrats in Texas his party can recover? (The Economist)

The city of San Marcos filed a 16-page amicus brief against the state's new "sanctuary cities" law. (The Austin American-Statesman $) 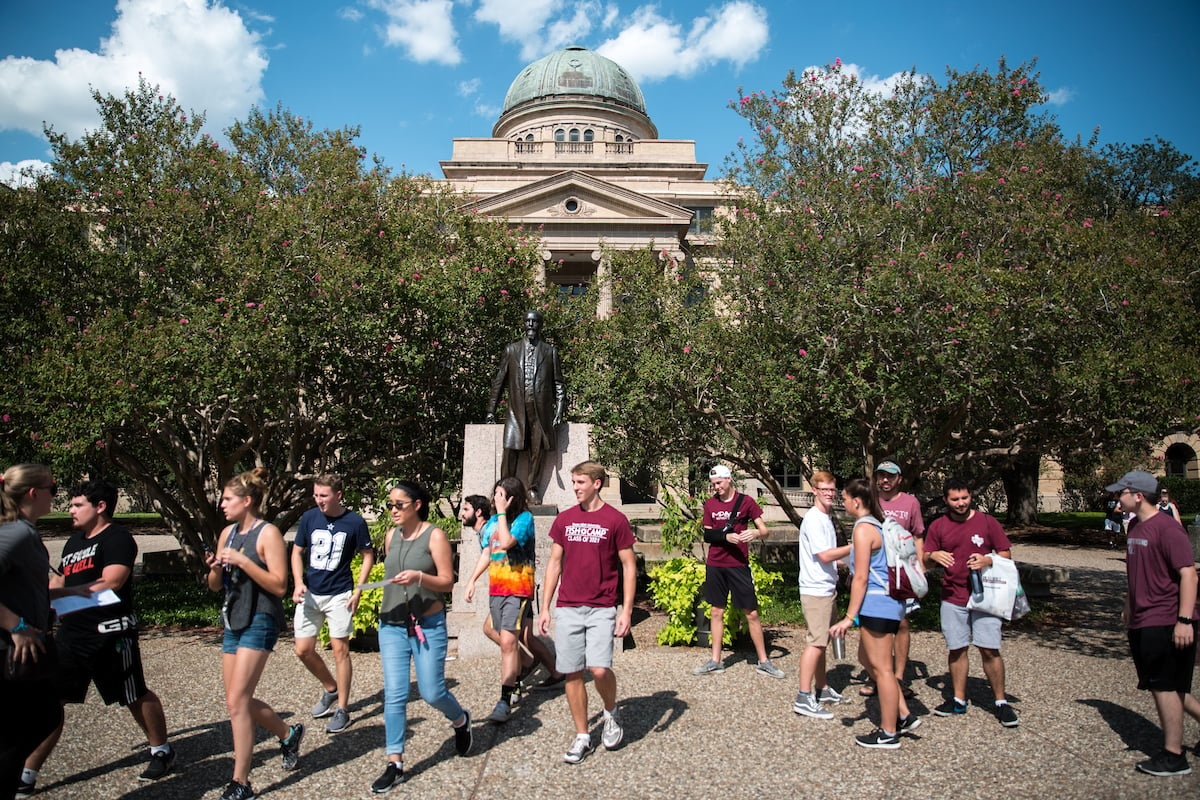 A statue of Lawrence Sullivan "Sul" Ross at Texas A&M University on Aug. 23. Ross was a Civil War general in the Confederate Army, Texas' 19th governor and a president of the university. Photo by Shelby Knowles. See more photos on our Instagram account.

"The judges held that maps they themselves adopted violate the law. Needless to say, we will appeal."