The Legislature's attempt to fix one of the nation's strictest voter ID laws didn't get the job done, a federal judge ruled Wednesday. The legal battle over the state's voter identification requirements has been many years in the making, and Texas has already said it plans to appeal the ruling. Here's what you need to know:

• The history on this: After the U.S. 5th Circuit Court of Appeals ruled last year that a 2011 voter ID law burdened Latino and black voters in the state, U.S. District Judge Nelva Gonzales Ramos took it a step further — and ruled in April that Texas discriminated against those voters on purpose.

• In response, the Texas Legislature passed a bill this spring that loosened the 2011 voter ID law — hoping that the new measure could solve the problem. But opponents who took issue with the 2011 law argued in June that the new law wouldn't ease discrimination against minority voters or expand ballot access for those people in the future. The Trump administration waded into the legal battle in July, arguing that the state's latest attempt fixed any problems the 2011 law created and urged courts to drop further action.

• But Ramos sided with opponents of the new law on Wednesday, agreeing it didn't excuse lawmakers from discriminating against minority voters and adding that the state failed to show how the latest attempt would accommodate those voters moving forward. Her ruling means that the squabbling over the state's voter ID requirements continues — and it opens up another round of considering whether the federal government should once again pre-approve the state's election laws before they can go into effect.

• Does this sound familiar? Ramos ruled that the voter ID law violated the U.S. Constitution and Voting Rights Act by placing "disproportionate burdens" on black and Latino voters in the state. That's essentially what a San Antonio federal court has told Texas in its pending redistricting battle over political maps. With a similar story line comes predictable action — Democrats have said Texas Republicans intentionally discriminated, while GOP leaders have already announced their plans to appeal the court's decision.

• If you're keeping track: The state spent more than $3.5 million through April 2016 defending its voter ID laws — and so far, it hasn't won a single round. Also, Wednesday's ruling marked the state's third voting rights loss in court in the last eight days.

• Can you remember the first time you cast a ballot? If so, we need your help. Tell us about your first voting experience here.

• Texas A&M Board of Regents gave Chancellor John Sharp a three-year extension on his contract.

• It's official — state Sen. Van Taylor from Plano is running for Congress.

That Sept. 5 deadline is looming — is President Trump going to side with a coalition of states leading the charge to end an immigration program for young undocumented immigrants? (Politico)

What do you get when you combine a small Texas town's varsity football team and a sexual abuse scandal? Short answer: A nightmare. (The Daily Beast)

The Port of Corpus Christi has made it on the global map. Finally. (Texas Monthly)

People are planning to bring their own Bowie knives to the Alamo next week. (San Antonio Express-News $)

What's life like for Texans who have student loan debt? (The Dallas Morning News $) 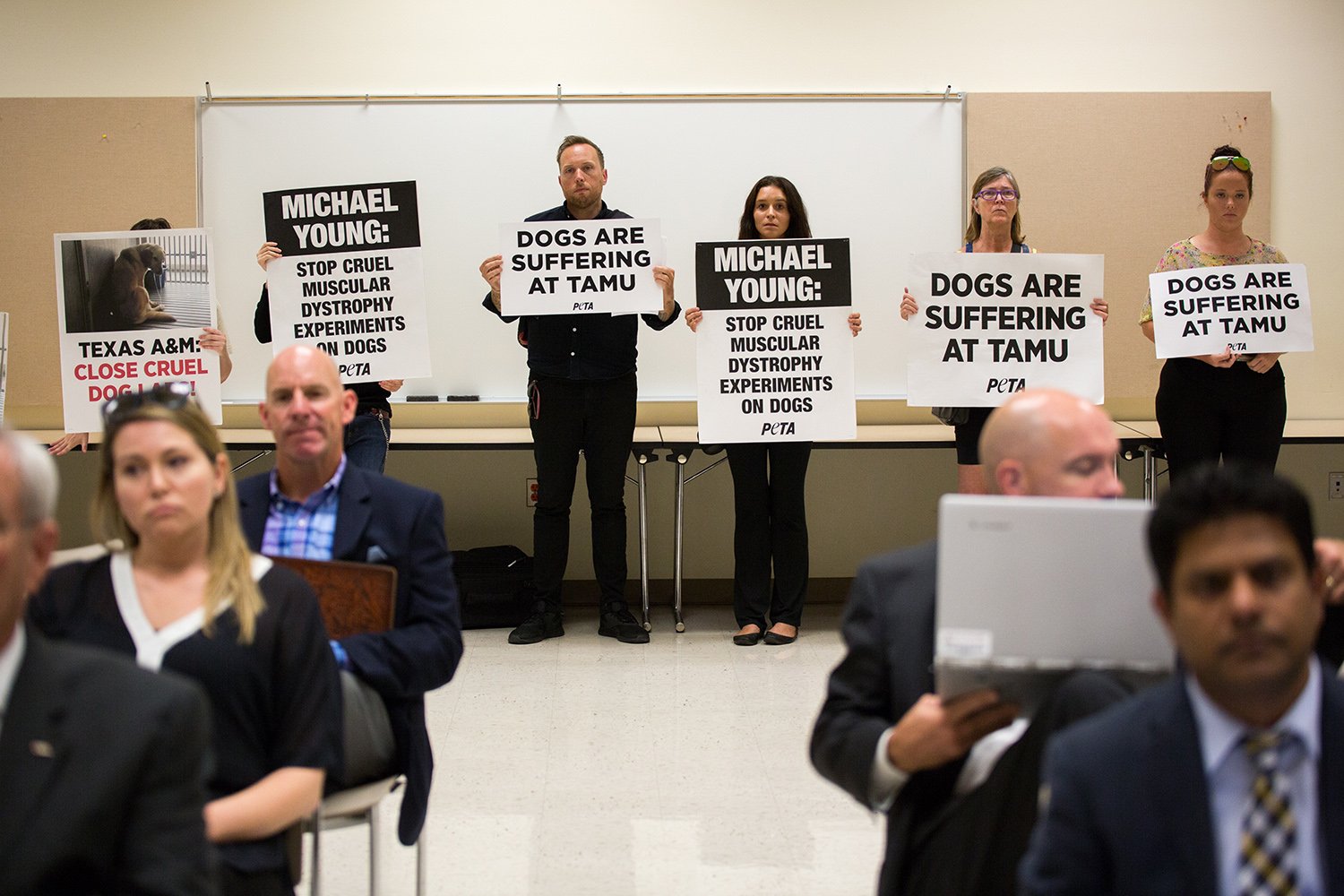 Members of PETA (People for the Ethical Treatment of Animals) protested at a Texas A&M Board of Regents' meeting in College Station on Aug. 23. Photo by Shelby Knowles. See more photos on our Instagram account.

"Nobody wants to be a cop anymore."