As you drifted off to sleep last night, the University of Texas at Austin began removing multiple Confederate statues on campus. Here's what you need to know:

• Workers began removing the statues of Robert. E. Lee, Albert Sidney Johnston and John Reagan from the university's main plaza late Sunday night. The news was delivered to the campus community via an email from UT-Austin President Greg Fenves just before 11 p.m., who said the monuments depicted parts of U.S. history that "run counter to the university's core values." Another statue, one of former Texas Gov. James Stephen Hogg, was also taken down.

• "We do not choose our history, but we choose what we honor and celebrate on our campus," Fenves wrote, adding that recent unrest in Charlottesville, Virginia, "make it clear, now more than ever, that Confederate monuments have become symbols of modern white supremacy and neo-Nazism." Sunday night didn't mark the university's first removal of Confederate statues, though; in 2015, after the fatal shooting of black parishioners at a South Carolina church, the university relocated a statue of Jefferson Davis from the campus' main plaza to a nearby museum.

• Why were the statues removed on a Sunday — and at night? Rallies and petitions calling for the removal of Confederate statues have been happening across the state since the Charlottesville attack, including Houston, Dallas and Austin just over the weekend. A UT-Austin spokesperson told The Texas Tribune that the university decided to take down the statues in the middle of the night "for public safety and to minimize disruption to the community." Per Fenves' email, the three Confederate statues are headed to the Briscoe Center for American History, while the statue of Hogg "will be considered for re-installation at another campus site."

• By all appearances, the issue is likely to remain in the spotlight — a group of residents in Tyler are set to ask the local school board to rename Robert E. Lee High School later this morning.

• How does the UT System and UT-Austin spend its mammoth endowment, which now gives the system an annual pot of hundreds of millions of dollars? Spoiler alert: Very little goes towards financial aid.

• From Ross Ramsey: Big cities are at war with the state. But they fared much better during the special session than some anticipated.

• Did you experience a potentially fatal pregnancy complication, or have you lost a loved one who died soon after giving birth? We want to hear your story. Help us investigate why Texas moms are dying at alarming rates.

• Texas lawmakers have fought over the bathroom bill for more than a year. Watch the whole thing unfold in 5 minutes.

• #HuffinesCaucus? On Friday, state Rep. Matt Shaheen, R-Plano, announced he was not running for the Texas Senate. That could clear the way for Phillip Huffines to join his twin brother — state Sen. Don Huffines, R-Dallas — in the Senate.

There are no Nazi statues in Germany. Here's what the South can learn from a postwar Europe. (Politico)

Later this week, U.S. Sen. Ted Cruz is making his third trip of the year to the Rio Grande Valley. (The Brownsville Herald)

Private prisons are booming in Texas and across America under Donald Trump's immigration crackdown. (The Houston Chronicle $)

"It's easy to call him an idiot because he is," Mark Cuban said of President Donald Trump on Friday. (The Dallas Morning News $)

The Texas Legislature's bathroom bills have galvanized the transgender community in Texas like never before. (The Dallas Morning News $) 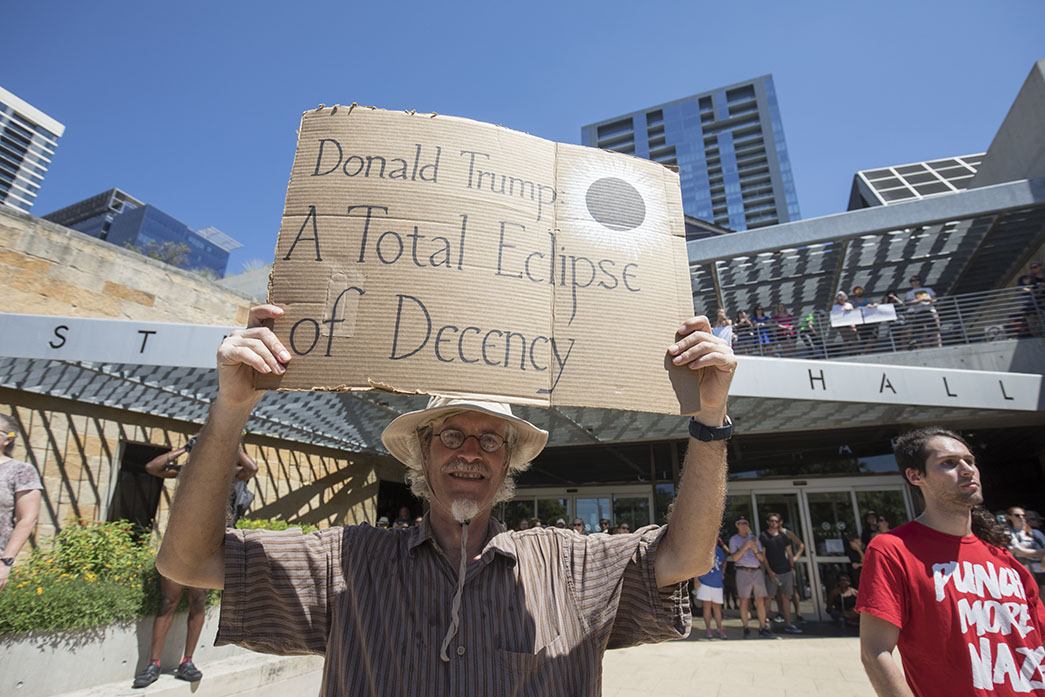 "While the three-judge decision about some Republican redistricting wrongs is legally correct, nothing will be finally resolved until the Supreme Court has its say."

— U.S. Rep. Lloyd Doggett, D-Austin, on the news Friday that Texas will appeal the latest redistricting ruling to the U.S. Supreme Court

Disclosure: The University of Texas at Austin and Steve Adler, a former Texas Tribune board chairman, have been financial supporters of The Texas Tribune. A complete list of Tribune donors and sponsors is available here.