The Texas House is readying to debate a handful of proposals this morning aimed at reforming the state's school finance system. Here's what you need to know:

• School finance at #txlege has had a bumpy ride. As the 140-day regular session came to an end in May, so did two high-profile measures — school finance reform and "private school choice" — in the same bill. Amid peaked tensions and politicking, the Senate voted to attach a private school choice program to a prized House bill that would have thrown $1.5 billion into public schools. The House, which has opposed subsidizing private schools, was angered, and the two chambers deadlocked on the issue.

• Fast forward to a couple weeks ago, when Gov. Greg Abbott expanded the special session call to include school finance. State Rep. Dan Huberty, who heads the House Public Ed committee, filed House Bill 21 shortly after — which school groups at first opposed, thanks to a provision in it that contained funding for charter schools. So Huberty tweaked the bill, replicating the legislation that died during the regular session to pump state funds into public schools — while simplifying the spending formulas for them — and help smaller school districts in rural areas that depend on a state aid program expiring in September.

• Over in the upper chamber, senators last week approved a bill establishing a private school choice program and another creating a 13-person commission to study the school finance system. Tensions remain between the two chambers on the issue, though: Lt. Gov. Dan Patrick, head of the Senate, has referred to the lower chamber's approach for funding the public school system as a Ponzi scheme, and House education leaders have said they don't plan to budge on school finance or private school choice. For his part, House Speaker Joe Straus has previously waved off the idea of a commission informing the Legislature on how to fix the system.

• The House gavels in at 10 a.m., and as of this morning, HB 21 has fewer than 20 pre-filed amendments from other House members hoping to tweak the bill. The lower chamber is also set to consider a few other school finance-related proposals, including one that would establish a statewide program awarding grants to schools that provide services to students with autism. It's unclear how long today will last, but follow Texas Tribune reporter Aliyya Swaby for updates out of the House.

• The Senate is back in business at 10:30 this morning. The upper chamber referred one of the House's two "sunset" bills to a committee and postponed legislation that would place caps on local spending for a third time yesterday. Follow Emma Platoff and Shannon Najmabadi for updates.

• You asked, we answered: Why can't the state establish a property tax to fund public education?

• Texas Republicans are trying again to pass a law barring certain public employees from using payroll deductions to pay their union or association dues. The move is following the lead of several other states that have seen mixed results.

• Around 1,000 hot Texas prisoners may soon be moving to cooler accommodations.

• From Ross Ramsey: A Texas House committee tried — wait for it — shock therapy on school finance.

• The Texas House gave the early OK to reversing cuts to disabled children's therapy services, even though it's not explicitly on Gov. Abbott's special session agenda.

Republicans leave town with no clear path on Obamacare, Politico 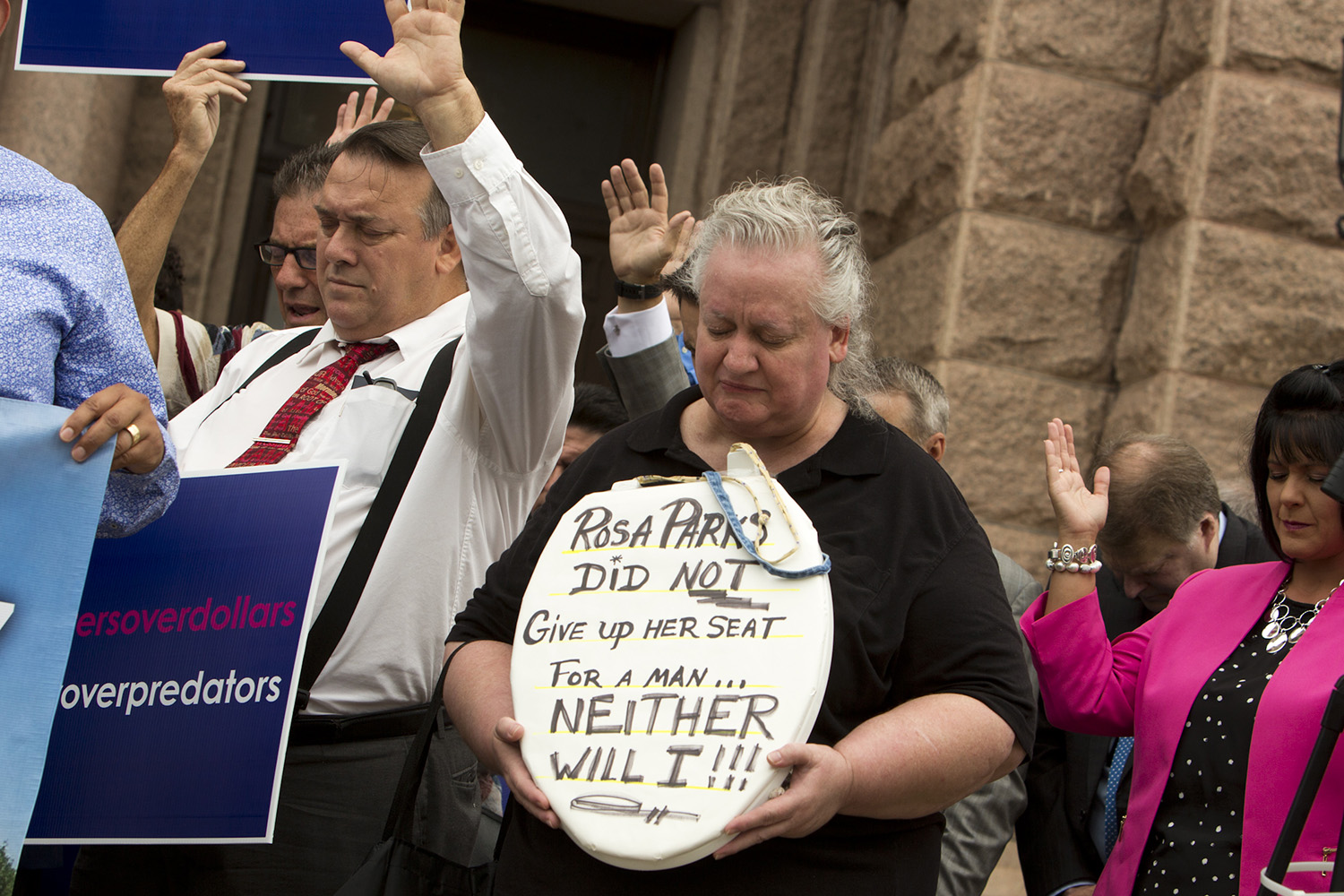 At a rally pastors held in support of the "bathroom bill," at the Capitol on Aug. 3, one supporter held a toilet seat that read, "Rosa Parks did not give up her seat for a man ... Neither will I!!!" Photo by Marjorie Kamys Cotera. See more photos on our Instagram account.

"I think Sean Spicer works for the governor now because he’s saying things that were being said out of Washington."