The House is scheduled to take up a property tax bill today that could push the 85th legislative session into overtime if it doesn't pass. On Tuesday, Lt. Gov. Dan Patrick threatened to force a special session over Senate Bill 2, the tax bill, and the "bathroom bill" if they don't make it through the chamber. House Speaker Joe Straus has called Patrick's actions "regrettable" and hoped he would reconsider the ultimatum. Here's what you need to know:

• SB 2 by state Sen. Paul Bettencourt, a Houston Republican, was filed originally with the aim of providing Texans with relief from fast-rising property tax bills. But the two chambers view the bill very differently. State Rep. Dennis Bonnen, who is the chair of the House's tax-writing Ways and Means Committee, has said the bill should instead help Texans better understand how property tax rates are set, why tax bills rise and which taxing entities are charging them which amounts. The House stripped in committee the bill's provisions addressing when cities and counties must get voter approval for their tax rates.

• City leaders, county officials and first responders have rallied against the bill. They worry it imposes a revenue cap that restricts the local government's ability to fund essential services, including hiring police officers, building new parks and filling potholes.

• Want to watch the debates live today? Tune in on the livestream on our site here.

• UT Chancellor Bill McRaven is facing unfamiliar scrutiny from his board of regents about spending and staff levels as he nears the end of his three-year contract.

• Texans who live along the Rio Grande are conflicted in their responses to President Trump's possible border war. Some are afraid or angry. Others welcome the change with open arms.

• The Tribune visited four border counties to learn how people feel about a proposed border wall. Here's a snapshot of our journey.

• The Texas Senate advanced a bill that would crowdfund money from Texans to deal with a state backlog of thousands of untested rape kits. Its next stop: the governor's desk.

• Uber and Lyft are one step closer to a victory in the Texas Legislature. The Senate tentatively backed a proposal that would override local regulations on ride-hailing companies.

• Members of both chambers of the Texas Legislature say they are getting closer to agreeing on a budget for the next two years. But they still haven't come to a consensus on how to fund higher education.

• The Texas Senate tentatively approved a ban on straight-ticket voting, amid criticism that it could dilute the votes of minorities and Democrats.

• A Texas Democrat wants Trump out. U.S. Rep. Al Green called for the president's impeachment from the U.S. House floor.

Explore the weight of a border wall along the edge of Texas, The Dallas Morning News, KXAS-TV (NBC 5) and Telemundo 39 ($)

May 19:  Join us in person or on our livestream as we wrap up the end of the session with state Reps. Rafael Anchia, Geanie Morrison and Matt Rinaldi to assess how the House did. 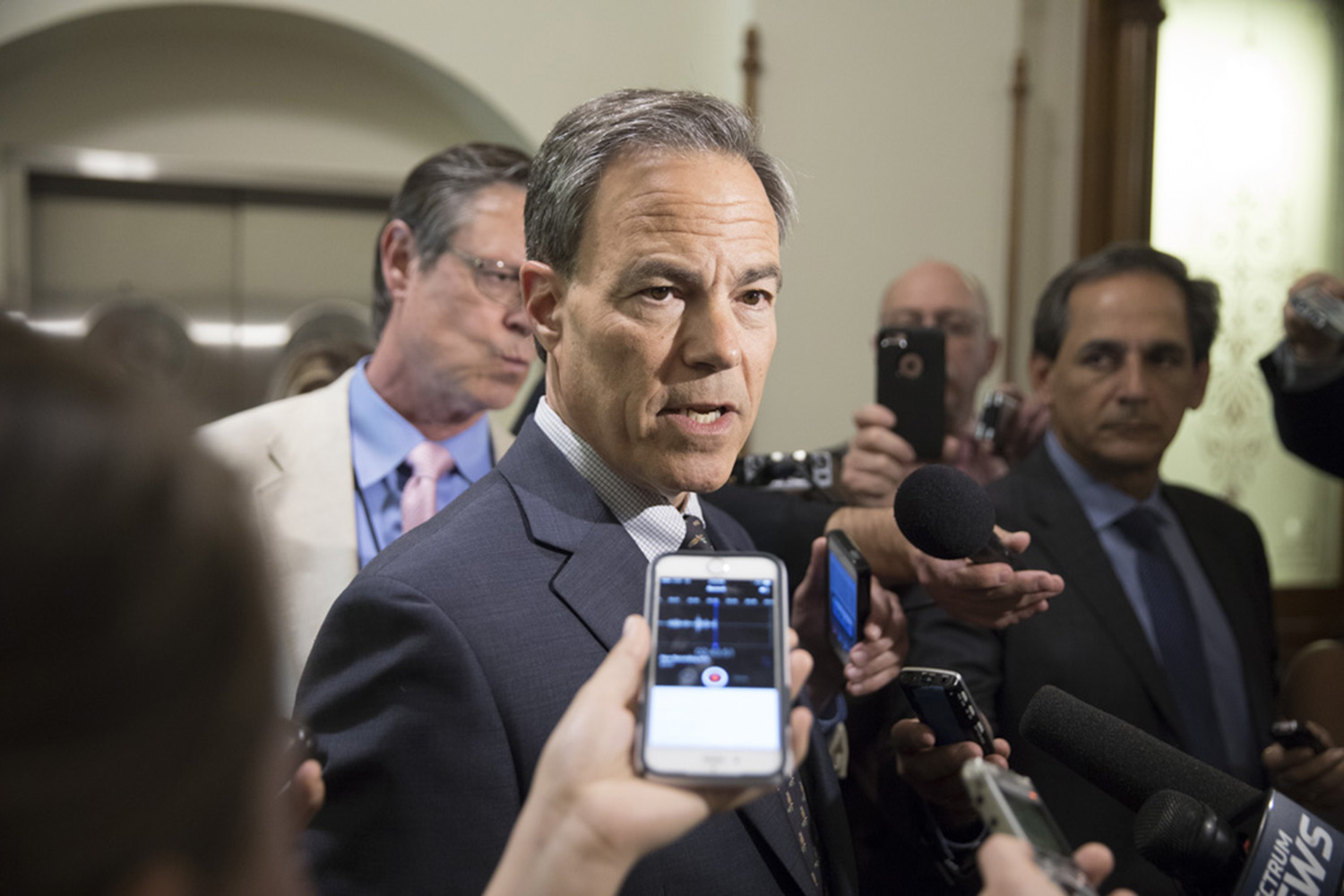 House Speaker Joe Straus gives a hastily-called press conference in the back of the House chamber Wednesday afternoon. Straus responded to comments by Lt. Gov. Dan Patrick, who threatened to force a special session over property tax reform and the bathroom bill. Photo by Bob Daemmrich. See more photos on our Instagram account.

— Maria Villareal, a Texan who lives along the Rio Grande, about fears she may lose her land because of the proposed border wall.